The History of Brussels’ Art and History Museum in One Minute 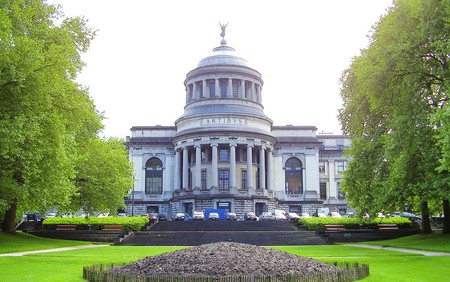 The dome of the Cinquantenaire Museum | © Ben2/Wikipedia

Among the biggest museums in Europe, the Art and History Museum (formerly the Cinquantenaire Museum) in Brussels holds an incredibly absorbing appeal. Forget about losing just a day – a true history buff can spend a week marvelling at the museum’s thousands of artefacts, gathered over hundreds of years from civilisations all across the globe, and decorative arts.

Part of a 30ha (74-acre) domain in honour of Belgium’s 50th year of independence, the museum faces the stretched-out lawns of the regal Cinquantenaire Park, designed at the behest of King Leopold II. Next to it stands the grand triumphal arc, and next to that, two other museums – AutoWorld and the Royal Museum of the Armed Forces and Military History – reflect the sun with their gorgeous glass facades.

As it’s one of the city’s largest museums, walking around the Art and History Museum can feel a bit like touring the world. With every step and every new gallery, another continent’s treasures are revealed. A Chimú statuette, which is more than 800 years old and inspired Hergé to write the Tintin album The Broken Ear, made its way over from Peru. A massive statue from Easter Island lends an air of mystery, while bright wall tiles from Iranian ruler Shah Abbas the Great give the place some colour.

In addition to viewing the riches of multiple cultures, you can also engage in some time travel. The museum’s permanent collection boasts millennia-old artefacts that give us clues to the beliefs of civilisations that came before us. Greek pottery from around 500 BCE tells the tales of mythical heroes such as Hercules, while rare sarcophagi teach us about the expectations the Egyptians had for life after death. A nearly 3,000-year-old relief from the ancient city of Nimrud shows a winged genie ready to take flight. All of these examples, and more, can be found hiding in the galleries of Brussels’ world-class Art and History Museum. Don’t take our word for it: explore it yourself.