The History of Brussels’s La Monnaie in One Minute 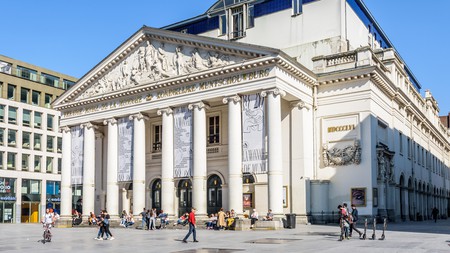 Of all the buildings in Brussels, none have witnessed the joys, the sorrows and even the beginning of the nation quite like La Monnaie has. The opera house is a cultural institution where visitors can enjoy theatre and music, but it’s also a place where you can touch a still relevant piece of Belgium’s history.

After the bombardments of 1695, Brussels had to be rebuilt from the ground up. Italian architects Paolo and Pietro Bezzi placed a new theater on the spot where a coin-minting building used to stand, earning the theater the name La Monnaie (the mint) or De Munt (the coin).

When Belgium became part of the United Kingdom of the Netherlands, the old building was demolished and replaced with another one close by. This neoclassical venue earned national and international recognition as a premiere platform for opera performances, and it’s the site where Auber’s La Muette de Portici opera moved the audience so much that they joined the uproar outside, resulting in the Belgian revolution — and, subsequently, Belgian independence.

After the theatre was partially destroyed during a fire in 1855, architect Joseph Poelaert turned it into a mixture of various styles (neo-baroque, neo-rococo and neo-Renaissance), and the result is the building that still stands today.

The Théâtre Royal de la Monnaie, or Koninklijke Muntschouwburg in Dutch, is where the national opera is housed and is a place where people can enjoy theatre, ballet, opera and classical music. While La Monnaie still maintains its historic ambiance, the theatre itself moves and breathes with everything that happens within the capital and lets it resonate through its cultural programming.