The History Of La Bourse In 1 Minute 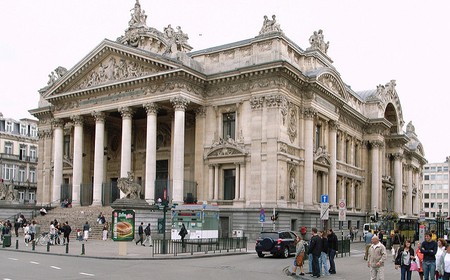 If you’re imagining an old school hustle and bustle when entering the Belgian stock exchange, think again. The stereotypical scene of stockbrokers and traders chaotically waving small pieces of paper around like their lives depend on it hasn’t been around since 1996, the year when trading became completely computerized. The richly adorned building is now transforming itself into a cultural hotspot.

While the Brussels stock exchange was founded by Napoleon as early as 1801, it didn’t find a permanent home until the stately Bourse building came into being between 1868 and 1873. Erected over the site of the dirty river Senne as part of a city-beautification project, head architect Léon Suys went for a neoclassical look, dripping with splendor to emphasize the city’s economic power. Helped by famous sculptors such as the brothers Jacquet and Auguste Rodin, the exterior was made into a statement piece. Greek Doric columns, a bas-relief depicting the city and statues of baby angels and lions all welcome the visitor to the country’s symbol of posterity. 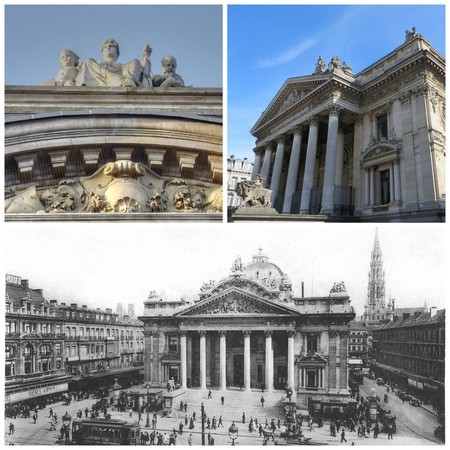 A sculpture atop the relief | © Murali Mohan Gurram/WikimediaCommons; La Bourse and its Greek columns today | © Diamond Geezer/Flickr; The Bourse in the 1920's | © Nels postcard company/WikimediaCommons

Lending its name to the Place de la Bourse, the stately building looks out on a nerve center of day-to-day life in Brussels. Not only is the square an important tram intersection, it’s the place where democratic forces can be seen at work through protests and where the inhabitants come together when there’s a need for solidarity. On sunny days, people can be seen picnicking or chatting on the many entrance steps below the columns.

And the Bourse is intent on not just staying a pretty face. Now that its actual economic function has been lost to the worldwide web, the building is slowly dedicating itself to culture. The venue has already played host to some concerts and graphic expositions, yet the most Belgian thing of all is yet to come. By 2018, the former temple of economy will be home to a bonafide beer museum.

📅 Dependent on upcoming events and/or exhibitions