The History Of Brussels' Grand Place In 1 Minute

A panorama of the Grand Place | © Joenevill/Flickr

A sight for sore eyes with or without its famous flower carpet, Brussels’ most important square is a true beauty. The Grand Place, indeed, makes a spectacular impression, as its lavish façades seamlessly blend together to create a sense of the metropolis in its merchant heyday.

Not much has changed since 1695. The Grand Place’s eclectic architecture (an opulent blend of baroque, gothic and Louis XIV style) has earned it a special standing amongst Europe’s most magnificent squares. For this reason, it has been granted a UNESCO World Heritage label, so tourists from all corners of the globe will be able to marvel at its splendor for ages to come. 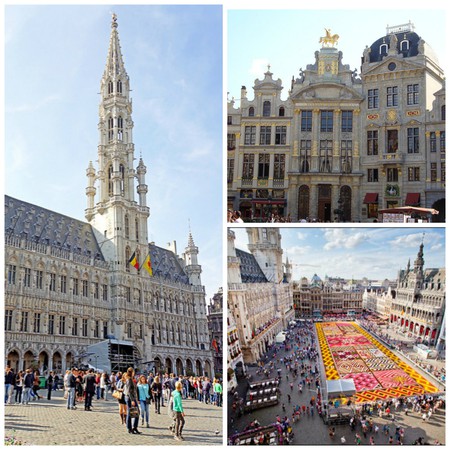 Attentive visitors will notice that the street names surrounding the town square sound awfully food oriented: Herring Street, Herb Market Street, Butter Street and so on. Even today’s Museum of the City of Brussels (keeper of Manneken Pis’ extensive wardrobe) is housed inside a magnificent old building known as ‘the Bread House.’ A cue as to why this might be lies in the architecture of the square. Look around and you’ll notice nearly forty ostentatious guildhalls, all adorned with golden statues intent on emphasizing the city’s 17th-century wealth. Not too long ago the Grand Place used to be a buzzing market place where citizens and tradesmen sold and bought food. It was the heart of a city (and later country) made great by commerce.

Today, the square functions as a meeting place and cultural hub, where events of all kinds bring inhabitants and visitors together. An undeniable highlight is the fragrant flower carpet every other year in August. Over half a million begonias are painstakingly arranged into an intricate tapestry and cover the cobblestones of the Grand Place for one weekend only. The best place to view this visual masterpiece is, of course, from the balcony of the City Hall, another architectural gem with its gothic tower and endless rows of statues.