The History of Belgium’s Abbaye de Forest in One Minute 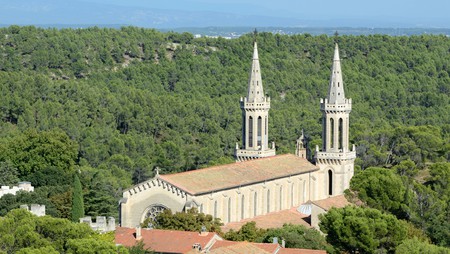 In the middle of Forest, one of Brussels’s 19 municipality regions, there is beautiful Byzantine abbey dating back almost 1,000 years. We tell the fascinating story of the Abbaye de Forest (Abbey of Forest) and its unique historical connection to the surrounding area.

Like most large buildings in the Middle Ages, Forest’s abbey was built for religious purposes. It was initially intended to be built in Affligem, Flanders – after a man named Gilbert van Aalst donated land to the abbey of Affligem – and intended as a priory for the wives, daughters and mothers of crusaders. However, when van Aalst died unexpectedly in 1095, the plans were moved to Forest.

There was already a chapel for Saint Alena and a church for Saint Denis in the parish, both were shared among the sisters and parishioners, until separated by Abbey rules. These nuns became head of the domain in 1238.

While the Abbey flourished thanks to generous donations, it also faced various hardships. It was pillaged during the war between Holy Roman Emperor Maximilian I and Charles VIII of France in the 15th century, after which the plague came to the Abbey, accompanied by famine.

The following century brought the French Wars of Religion, during which the building was set on fire, and in the 17th century yet another war – this one waged by Louis XIV of France – which further damaged the area’s buildings. The abbey was lovingly rebuilt, but then damaged by yet another fire in 1764. It’s nothing short of a miracle that the abbey retained much of its wealth through all these disasters, and was once again reconstructed in the 18th century, when parts were rebuilt in a Neoclassical style.

Abbaye de Forest’s religious life ended in 1796, after it was suppressed and many artefacts from its interior confiscated. The sisters fled to Cologne, Germany with what was left of the religious relics, not returning until the 19th century. What remains of the abbey complex is now a cultural centre, used for art exhibitions and meetings of all kinds. There’s also an annual Medieval fair held in the park, and the spot on which the church once stood is now a playground for children.

Fans of the abbey might be interested to know there’s also a beer named Abbaye de Forest that’s brewed at Silly, Belgium. Though it’s not an officially recognised abbey beer and has no ties to the Abbaye de Forest, it’s probably worth a try nonetheless.