The Flemish Masters Every Art Lover Should Know 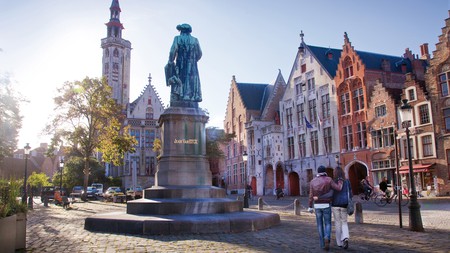 Flanders has been a prominent site for some of Europe’s finest art since the Middle Ages. While the works that have been inspired and fostered by the region can be enjoyed internationally, visiting the northern region of Belgium itself promises an unparalleled experience that lets art lovers gain a deeper appreciation for these influential artists – known as the Flemish Masters.

Credited for his sophisticated use of oil mediums and his sharp optical approach, Jan van Eyck has long been heralded as the ‘father of oil painting’. Despite becoming a widely influential portraiture legend, much of his story remains shrouded in mystery – including details of his childhood. Estimated to have been born around 1390, van Eyck rose to a court painter and in the early 1420s he began receiving commissions to paint some of Europe’s most influential people at the time alongside his religious works. A decade later he set up a studio in Bruges, which would become a pivotal moment in his career: this was the period in which he created The Ghent Altarpiece (1432) (also known as the Adoration of the Mystic Lamb), considered one of the world’s most seminal works of art. 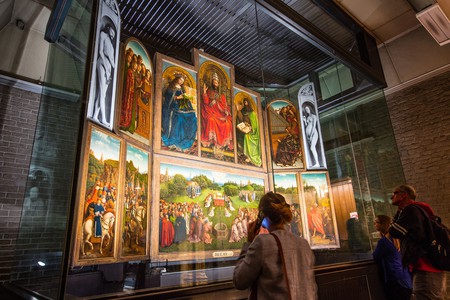 The recent restoration of ‘The Ghent Altarpiece’ has inspired a year of celebrations honouring Jan van Eyck, the man behind the masterpiece | Courtesy of Visit Flanders

As such, it remains the most stolen artwork in history – it has been the target of 13 different crimes and the whereabouts of one missing panel still remains a fascinating mystery. Visitors will be able to see how the altarpiece has been delicately restored when St Bavo’s Cathedral’s new visitor centre opens in spring 2021.

For more opportunities to marvel at van Eyck’s work, travellers to Ghent and Bruges can learn more about this master’s indelible mark on the region through the Colours in Design exhibition at the Design Museum Ghent; it runs until late February 2021. There’s also the chance to experience ‘OMG! Van Eyck was here’; a programme of exhibitions and activities now running through to June 2021. Elsewhere, art lovers in Antwerp can catch sight of his Madonna at the Fountain panel at the Madonna Meets Mad Meg exhibition. See it at the Mayer van den Bergh Museum until the end of the year.

But if travelling isn’t an option yet, you can explore the artist’s unprecedented hues via a curator-hosted video tour in the online Stay At Home Museum.

The Groeninge Museum in Bruges offers another opportunity to delve into the world of van Eyck and other Flemish masters like Peter Paul Rubens, whose emphatic use of colour links closely to van Eyck’s own artful exploration with oil paints. A successful painter, classically educated humanist scholar and key diplomat, Peter Paul Rubens was clearly multi-talented and an important figure within both Flemish Baroque tradition and the cultural and political scene in Antwerp. Born in 1577, Rubens was a court page to a countess, a position that had all the markings of prestige for a young man. However, he spurned it in favour of training as an artist. It wasn’t long before he was appointed court painter and had his own large studio, with a number of artists and apprentices to help accommodate the demand for his now highly sought-after altarpieces. 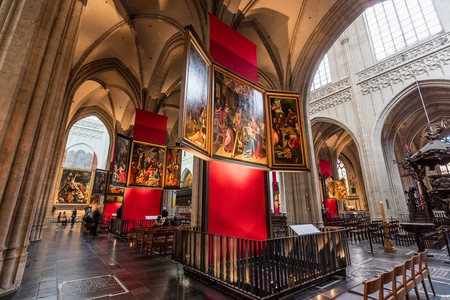 Thanks to his dramatic and grandiose flair and penchant for colour, Rubens’ patrons included King Philip IV of Spain, Charles I of England and the famously difficult Queen Maria de’ Medici of France. His paintings were often quite exuberant religious and mythological masterpieces, and works such as Adam and Eve (1597-1600), and The Annunciation (1610-1628) demonstrate the richness of the Flemish painter’s style, as well as its intensity. Today, these works can be viewed at the artist’s former workshop and home, Rubenshuis in Antwerp (now a public museum), where you can also admire one of Rubens’ self-portraits and his unfinished painting Henry IV at the Battle of Ivry.

A master of landscape painting, Pieter Bruegel the Elder became known as one of the greatest artists in the Northern Renaissance. Much like Jan van Eyck, what is known about Bruegel’s life with certainty remains sparse, but he’s believed to have been born between 1525 and 1530 in the Netherlands. It wasn’t until he moved to Antwerp that he received his first commission, training as a painter and printmaker before joining the folds of the Guild of Saint Luke, an illustrious association of painters. 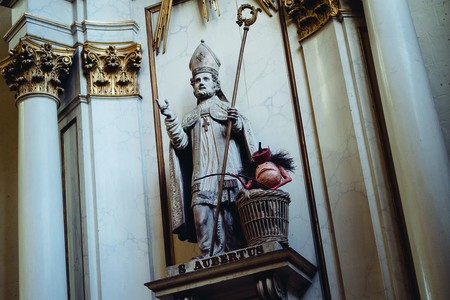 Bruegel the Elder would go on to attain critical acclaim for his portrayals of biblical and fantastical narratives, as seen in The Fall of the Rebel Angels (1562) and Dulle Griet (1562). The works are considered similar in style and composition, and were both inspired by the peculiar figures in the work of Hieronymus Bosch. 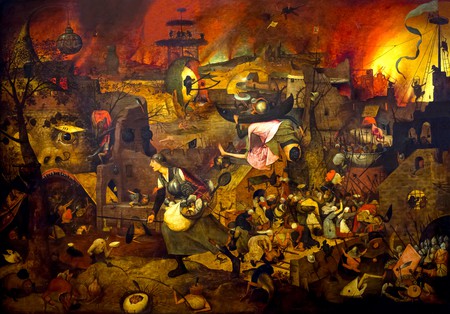 Bruegel had other strings to his bow – the artist also worked as an engraver. The whimsical themes found in his engravings led him to be known as ‘Pieter the Droll’, a rather enigmatic character in the Flemish art world. Bruegel cut an important figure within the Northern Renaissance and played a part in shaping a new and unique style, which can be seen at the upcoming Children of the Renaissance exhibition in the former political and cultural hub of Mechelen, which opens in October. Fans can catch sight of the aforementioned artworks at the Royal Museums of Fine Arts of Belgium in Brussels and the Museum Mayer van den Bergh in Antwerp, respectively.

Dirk Bouts was influenced by Jan van Eyck and Rogier van der Weyden, under whom he may have studied, and is widely considered one of Flanders’ most prominent artists. Bouts is believed to have been born around 1415 and thought to have lived in the Flemish region of Leuven from 1450, before being appointed city painter. Though critics believe his work differed significantly in the expressions of van Eyck and van der Weyden, Bouts is credited as being one of the first northern painters to use a single vanishing point within his work, as seen in The Last Supper (1464-68). 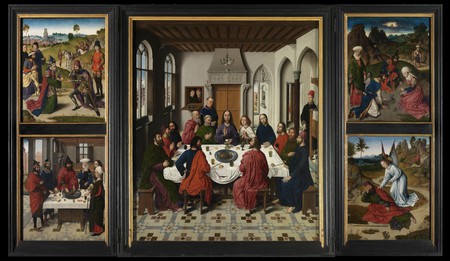 Altarpiece of the Holy Sacrament’ by Dirk Bouts is on display at St Peter’s Church, part of the M-Museum Leuven | Courtesy of Lukasweb.be

Stiff compositions, solemn religious expression and unusually elongated figures all form part of Bouts’ signature style and feature in some of his most well-known works, including Christ Crowned with Thorns (c. 1470), Justice of Emperor Otto III: Beheading of the Innocent Count and Ordeal by Fire (1471-75) and The Virgin and Child (c. 1465). Though not well-known during his time, Bouts has since earned his place as a Flemish Master. From July, the M-Museum Leuven will bring the work of Bouts to life with a new permanent exhibition, Between Heaven and Earth, in collaboration with the restored St Peter’s Church. A ‘sensory experience’ will acquaint art enthusiasts with The Last Supper, now on display at the church, and provide more context to the vibrant and history-packed city where Bouts honed his craft.