The Coolest Neighbourhoods in Ghent

Prinsenhof | Courtesy of Visit Ghent
Ghent has built a reputation in Belgium and beyond as a thoroughly warm and hip city, and a lot of that fondness comes down to a love for its distinctive neighbourhoods. They range from medieval quarters, both touristy and hidden, streets that combine student pubs with cultural temples, and a dockside district where pop-ups have become second nature.

Patershol is Ghent’s standout ancient quarter, filled to the brim with snug restaurants, cafés and art galleries. Its cobbled alleys weave through each other in a truly medieval street pattern that has zero logical reasoning behind it. During its annual festivities, the people hang colourful flag slings and fill the streets with tables where they can drink, mingle and laugh with others, true to Gentenaars’ known jovial nature. Sitting in the shadow of the Castle of the Counts, the Patershol (‘Monks’ Hole’) is a picturesque village within the city, with hailed speakeasy-cum-cocktail bar Jigger’s as a treasured discovery (at least once you’ve found the doorbell that grants access). 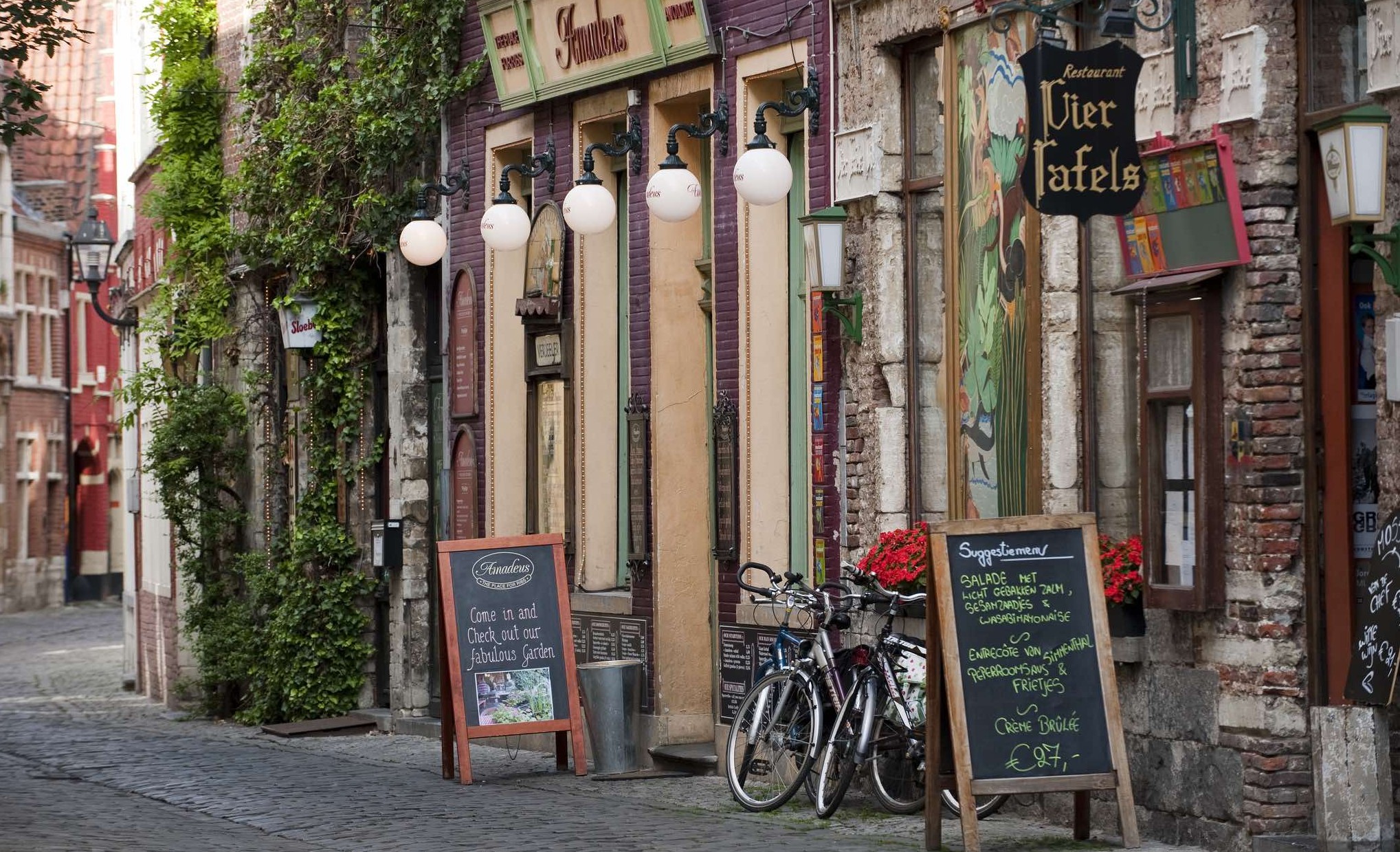 Life at the Kouter revolves around its square, where vendors sell flowers every day, and a more expansive plant market strikes down on Sundays. It’s a fragrant tradition that has persisted since the 18th century, and one that has provided the Kouter with the nickname ‘the garden of all Gentenaars’. Gallivanting is the name of the game here, from one stall to the next – from La Dolce Barista for a strong espresso to the Blue Kiosk for oysters and a glass of bubbly to independent bookstore Paard van Troje for a sniffle between books and a helping of hearty pie. All of this happens to the sounds of a brass band playing its heart out on the square’s beautiful cast-iron gazebo. Dotted all around is a mélange of Classicist bank buildings and 19th-century mansions such as the Hotel Falligan in the Rococo style. 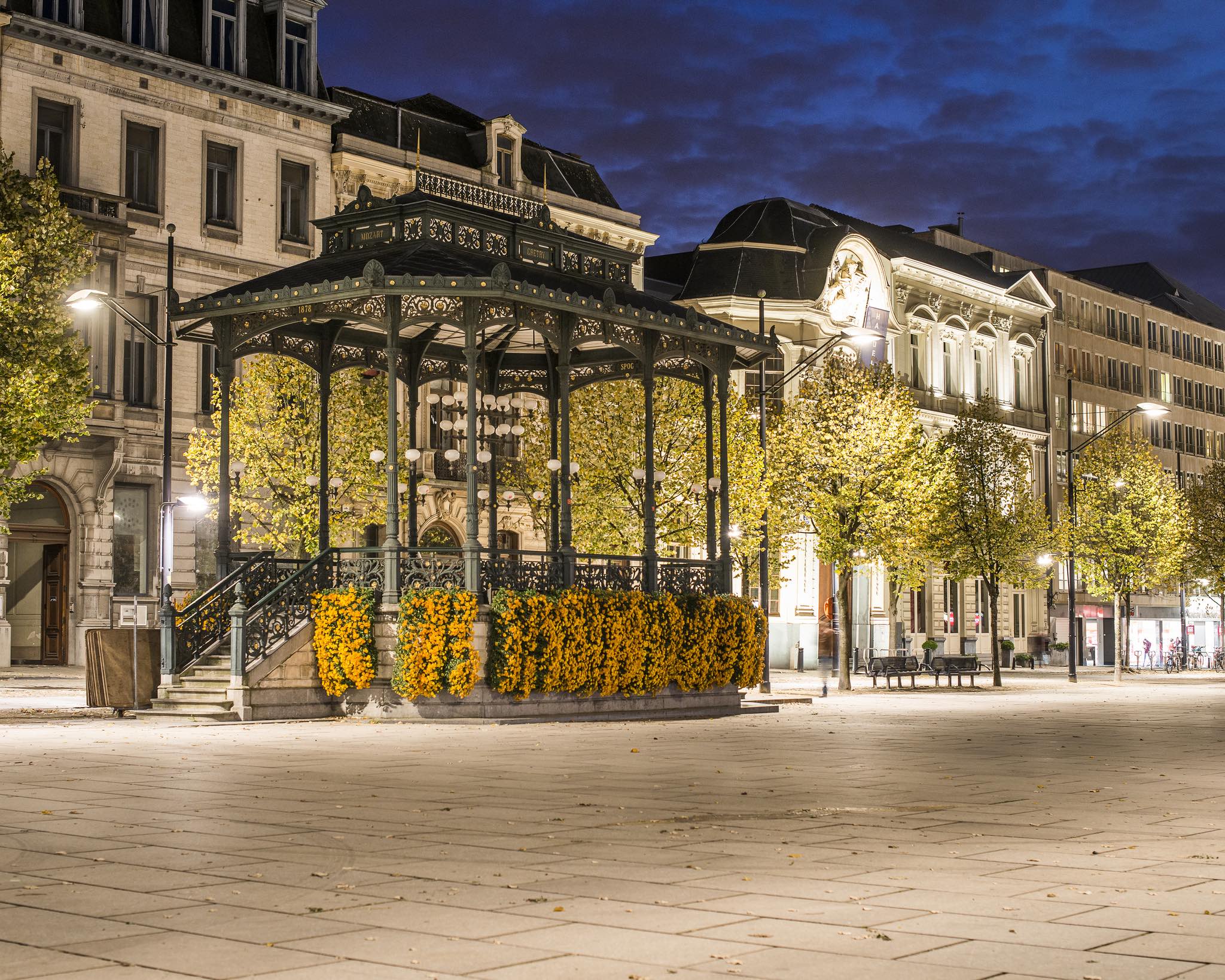 The name of this lush neighbourhood (‘Millionaires’ Quarter’) already tells you most of what you need to know. The residential area, built for Ghent’s nouveaux riches during the interwar period on the former site of the 1913 World Expo, mainly distinguishes itself through a plethora of luxurious mansions, the designs of which almost seem to have been part of a prestige contest among architects. Art Nouveau, Art Deco, Neoclassicist and romantic cottage-style villas are all part of the smorgasbord, and some of the architects even owned some of them, as the homes functioned as an advertisement for their skills. A lot of them enjoy a view of the pretty Paul de Smet de Naeyer Park, which makes for an excellent picnic spot after a gawking tour of the riches on display.

Flanked by canals on either side, the slender Visserij area lies a bit upstream from where the river Leie and the river Scheldt meet. The former industrial district is tranquil, and pastel-coloured townhouses and converted lofts line the neighbourhood’s few streets. Its waterside location, rows of large trees and general boulevard-feel make it one of Ghent’s most pleasant areas for living and biking. The latter is especially true as one of Flanders’ first cycling streets runs alongside the Achtervisserij. 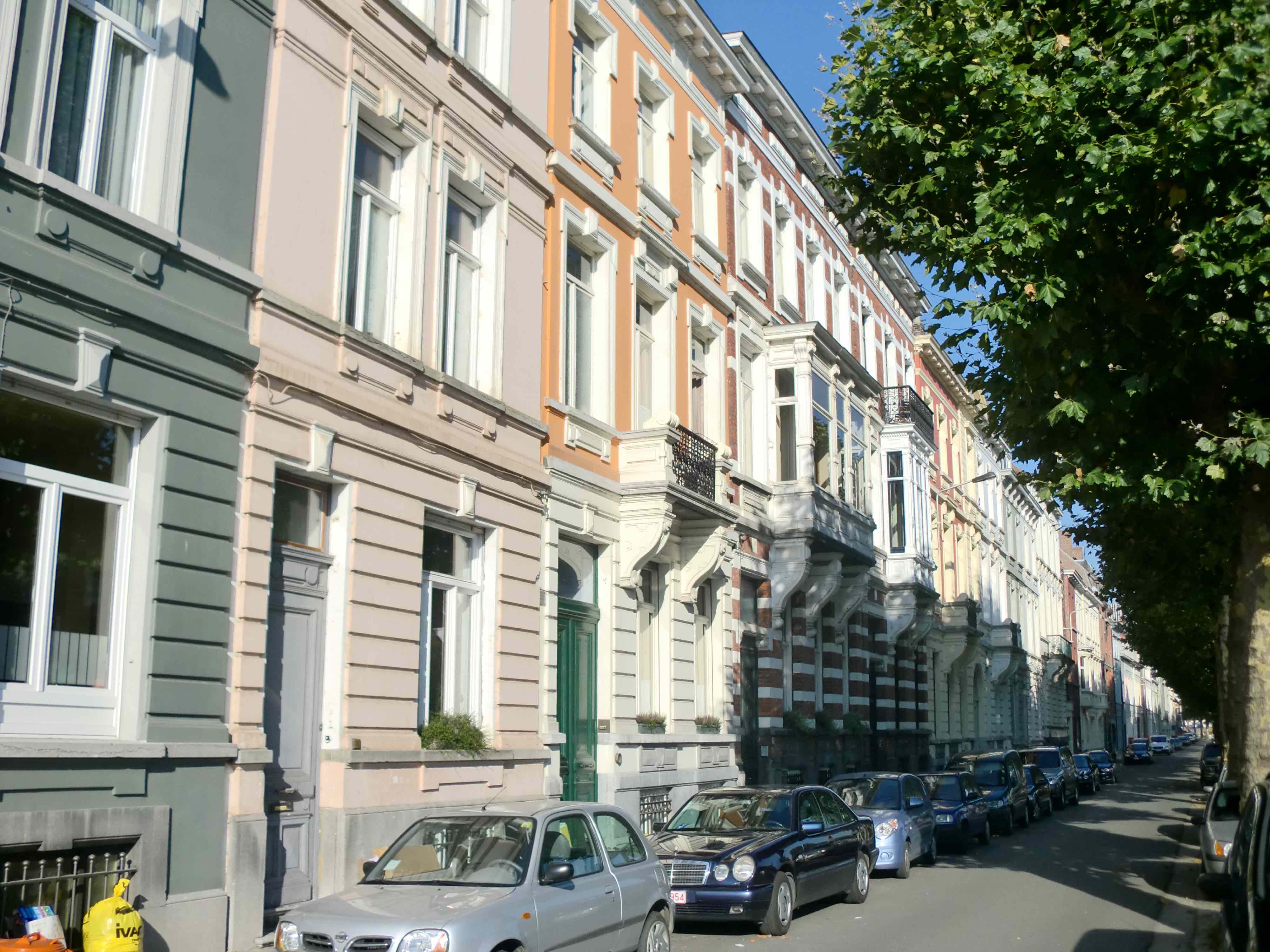 A formerly abandoned dockside neighbourhood, DOK-Noord is currently becoming a lively new urban area. Whilst brand-new apartments and shops are in the works, a site-specific artist collective has already taken it upon itself to turn the docklands into a vibrant getaway from the city centre. Every summer, a pop-up beach, flea markets, charming eateries and bars strike down in an industrial-adorned environment alongside the river. Events such as roller-blade parades, open-air dance classes and drawing workshops have made this vibrant hub a summer fixture of which the effects are bound to echo through once the buildings are up and the new neighbours have moved in.

For an area as charming as Patershol, the Prinsenhof is surprisingly free of tourists. It was here, behind the Castle of the Counts and in a walled-off court with hundreds of chambers and a separate zoo, that Emperor Charles V was born in 1500. A medieval gate is the only thing that’s left of the palace grounds today, but the neighbourhood that has come atop of its ruins radiates a tranquil beauty. Cobbled lanes, deserted stretches of de Lieve canal and 17th-century brick houses go as far as the eye can see in this forgotten residential area, a lovable piece of Ghent. 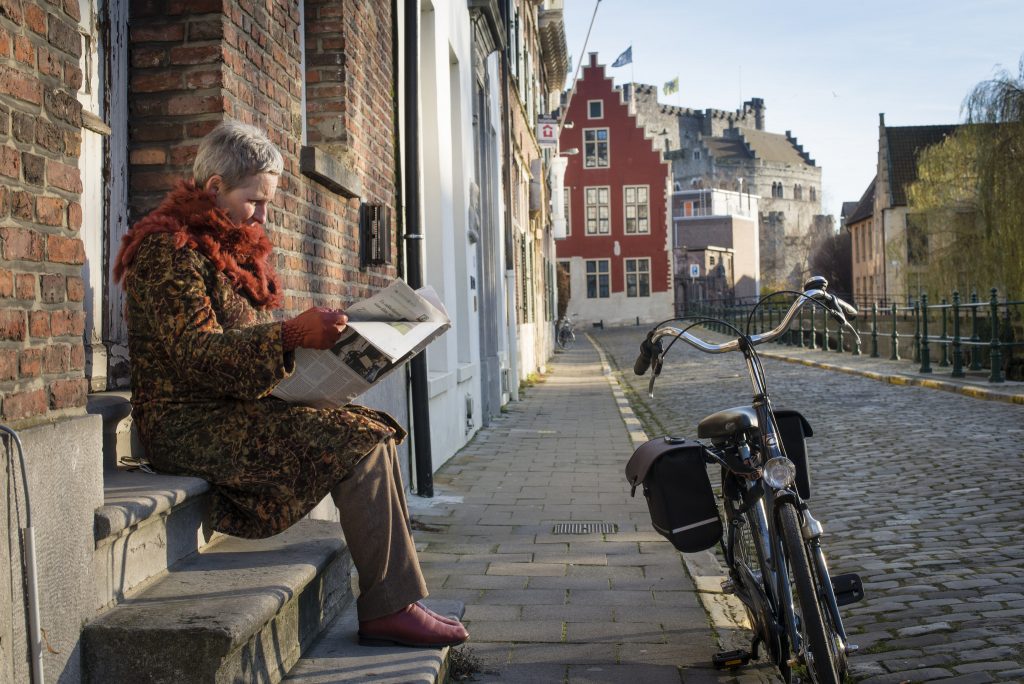 One of Ghent’s most aged streets, the Sint-Pietersnieuwstraat has become a central vein of urban life. From St Peter’s Square onwards, you will bump into chocolate bar Mayana, essential vinyl hub Music Mania, many student pubs, the backpacker-filled Backstay Hostel and finally, the street’s beating heart: cultural temple De Vooruit. Once a socialist hall, the monumental building now hosts film screenings, dance classes, concerts and more, and it seems to have forever carved a spot in the Gentenaar’s heart with its warm and spacious café and floating terrace. 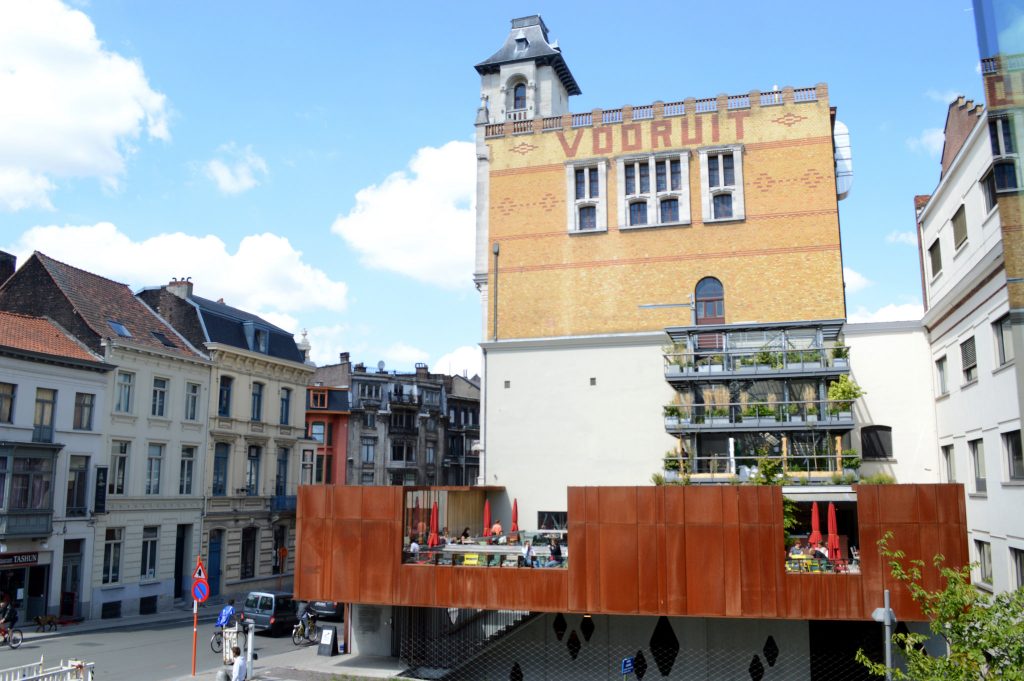