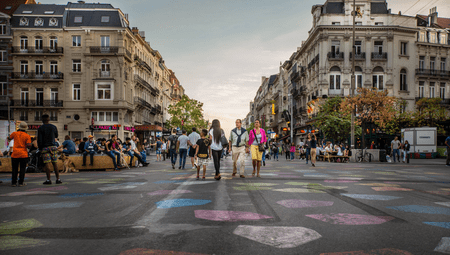 The action in Brussels isn’t confined to just one place. Although now a fairly big capital, Brussels used to be (before the end of the Second World War), a small city with many adjacent villages. Nowadays, it is a universe of multiculturalism and diversity. There are several different aspects to Brussels and numerous ways to enjoy it; we could even say there is one for every taste. Read below for a list of the best walking tours to discover the city.

A part of the historic center of Brussels is called L’îlot Sacré (The Sacred Isle) and is protected by urbanism laws, which make it impossible to modify certain façades. This allows the area to maintain most of its original beauty. Walk along the inevitable – although very touristy – Rue des Bouchers, and take shelter in the Galleries Royales Saint-Hubert, a shopping gallery dating back to 1847 and filled with upscale boutiques. Walking in the historical center sometimes gives the traveler the impression of having gone back in time; the most iconic and scenic part being the Grand Place.

It’s amazing to see the majestic Gothic and Baroque buildings; especially when coming from the narrow streets that are so discrete, it is really hard to anticipate what is coming. Definitely stop to take a look at the City Hall, whose 96-meter-high Gothic tower is considered a masterpiece, and was designed by the famous Flemish architect Jan van Ruysbroeck. Then, pass by the inevitable statue of the peeing boy – Manneken Piss – onto the Bourse (Brussels Stock Exchange). The big Boulevard Anspach is now closed to car circulation, which makes it a great place to relax and observe the crowd, especially after a long day of sightseeing. 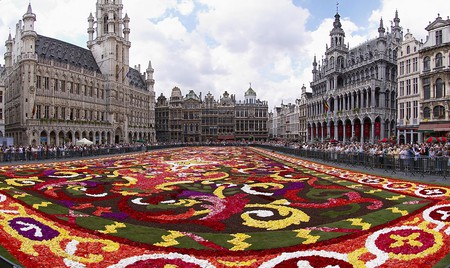 Indulge in the chocolate city

Belgium might not be very well-known when it comes to cuisine, but getting your hands on some chocolate is a must. The center is bursting with shops that compete with one another to attract passersby. You can stick to the commercial spots, like Leonidas, Neuhaus or Godiva. But if you really want to experience some original material, go to Place du Grand Sablon.

This is where Pierre Marcolini’s superb store is located, and unlike its more commercialized counterparts, it visibly invests in design (whether it be of the chocolates or the store itself). This, in turn, makes the whole process of buying goodies a whole new experience. Other classics include Galler, closer to the Grand Place. And while you are at it, take a peek at the Museum of Cocoa and Chocolate. There are also tours for those who want to be guided trough the process, and they provide a workshop at the end. 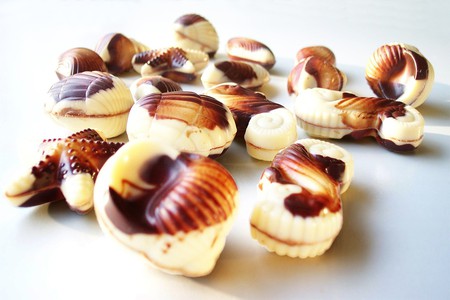 This has to be done, even for those who are abstemious. No other country in the world possesses this range of color, taste and character when is comes to beer. Sandemans New Europe generally has different types of tours that are fun, original and well-informed. During the beer tour, they take you to some bars, including the Delirium Beer Café, possessor of an admirable array of 3,000 different types of beers. But if you want to enjoy the national drink independently, just look up other major experts in the matter, like À la Mort Subite. This café, opened in 1928, has a very different spirit from the typical touristy pub, and although very popular and crowded at times, seems to be able to keep some of its original spirit. 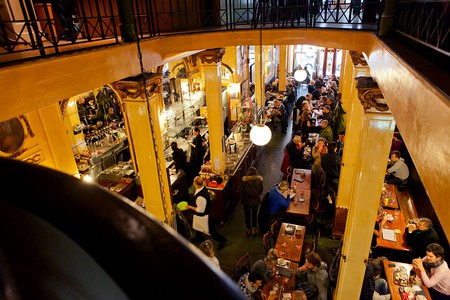 Belgium is one of the most progressive countries in the world when it comes to gay legal rights. In 2003, it became the second country in the world to legally recognize same-sex marriages. There are a few very famous parties, like La Demence (men only), well-known for being an event of excess and debauchery. Velvet 69, on the other hand, is an all-girls party that also happens periodically and has met with huge success. If, however, you are not really into clubbing, a walk in the city center could take you on a tour to a generous amount of very decent gay bars. Most of these establishments are located around Rue Marché au Charbon, which is quite useful because it allows the visitor to pick and choose a number of places to visit. A few suggestions: Chez Maman and Belgica. 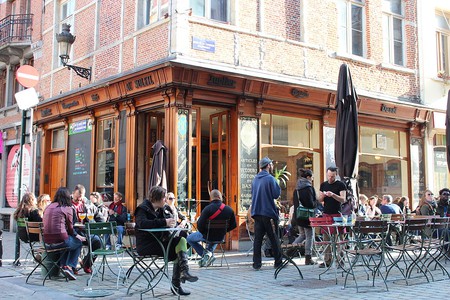 Welcome to the heart of the EU

The institutions and adjacent neighborhoods constitute almost a different city; creating a unique economic and political vibe within Brussels. Because most of the buildings were so recently created (a number are still under construction), the landscape might appear a bit rough at times, which makes walking around this European area not the greatest of tours for architectural beauty. It is, however, a unique experience to see how people from all over the world are attracted to the political center of the continent, whether it be for business, work, or studies. This showcases the unique energy of the city. 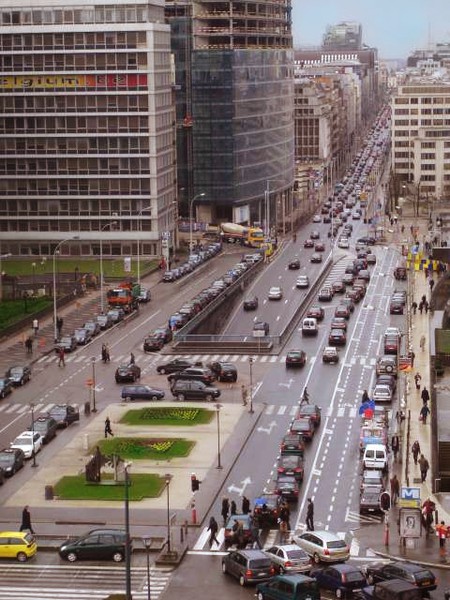 Avenue Louise is an iconic part of the city. The first stretch is the fanciest, where some of the best high-end shops can be found, such as Louis Vuitton, Channel, Versace… you get the picture. Keep going up the avenue and you will run into the Belgian yuppies, whose offices are located in some of the skyscrapers located in the area.

As you approach the Châtelain area, expect to find famous bars like the Irish pub Michael Collin’s. In fact, Châtelain is not only one of the most beautiful residential areas in town, but also prolific in bars and restaurants, like the Supra Bailli, whose balcony is always very animated. Finally, at the very end, green starts to show as the visitor enters the Bois de la Cambre, a great wooded area that serves as a great spot for your next jog or hike. 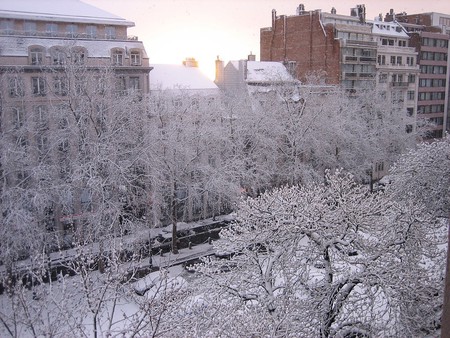 When we think of Belgian comic strips, Tintin inevitably comes to mind. But guess what? This is but one of the many famous characters created by the Belgians. Take Gaston Lagaffe, for example, a young man always getting into trouble. He was a huge success in France and Belgium and has a mural dedicated to him in the city center, next to De Brouckere metro station, and he is not the only one.

There are plenty of other murals dedicated to cartoon characters, like Nero, created by Marc Sleen, in the nearby Saint Gery. Marc Sleen, the Flemish artist, was so famous that he even has a museum dedicated to his work, in Rue du Marais, the place where the Belgian Comic Strip Center is also located. But of course, Tintin is inevitable, and his mural is also in the center, on Rue de l’Étuve. Other interesting places to look around in the same area are the Museum of Original Figurines (with over 3,500 comic strip figurines) and the Galerie Brüsel, a prestigious comic strip shop. 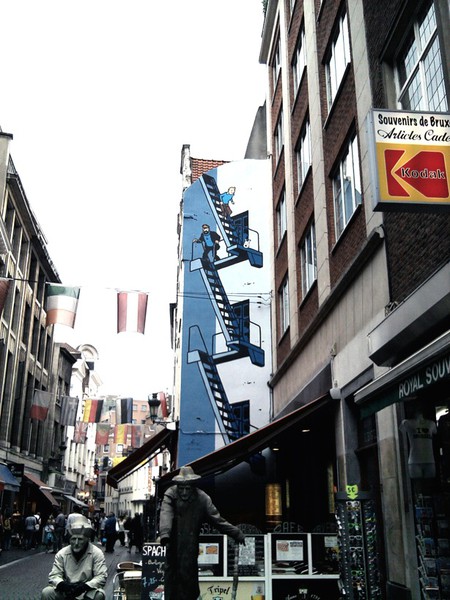 He is one of the most famous francophone singers of all time, and although he lived most of his adult life in France, it was in Brussels, his hometown, that he spent his youth. Editions Jacques Brel offers an exhibition dedicated to the singer, and also a walking tour with the aim of seeing the city from his perspective. Brel had a very emotional relation with his home country, as can be heard in his songs. His daughter, France, gathered interviews of Jacques and some of his most intimate relations, like his wife, and his friends. Here, the visitor can have access to some of the concrete spots that were sources of inspiration. 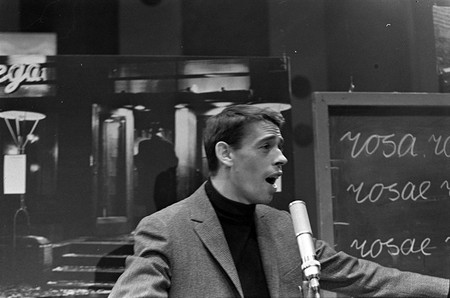 Jacques Brel during the shooting of the KRO Television Show, in 1963 | National Archive, The Hague (ANEFO) @Wikicommons
Give us feedback