The Best Moments Ever At The Tour Of Flanders 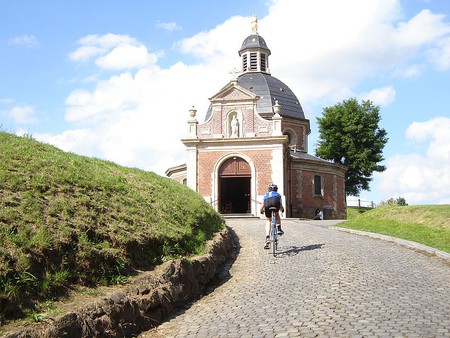 The Muur van Geraardsbergen, one of the most notorious parts of the Tour | © LimoWreck/Wikimedia Commons

‘The Hell of the North’, ‘Flanders’ Finest’, ‘the Flemish High Mass’ – the Tour of Flanders is challenging and punishing but, above all, beloved. Winning this classic is one of the greatest achievements a Flemish cyclist can strive for, as underscored by the stream of tears flowing further down this list. Here’s our overview of seven unforgettable moments the Tour has produced along its narrow, cobbled roads and notorious climbs.

Henri Van Lerberghe – or ‘Ritte’ as most called him – was fighting at the Ypres Salient four months before he appeared at the starting line of the third Tour ever with a borrowed bike in hand, having come straight from the frontlines. As was the thirty-year-old cyclist’s M.O., he told all his opponents he would ride them to death – and proceeded to do just that. A lone wolf to the bone, Ritte convinced another cyclist’s helper that the cyclist was already out of the race, taking the food for himself. Encountering a stationary train at a rail crossing, Ritte lifted his bike on his shoulder and climbed through a wagon to the other side – or so the legend goes. And, as he approached the finish line, Ritte’s lead was so immense that he stopped at a local pub to refresh himself with a few brewskis. As soon as coach Oscar Braeckman got wind of this, Ritte was coaxed out to finish the race. Entering the final stretch, he told the fans they could all go home because he was ‘half a day’ ahead of the peloton. In reality, Ritte would bag the victory with a 14-minute lead and a pleasant beer buzz, a record that stands to this day. 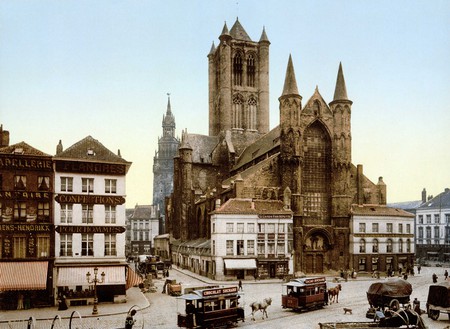 The Korenmarkt in Ghent, starting point of the very first Tour of Flanders in 1913 | Wikimedia Commons

1961 – The time a blown-away finish made Defilippis flounder

Brit Tom Simpson had luck on his side for his first major win as a professional cyclist. Kicking off the one-on-one sprint against Nino Defilippis a kilometer before the finish, he withered and the faster Defilippis took over – that is, until the Italian began freewheeling too soon: a gust of wind had blown down the finishing barrier and Defilippis, by his own account, couldn’t see the finish line (though the judges disputed this at it was clearly signalled on the road as well). Simpson swooped past on Defilippis’ other side to take home the first British victory in a classic since 1896.

Wonderboy Eddy Merckx had over 70 kilometers to go when he broke away from the peloton in 1969 during a particularly windy and rainy edition of the Tour. Lomme Driessens, director of team Faema, declared the young Merckx insane for wanting to continue, tapping his finger against his head. ‘Kiss my ass, I’m going’, was the response of Belgium’s most legendary cyclist. A solo triumph led Merckx to his first Tour win with a gap of 5.5 minutes between him and runner-up Felice Gimondi. 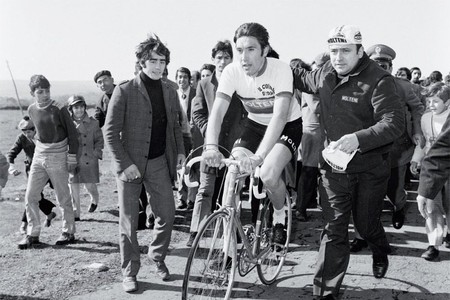 1975 – The time Merckx started to double the peloton

Proving once again what a phenomenon he was, ‘the cannibal’ came close to actually riding circles around his peers in 1975. This time, it was over a 100-kilometer stretch to the finish, on the Oude Kwaremont hill, that Merckx made his move. The only man able to keep up with him was Frans Verbeeck, and together they nipped the early escape of Dirk Baert in the bud and left him behind like a ton of bricks. ‘Fred man, he rides five kilometers an hour too fast for us’, Verbeeck, who crumbled six kilometers before the finish, would tell reporter Fred Debruyne in an interview right after the race, with Merckx within earshot. To some riders’ horror, Merckx had even started to double up on his competitors, who were just starting the local round of 11 kilometers.

It may have been clear that young Edwig Van Hooydonck was bursting with talent but, come the Tour of Flanders 1989, no one was counting the youngster among their favorites to win, generally believing that it was too soon and he was too green. Van Hooydonck proved them wrong by unleashing on the Bosberg, a terrain he’d practised on religiously for months. The young rider won in an unexpected tour de force. As Van Hooydonck let the tears fall while holding his cup aloft, Flanders fell in love with the modest victor.

1994 – The time Museeuw got fooled by two Italians

Belgian Johan Museeuw was heading to his second Tour victory in a row when he put his trust in the wrong man. While heading to the finish with four riders in total, Museeuw asked ex-teammate Ballerini if he would lead the sprint for him. Ballerini, not a strong sprinter himself, nodded – and then nodded again when fellow Italian Gianni Bugno asked him to delay Museeuw instead. Ballerini never kick-started the sprint, and when Museeuw tried to go after a speeding Bugno, Ballerini blocked him so he was forced to take a slight detour. The Fleming had put into motion a chess game that the Italians finished when Bugno took the trophy after a thrilling photo finish. 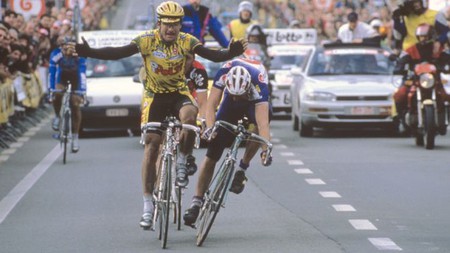 In 2005, 24-year-old Tom Boonen pushed aside Erik Zabel, Peter Van Petegem and Andreas Klier in spectacular fashion to claim his first Tour of Flanders win, marking the beginning of the Fleming from Balen’s ascent to the top tier of road cyclists. The following week, he took Paris-Roubaix, and that same season he won the rainbow jersey at Madrid’s World Championship. Tornado Tom had arrived. 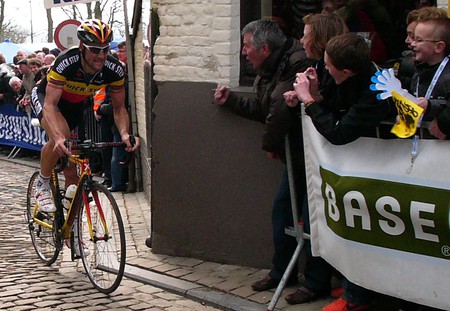