The Best Metro Art In Brussels 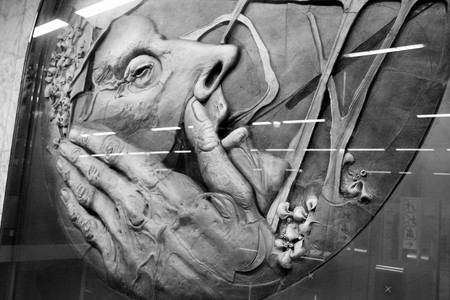 Take an unusual tour and uncover the background behind the stunning works of art in Brussels’ metro stations. From one end of the Belgian capital to the other, you will get acquainted with stunning sculptures, photographs, and murals displayed on platforms, corridors, or ticket halls. Catch your train and let it lead you to the most beautiful stations in Brussels. 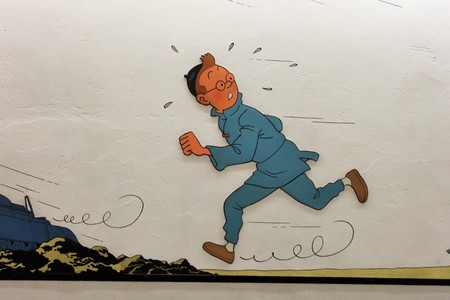 In the ‘capital of comics’ there is always a place for its most famous cartoon hero Tintin. More than 140 life-size characters from Tintin’s world are featured on 135-meter-long walls of this terminus platform. The mural Tintin dans le métro was designed by Hergé, the creator of the Adventures of Tintin, shortly before his death. The whole mural scene is playful and dynamic, so you can easily become a part of it when running after your train, or just admire it as you wait for the next one.

On the platform walls, eight faces gaze at the passengers passing by in the Maelbeek station. The lines of the simple-looking faces are clean and look as though they have been drawn with a giant black permanent marker. One could even think they were drawn carelessly or in a haste as there is nothing on the white walls but contours. The portraits designed by Benoît van Innis refer to the faces of travelers in the metro, which are anonymous just like those faces.

Exactly 16 mannequins fly above the rails of the Comte de Flandre station. It looks like they are trying to reach a group of planets ahead of them. 16 x Icarus is the work of Paul van Hoeydonck, who also created the Fallen Astronaut – an aluminum sculpture that was placed on the moon by the crew of Apollo 15. If you want to see this artistic space journey of mannequins, just look up after you get off the train. But do not forget to mind the gap! 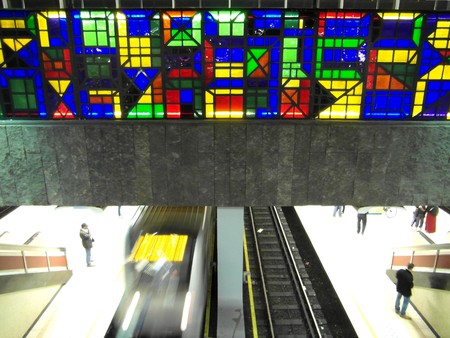 Through the stained glass window, the sunshine finds its way into the Beekkant station. This geometric abstraction by Guy Vandenbranden is thoughtfully designed: it plays with both color and basic geometrical shapes, which come repeatedly but always in different forms. It is even more beautiful during sunny days – if only the sun in Brussels would appear more often. 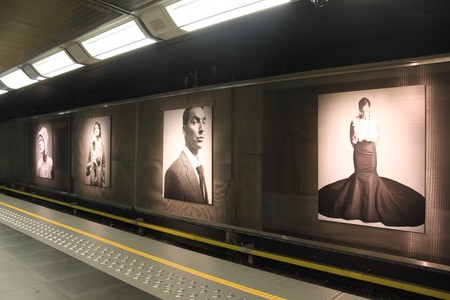 In Gare de l’Ouest you might have a feeling you just accidentally walked into a photo studio – large illuminated photo portraits emerge from the dark surroundings. Not surprisingly, the author of these striking photos is Stephan Vanfleteren, well known for his black-and-white photographs of celebrities. However, the faces from the station gallery are not famous individuals from magazines or television, these models are just ordinary people from Brussels. These photographs represent people of all kinds without distinctions and aim to represent the cosmopolitan nature of Brussels. 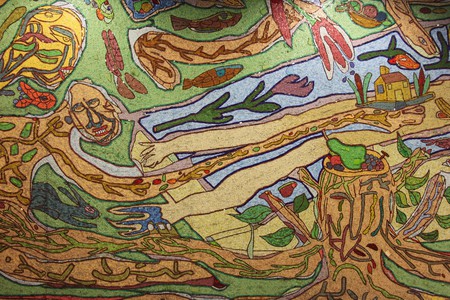 The lively mosaic in the corner of the Rogier station attracts attention of passersby with its colors and shine. This work is part of a campaign aimed at raising public awareness about the issue of poverty. The author of the piece, Gino Tondart, indeed got a bit of a help; the campaign was supported by as many as 270,000 petitioners, and each one of them contributed with a little piece of the mosaic. That final outcome became a symbol of their action and a manifestation of the campaign’s slogan Donnez la couleur à la solidarité – Give color to solidarity. 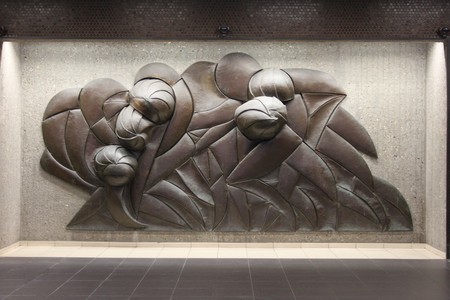 Right behind the turnstiles, a relief in copper made by Reinhoud D’Haese catches the attention of every – even a hasty – metro passenger. The piece Stop the Run symbolizes a collision of such passengers in hurry. The passengers cannot be precisely identified and they resemble a group of rugby players in action. Nevertheless, when observing the piece along with its environment, you realize that very few pay attention to Reinhoud’s words. 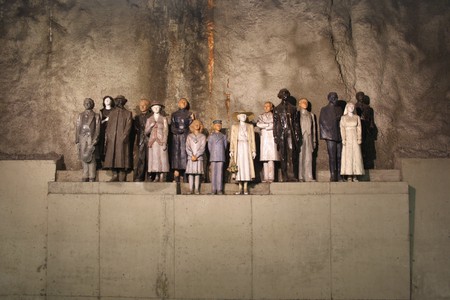 The terracotta statues at Stuyvenbergh station are a tribute to Queen Elizabeth and the royal family. It is not a coincidence that this homage took place at this station, in fact the Queen’s last residence was the Stuyvenbergh Castle. The artist Yves Bosquet displayed Queen Elisabeth in different roles, including as a mother and as a grandmother. If it seems to you that you can recognize Albert Einstein among the sculptures, do not be surprised. Bosquet portrayed Her Majesty also among her close friends, Einstein being one of them. 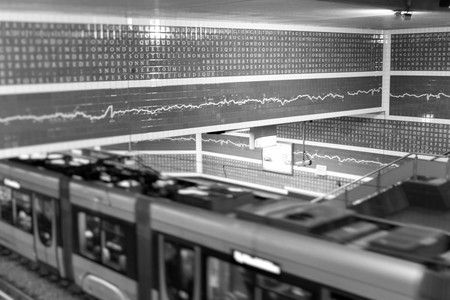 Françoise Schein artistically has interpreted the Universal Declaration of Human Rights at many places around the world. Besides Paris, Stockholm, Haïfa, Berlin, Lisbon, and London, the Brussels station Parvis de Saint-Gilles is one of such places. White letters on a blue background compose an amazing text mosaic, and the work itself measures an impressive 1,200 square meters. If you want to read it, it could take a while, as it is not easy to read a text without spaces and punctuation.