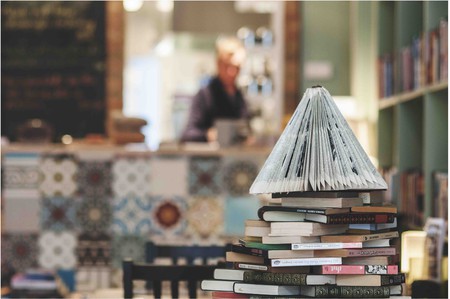 For all of the quaint qualities Bruges possesses, you can add bookshop haven to that list. Idyllic, as travellers from across the globe describe it, and bursting with Old World charm, it seems fitting that Bruges should count so many decades-old houses of literature. Here we share eight unmissable bookworm addresses plus a glimpse at a nearby village baptised an official ‘town of books’.

Lazy days are well-spent at Books & Brunch, a convivial book café on the Garenmarkt Square. Used books line the walls, which you can peruse with an espresso in hand, read from a cosy chair on the mezzanine, or buy for an apple and an egg. Rumbling tummies are taken care of with homemade soups, quiches, salads or sandwiches, all made with organic and biological produce. Word of mouth about the American pancakes and delectable cheesecake has travelled fast, but somehow, as popular as it is, Books & Brunch remains a peaceful refuge from an otherwise very touristy town – maybe it has something to do with the fictional worlds gathered on its shelves. 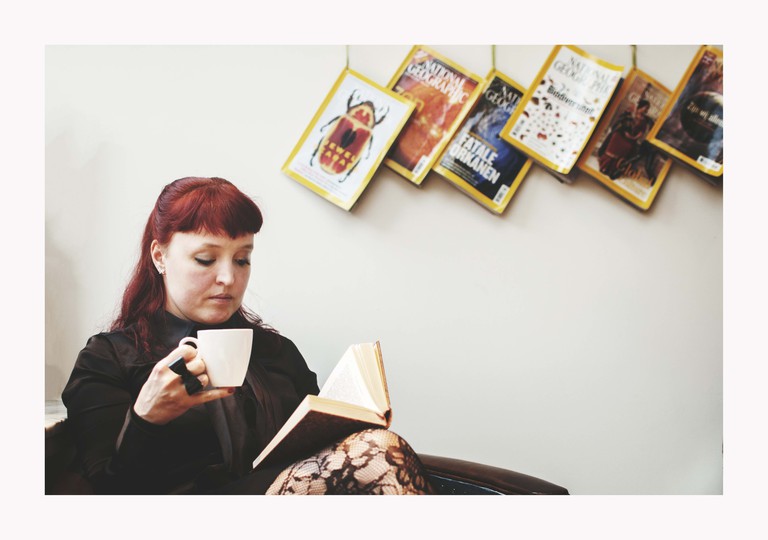 A household name in book-loving Belgium, Bruges’ De Reyghere (‘The Heron’) has three shops under its wings: the original on the ancient main market, its travel shop next door, and its outlet store on one of the streets leading up to its square. Run today by Yvonne Steinberger, the great-granddaughter of founder couple Julie Laridon and Edmond De Reyghere, and her son Thomas Barbier, this reliable literature temple has been carrying a torch for paper books you can actually touch and smell since 1888, making it the oldest bookshop in the country’s Dutch-speaking half. Authors regularly show up for readings or talks in its literary salon upstairs, which also forms a cosy discussion corner during the meetings of its book clubs. 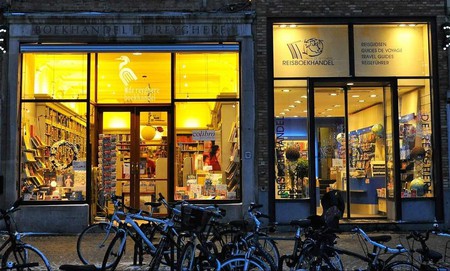 Bookstore, Library, Shop
Facebook
Email
Twitter
Pinterest
Copy link
Share
Map View
Over half a century old itself, Raaklijn bookshop knows and appreciates its classics. Jean Dhartet, now a sprightly octogenarian who has dedicated his life to the book trade, has always combined an expansive selection of longtime must-reads with the better contemporary publications, i.e. the stuff the owner and his dedicated team consider the high-flying literary gems of the day. Raaklijn sits snuggled up against Bruges’ library, a suitable location for this earnest shop.
Open In Google Maps
1 Kuipersstraat, Brugge, Vlaanderen, 8000, Belgium
+3250336720
Visit Website
Give us feedback 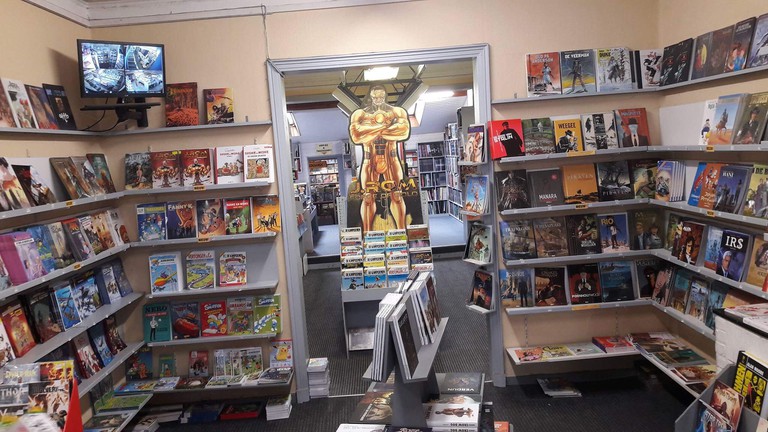 De Striep | courtesy of De Striep
Carrying the flag for Belgium’s rich comic book history in Bruges is De Striep, a multi-roomed shop with passages made narrow due to encroaching album bins. Besides contemporary graphic novels for all ages and in multiple languages (including English), the comic Valhalla also has a hand in figurine collectables, exclusive posters and other gadgets. Prices swing from a cellar cornucopia of second-hand Spike and Suzy albums to special edition screen prints of Belgium-hailing ‘boy reporter’ Tintin.
Open In Google Maps
42 Katelijnestraat, Brugge, Vlaanderen, 8000, Belgium
+3250337112
Visit Website
Give us feedback

Building, Cathedral, Shop
Facebook
Email
Twitter
Pinterest
Copy link
Share
Map View
Illustrated gems from the 15th through the 20th century make up the collection of Marc Van De Wiele, an intensely passionate bibliophile who’s been specialising in the stuff since 1976. While especially valuable finds such as medieval manuals dealing with witchcraft get sold at the antiquarian’s bi-annual auction, lots of intriguing art books, atlases, family trees and works that deal with Belgium’s rich past are still available straight from the shop in a handsome corner building across from St Salvator’s Cathedral.
Open In Google Maps
7 Sint-Salvatorskerkhof, Brugge, Vlaanderen, 8000, Belgium
+3250336317
Visit Website
Give us feedback 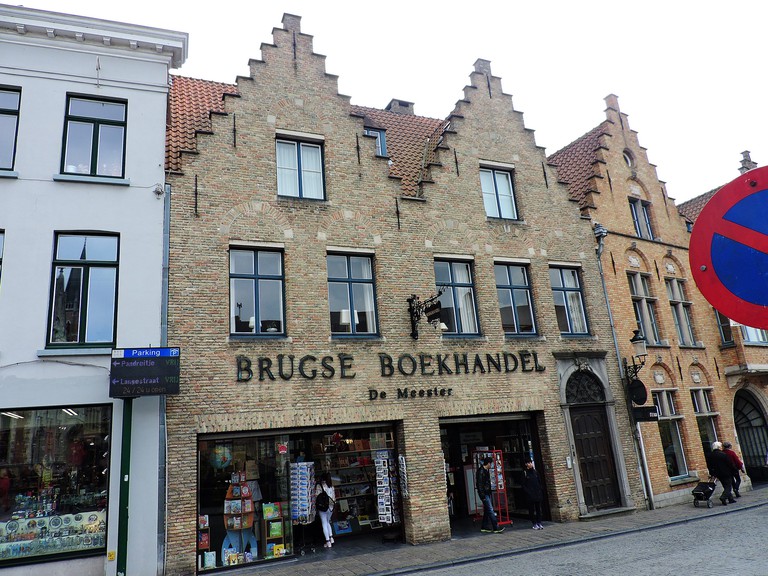 Brugse Boekhandel | © Dimitris Kamaris / Flickr
In 1934, Brugse Boekhandel (‘Bruges Bookstore’), also known as ‘De Meester’, struck down on the Dijver by the waterside to stay put to this day. Among a rather general offer, this golden oldie harbours a particular love for its city with postcards, tourist guides, Bruges-themed history books, and a rare selection of works dealing with that delicate Bruges speciality, lace, in several European languages (including English). The family-run shop, now on its third generation, also boasts a wide range of children’s, YA and fantasy fiction.
Open In Google Maps
2 Dijver, Brugge, Vlaanderen, 8000, Belgium
+3250332952
Visit Website
Give us feedback

Store
Facebook
Email
Twitter
Pinterest
Copy link
Share
Map View
In Den Eenhoorn (‘In The Unicorn’) in the increasingly attractive Ezelstraat lane lives up to its name: this is where bibliophiles who have been looking for that one elusive title stand a great chance of finally finding their unicorn. Granted, you’ll have to dig through teetering stacks of magazines and banana boxes packed to the brim with dusty novels first. Luckily there’s Titia, the kind-hearted owner at the helm of this charitable literature enterprise – books start at five cents and don’t go over 30 euros – who has helped many a wary customer in their odyssey for that one unfindable treasure by way of excellent customer service and phone calls. Its collection comprising tens of thousands of titles isn’t online, so you best make your way over to this quaint store that’s well beyond ‘cluttered’: Titia’s place essentially looks like a well-organised hoarder’s house, just a hoarder with a pervasive love of nothing but literature.
Open In Google Maps
131 Ezelstraat, Brugge, 8000, Belgium
+3250334246
Give us feedback 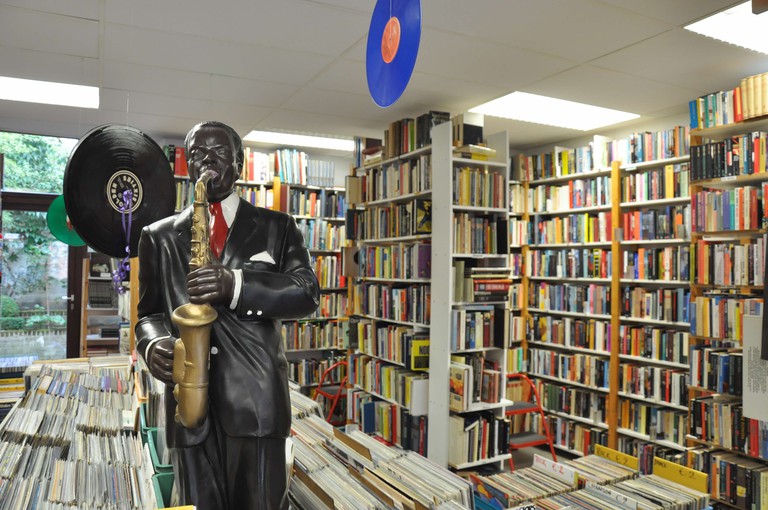 Den Elder | courtesy of Den Elder
More obscure publications and coffee-table books that show Bruges in a series of iconic postcards line bookshelves at Den Elder, the town’s well-known rummage den, especially when it comes to books and music. Long-lost LPs, novels, non-fiction, comics and even CDs are given a second chance at life at this collector’s shop. It is a ragged charmer that’s been around for over 35 years, and for good reason.
Open In Google Maps
84 Langestraat, Brugge, Vlaanderen, 8000, Belgium
+3250341829
Visit Website
Give us feedback

A trip to Damme

Damme shines in a lot of tourist guides as a lovely day trip from Bruges, due to its picturesque windmills and 13th-century Town Hall, but even more attractive to the bookworm is its official status as a proud Book Town (since 1997). The Town Hall, for example, isn’t just a splendid piece of Gothic architecture; from its side façade, the tiny awnings of Feniks peek out, a hint at the location of what’s suspected to be the tiniest bookshop in the Low Countries. Tall customers are forced to duck underneath its low door, and barely 10 people fit inside, but so do about 5,000 second-hand and rare books. On sunny days, the owners Guido and Willy pile up some of their stock on little folding tables while chatting amiably with their clientele through their window.

Equally enchanting is Diogenes, another Lilliputian antiquarian located in a brick-wall establishment that is brimming with small-town charm, just around the corner from literary folkloric hero Tijl Uilenspiegel’s museum. Diogenes carries a few new publications, but second-hand history, philosophy and art books are its forte. There are several more of these literature havens in Damme, including a book market every second Sunday of the month, no matter what the season. In winter, vendors move their second-hand offerings inside City Hall. 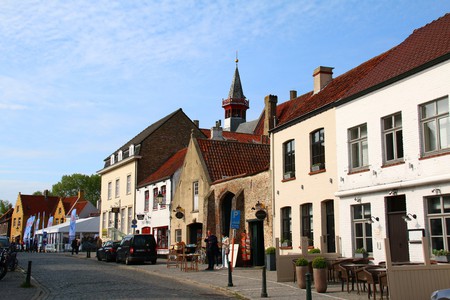 A Damme street scene, with bookshop Diogenes pictured in the middle | © Alain Rouiller / Flickr
Give us feedback