The Best Beer Festivals in Belgium 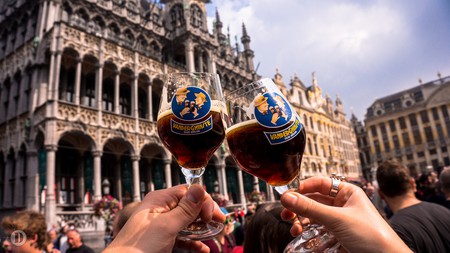 True epicureans are no stranger to Belgian beer, but the country’s dedicated brewing culture makes sure there’s always a new gem on the horizon. There are no better places to start looking and tasting than at these 10 jovial festivals, each with their own distinct character and traditions.

The 10th anniversary of Bruges’ popular beer festival is fast approaching, and the BAB (Bruges’ Autonomous Beer Tasters) is celebrating its first major milestone by taking 70 stalls out of its usual digs (the giant Beurshal) and planting them smack dab in the medieval city center. In this very special edition, half of the booths get a place underneath a huge tent set up at the Markt, and in a special twist, the other half will adorn the halls of the towering Belfry. Expect a great overview of Belgian beers and an international crowd making their Bruges’ getaway that much more gourmet. 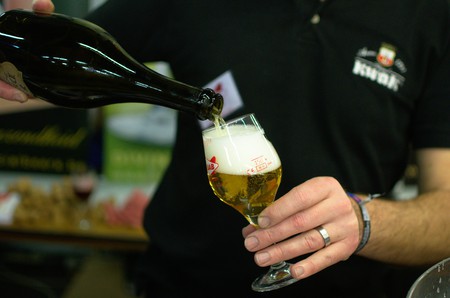 The Night of Great Thirst

The main asset of The Night of Great Thirst (besides its killer name) is its sole focus on Gueuze and Lambic beers – quintessentially Belgian brews that are made exclusively in the Senne Valley and the Pajottenland. Here, true traditional microbreweries produce them amidst the rolling hills and farmlands that have always provided for neighboring capital Brussels. Beer connoisseurs from far and wide are expected to show up at the eighth edition of the biennial festival, a night that promises to be particularly colourful as the organizing Gueuze Society is asking every visitor to bring his or her country’s flag. Starting at 7 pm, it’s one for all, and all for the Gueuze. 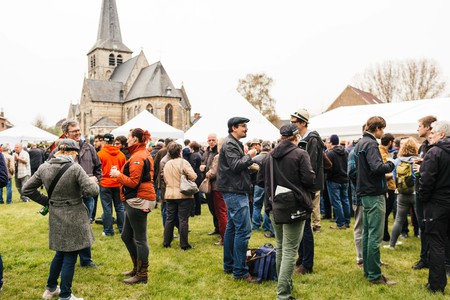 Kicking off the Night of Great Thirst | © Allagash Brewing / Flickr

This mammoth of a festival boasts a whopping 500 different beers and is making an increasingly distinctive mark on the European beer scene because of it. Beer enthusiasts have the fourth weekend of April penciled firmly into their calendars by now and tend to bring a pack of friends to get boisterous with as the day stretches on and the tasting glasses enjoy numerous refills.

Leuven’s Innovation Beer Festival has managed to combine the history and modernization of the brewing business for two years now. Hosted inside the traditional old brewing hall where Stella Artois, Leuven’s famed pilsner, first saw the light of day, the small-scale event offers up to 75 choices of specialty beers, all made by forward-thinking businesses intent on pushing the brewing sciences forwards. 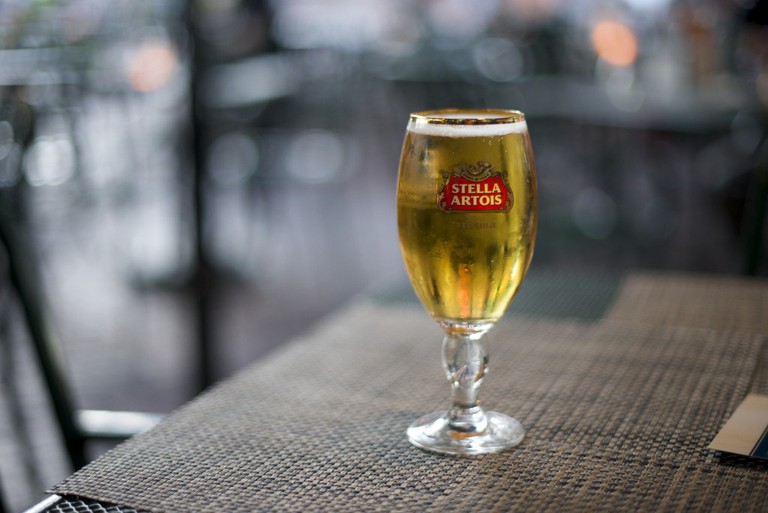 The Bollekesfeest, shows how the Antwerpenaars’ love for their ultimate regional beer has grown into a citywide culinary feast. The star of the proceedings: the Bolleke, hailed by its brewery De Koninck (part of our must-visit Belgian breweries list) as “Antwerp in a bottle.” A staple on Antwerp café menus, the Bolleke – a loose translation would be “chubby,” for the rotund form of its accompanying glass – has a slightly malty and hoppy aroma, with notes of caramel and cinnamon rounding out the flavour. During the festival, markets selling all sorts of other regional produce join the beloved brewski, and local bands perform throughout the four days. The whole thing is swimming in couleur locale. 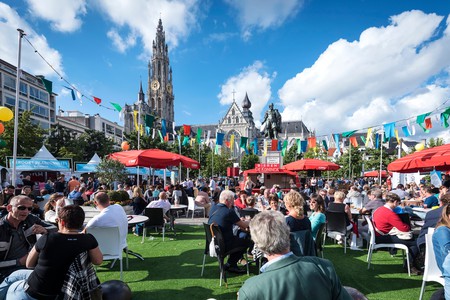 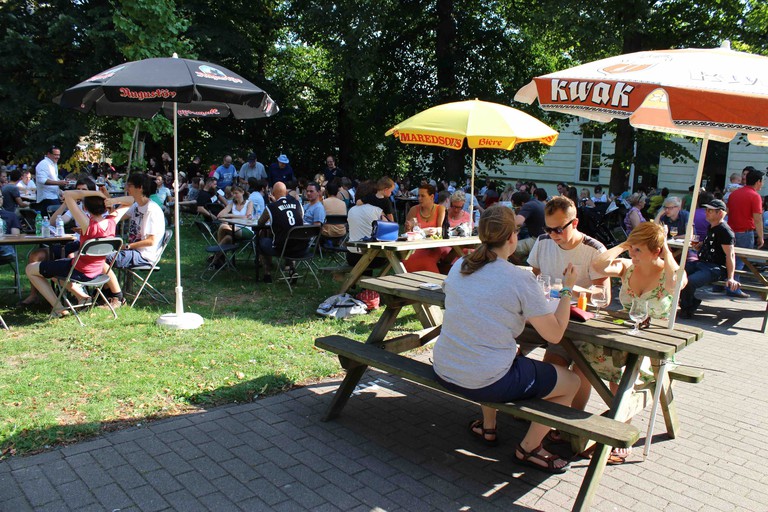 Ghent Beer Festival | Courtesy of Gentse Biervereniging
Brimming with East Flemish hospitality, the one-day Ghent Beer Festival regularly features a guest of honour. 2016’s edition served special UK brewskis in addition to the regular national and local beers, and a theme bar – 2016’s focus was “brettanomyces,” a so-called “wild yeast” typically used in Belgian beers from the Pajottenland – gives further meaning to the festivals “dare to taste” motto. All of the adventurous tastings happen in the relaxed environment of a city garden while meat sizzles on the communal barbecue. 2017 date: Saturday, August 19th from noon onwards
Open In Google Maps
Ghent, Belgium
Give us feedback

Summers at the Belgian coast become all the more refreshing during the last weekend of August when the North Sea Beer Festival lands in the center of Ostend. In the green Leopold Park, mere meters from the beach, 150 specialty beers and several incredible food stands lie in wait. String-lighted gazebos, live music sets, and beer cocktails (don’t knock ’em until you’ve tried ’em) make for especially cozy evenings. 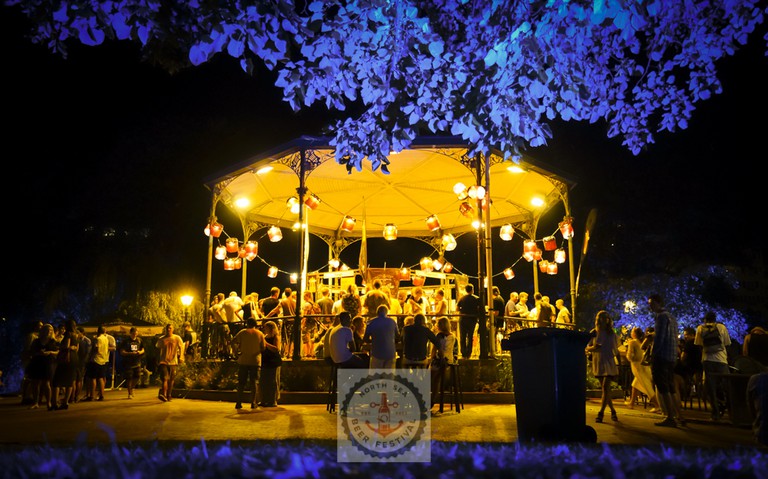 Before you dismiss following such summery beach vibes up with a beer festival in the country’s non-seaside capital, you have to consider Belgian Beer Weekend’s pedigree. Organised by the National Federation of Belgian Brewers, its backdrop is the gorgeous, UNESCO-labeled Grand Place; it serves about 350 Belgian beers, and 80,000 beer lovers from all over the world think it’s worth making the trip. The details are delightful too: you pay for your drinks in crown corks, and the local brass band parades around in historical outfits, blending in seamlessly with the iconic cobblestone square. 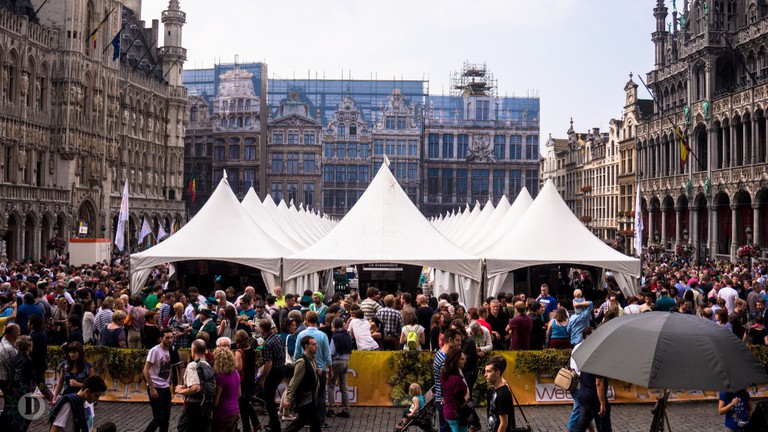 From the imposing and national to the quaint and regional, Durbuy, a charming Ardennes town fond of calling itself “the smallest city in the world,” hosts its Fête de la Bière every middle of September to great Burgundian enthusiasm. Prices can get up there due to Durbuy’s high tourist appeal – think turreted castles, artisanal jam factories, and topiary parks with Pamela Anderson-shaped shrubs – but the sampling trail, featuring regional beers, bread, and cheeses, offers up a Holy Trinity too delicious to resist.

The village of Poperinge – famed for its welcoming nature (much appreciated by the British Allied soldiers during the Great War, who came to call it “little Paris”) and for being the only hop-producing region in Belgium – is a natural fit for the popular Beer and Hop Festival. The Poperingenaars only organize their folky celebrations every three years, and 2017 is one of the lucky ones. If in Belgium, don’t miss the coronation of the Hop Queen, the chance to try an elusive Westvleteren 12 Trappist, and the Oktoberfest-style feast on long wooden benches.