On the northwest Belgian coast, there is a little known tradition: shrimp fishing on horseback. Visit any good seafood restaurant in the country, and you’re bound to see gray shrimp on the menu. In the town of Oostduinkerke, in Koksijde, a small group of souwester-clad fisherman take to the frigid sea on horseback. 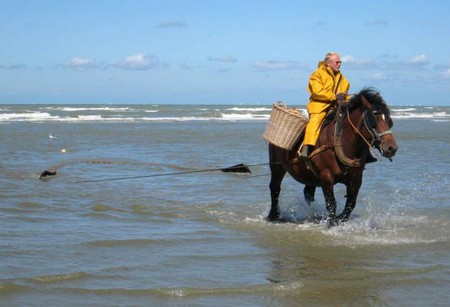 The activity consists of what its name describes: fishing shrimp on a horse. To do it, the fishermen drag the fishing nets behind them, picking up the shrimp from the sands while on horseback. The fishermen train Belgian draft horses, with an average weight of 1000kg, and use special materials to capture the shrimp. The tools used for the activity have evolved significantly over time in order to improve the fishermen’s comfort through clothing and materials, as well as to increase the quantity of fished shrimp by using Belgian draft horses instead of mules or smaller horses.

Shrimp fishing takes place an hour and a half before and after the low tide times. The fishermen fish in one hour timeframes and eventually go out of the sea for the horse to rest as well as to throw back unwanted fished species such as crabs and small fish, and to gather the caught shrimp in baskets on each side of the horse’s back. The activity is most productive during the warmer months (from April to October) which is also when the activity is open to the public; however fishermen can go at any time of the year as long as there is no ice cover. 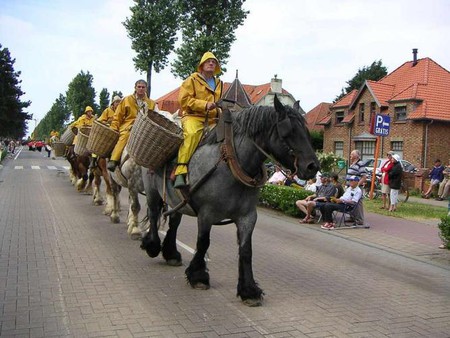 The reason for the lack of awareness of this tradition is mainly its near-extinction in recent centuries. In the 15th century, shrimp fishing on horseback was still practised on the North Sea coasts in France, the Netherlands and even the South of England. This activity represented an extra revenue needed for the household. Nowadays there is only one place in which it is still ongoing: Oostduinkerke, a sub-municipality of the municipality of Koksijde. The Oostduinkerke beach has the right characteristics to pursue this tradition, which on top of the fact that this beach is the Crangon crangon shrimp’s (commonly known as grey shrimp) natural habitat, it is also free of obstacles and has shallow waters.

Listed, since December 2013, on the UNESCO Representative List of the Intangible Cultural Heritage of Humanity because of the activity’s respect for the marine environment and the cultural heritage and promotion it provides to the local community among other reasons, shrimp fishing on horseback is currently only practiced by 15 fishermen who work as a community and are fully involved in keeping this tradition alive. 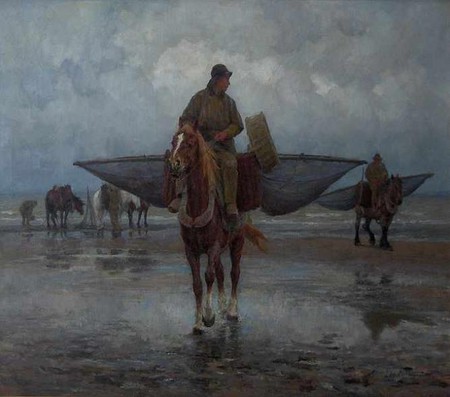 These 15 fishermen do it as a sideline activity, and therefore it does not constitute their main source of revenue. Their passion for the horses, fishing and sea is their main incentive. This passion to pursue this tradition is often transferred across generations but they also welcome new fishermen. Becoming a shrimp fisherman on horseback requires a theoretical course at the Oostduinkerke’s National Fisheries Museum, Navigo, given by the ‘Oostduinkerkse paardenvissers association’. Additionally, trainee fishermen must undergo two years of practical training and complete a final exam. Given the strength it requires, shrimp fishing was historically considered to be a man’s activity though women have practised it as well. In order for UNESCO to be able to add this activity to its heritage list, it needed to become more institutionalized. By passing the practical exam earlier this year, Nele Bekaert became the first woman to be officially recognized by the community as a shrimp fisherman on horseback.

In addition to the roles played by the fishing families and the local public administration, there are several local institutions and communities which act as the official bodies for this tradition. The Oostduinkerke’s Fisheries Museum, known as Navigo, constitutes the activity’s main office, as well as the official history and knowledge keeper. The organization Orde van de Paardevisser also plays a key role as it has the objective of documenting the tradition, organizing expositions, tastings and trips to meet other communities practising horseback fishing. 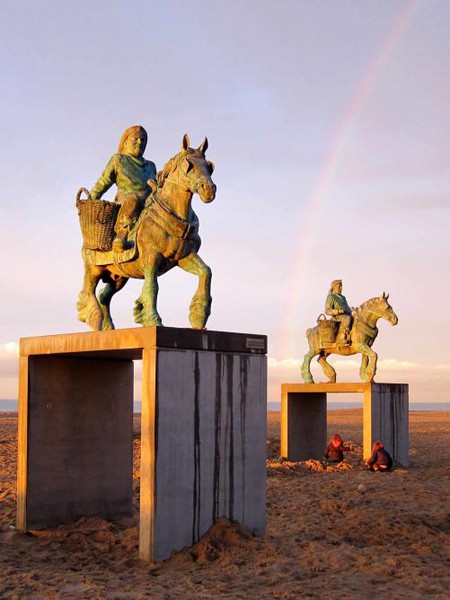 From a touristic point of view, this tradition represents one of the most promoted activities of the area. The municipality promotes this activity to the general public through a number of different activities.

Shrimp fishing is open to the public, particularly from April to October. On specific dates, the fishing is followed by a shrimp cooking masterclass on site and a tasting.

Since 1950, the official Shrimp Festival takes place yearly in Oostduinkerke across two days at the end of June, when on top of the usual summer activities, there are a number of concerts, a local market, a swimming pool and a dedicated parade. The festivity starts to be prepared months in advance and attracts over 10,000 visitors coming from across the globe.