The 7 Most Beautiful Contemporary Buildings In Brussels

The French Speaking Parlament | ©Georges De Kinder/Courtesy of SKOPE
Brussels is a city with an impressive number of diverse architectural buildings that span from stunning examples of Art Nouveau to more contemporary Modernist projects with organic shapes and environmentally conscious designs. Check out Culture Trip’s guide to seven incredible contemporary buildings in Brussels.

Building
Le Toison d'Or/ | ©Hufton+Crow/Courtesy of UN Studio
Nestled between two historic gates, Porte de Namur and Place Louise, Le Toison d’Or is a contemporary reinterpretation of the Art Nouveau Style that stands out and creates a sophisticated atmosphere in Brussels. Devised as a hybridization of a traditional building block typology and a mixed use development with podium, it simultaneously merges a retail and residential program. The design is elegant with a unique facade — visually fragmented through variations in texture, depth and rhythm, and organic forms of the V-shaped portals which represent the link between the lower retail levels and the residential levels above. It has also been developed with high standards of sustainability — thermic isolation for the facade, and a high standard of acoustic insulation for both the apartments and the retail units.
Architects: UNStudion in collaboration with Jasper-Eyers Architects
More Info
Open In Google Maps
Brussels, Belgium
View menu
Visit website
Visit Facebook page
Send an Email
Give us feedback

Building
Situated in the European Quarter, the Black Pearl is a complex of about 11,000 m² that meets the highest architectural, technical and environmental requirements. The design of the building is simple and clear, with smooth concrete facings and lavish glazed drape walls outlined with steel details. It has underground parking with a terminal to recharge electric cars and a central garden that is a bit of a green oasis. In 2012, the Brussels Institute for the Environment (BIM) awarded it with the ‘Exemplary Building’ label.
Architects: ART&BUILD
More Info
Open In Google Maps
Brussels, Belgium
View menu
Visit website
Visit Facebook page
Send an Email
Give us feedback

Building
Leopold Village | © JL DERU and Courtesy of Pierre Blondel Architectes
Located just a few strides from the beautiful Leopold Park, Leopold Village is a true multi-functional architectural landmark of the European Quarter. The complex has three residential blocks with luxury units — studios, apartments and penthouses, a four star hotel, underground parking, and on the ground and first floor there are commercial spaces, restaurants and shops. The design is lofty and dynamic with several unique facades, big windows and an interesting volume play with a hint of 50s and 60s aesthetics.
Architects:Pierre Blondel Architectes
More Info
Open In Google Maps
Brussels, Belgium
View menu
Visit website
Visit Facebook page
Send an Email
Give us feedback

Building
The French Speaking Parliament | ©Georges De Kinder and Courtesy of SKOPE
The French-speaking Parliament represents the combination of the past and present, history and modernity. The project is a construction of a new building and restoration of a building that has heritage value. This is a clean, functional and eco-friendly building with a simple and bright form. The most striking part is the facade which adds an aesthetic richness to the building. It’s envisaged by a ‘voronoïdes’ pattern — a mathematical formula based on five distinct elements that combines infinite mathematical variations to create a remarkable aesthetic.
Architects:SKOPE
More Info
Open In Google Maps
77 Rue du Lombard, Bruxelles, Bruxelles, 1000, Belgium
+3225049621
View menu
Visit website
Visit Facebook page
Send an Email
Give us feedback

Library
Savonnerie Heymans is a social housing project with the aim to create a sustainable community. The complex is built on the site of a former soap factory and it offers 42 different types of accommodations including studios, apartments, lofts, duplexes and maisonettes (small houses). It also provides a space for social meetings and events, a public game library ’Ludothèque,’ gardens and playgrounds. Glass-enclosed bio climatic loggias, solar power, rainwater harvesting for toilets, maintenance and gardens, natural materials for insulation and much more all merged to make this project an inspiring place to live. The creator used the existing historical buildings and elements such as the chimney, the main 19th century house and the postal relay and integrated them into the complex (the old chimney was used as part of the underground garage ventilation system).
Architects:MDW Architecture
More Info
Open In Google Maps
Brussels, Belgium
View menu
Visit website
Visit Facebook page
Send an Email
Give us feedback

Square Brussels Meeting Centre is an alluring technological gem in the heart of the Quartier des Arts that gives a newfound visibility to the former ‘Palais des Congrès’. It represents a poetic emblem incarnate in the 16-metre tall glass cube that forms the principal entry to the premises. The design is transparent and light; it’s bold and modern but at the same time it appears to blend into the surrounding architectural landscape. It offers 27 meeting rooms, an exposition zone, restaurant, and a brasserie. The foyer of the meeting center is decorated with prestigious works of art which create an ambiance specific to the site — a mix of history and future. 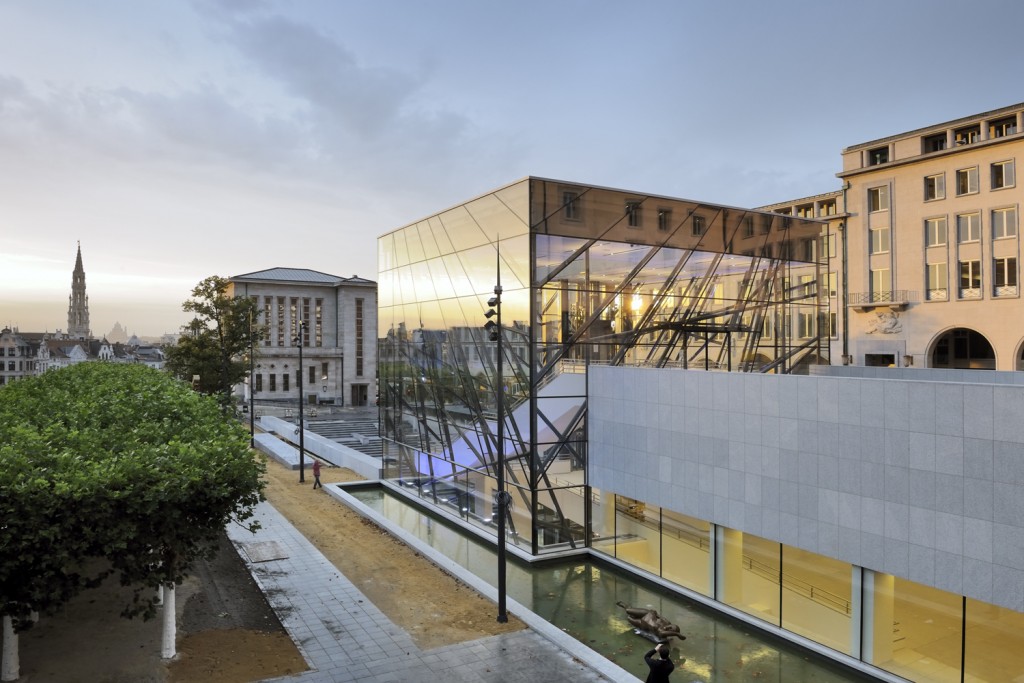