The 11 Most Impressive Buildings in Ghent 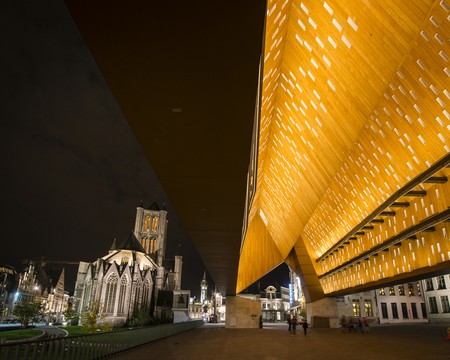 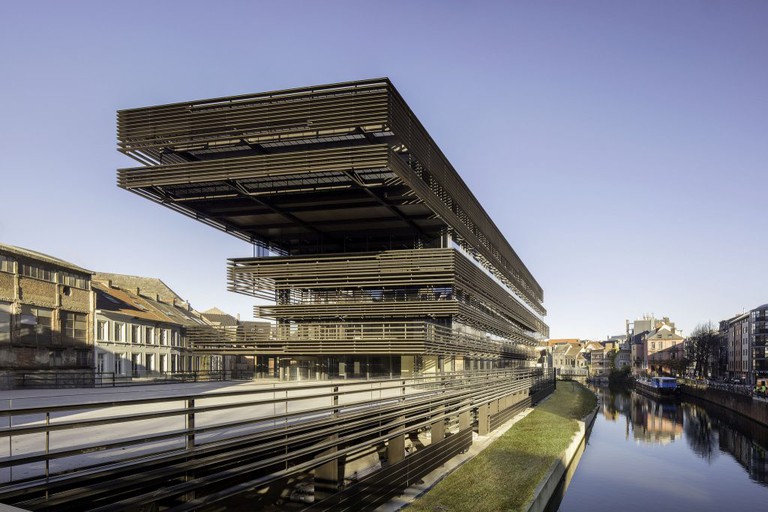 De Krook | © Karen Borghouts / Courtesy of Visit Ghent
Ghent’s newest landmark has aimed to turn a municipal library into a city within a city. The wood-panelled giant that replaced an area formerly known as ‘the armpit of the Scheldt’ boasts six stories, built-in squares and walking bridges, and hardly any doors. It’s a public building that Ghent firm Coussée & Goris and Spanish partner RCR Arquitectes designed to, despite its significant size, feel light, airy, and open, primed for connection. Reading is encouraged not only in the library itself but also in the wide Krook café and even on a specially designed, uneven staircase. Bending along with a curve in the river as it does, the construction suggests a flexibility that persists inside; the city’s university, a technology company known as imec and a local radio station have also all found a home inside this multifunctional mammoth.
Open In Google Maps
1 Miriam Makebaplein, Gent, Vlaanderen, 9000, Belgium
+3293236800
Visit Website
Give us feedback 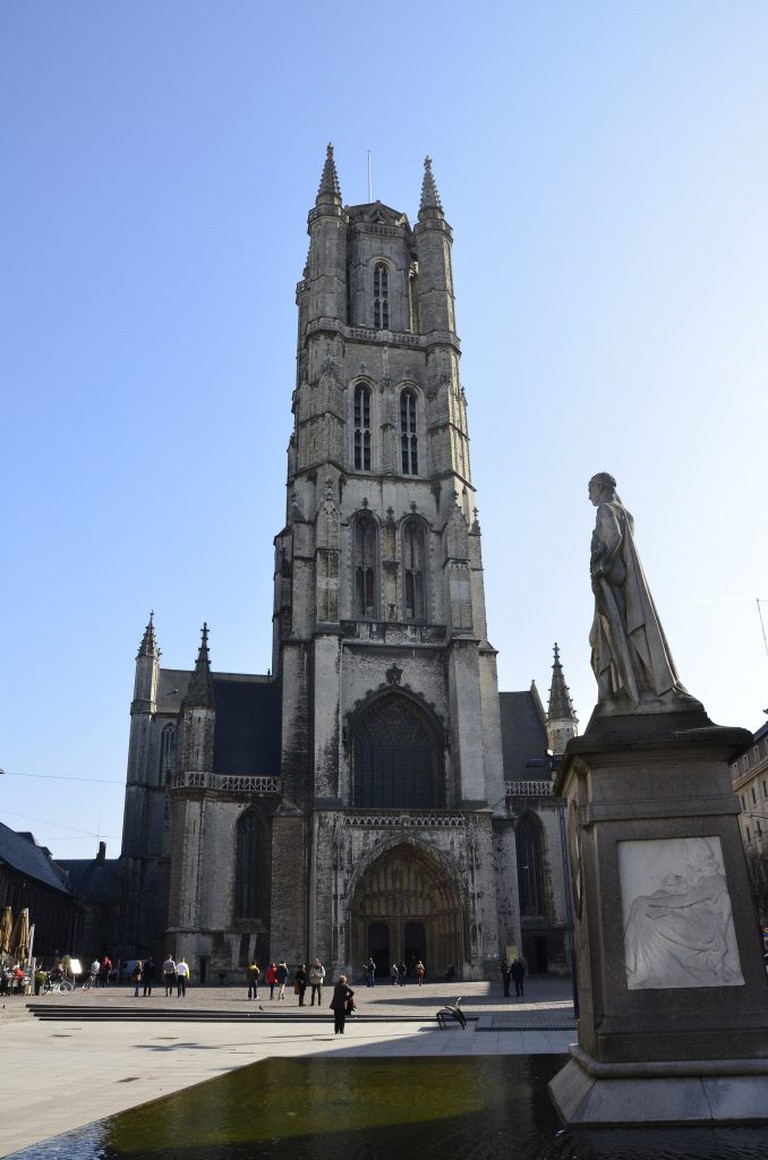 St Bavo's Cathedral | Courtesy of Visit Ghent
Perhaps best known as the home to the most coveted artwork of all time – much-nicked Renaissance masterpiece The Adoration of the Mystic Lamb – St Bavo’s Cathedral has evolved into somewhat of a temple of the religious arts. To the architecturally inclined, however, the backdrop to precious altarpieces by Pieter Paul Rubens and the Van Eyck brothers is equally stunning. The majestic and mainly Gothic church was worked on for over 500 years, and it features an eclectic architectural mix of star-shaped vaults and octagonal towers.
Open In Google Maps
Sint-Baafsplein, Gent, Vlaanderen, 9000, Belgium
+3292692045
Visit Website
Give us feedback

Castle of the Counts

An attention-grabbing piece of the Middle Ages smack dab in the city centre, the massive Gravensteen (‘Castle of the Counts’) boasts battlements, turrets, winding staircases of stone and even an intact moat. The stronghold used to be a significant seat of power for the Brabant counts, a fact emphasised by the suits of armour in the halls and the intact torture chambers below. 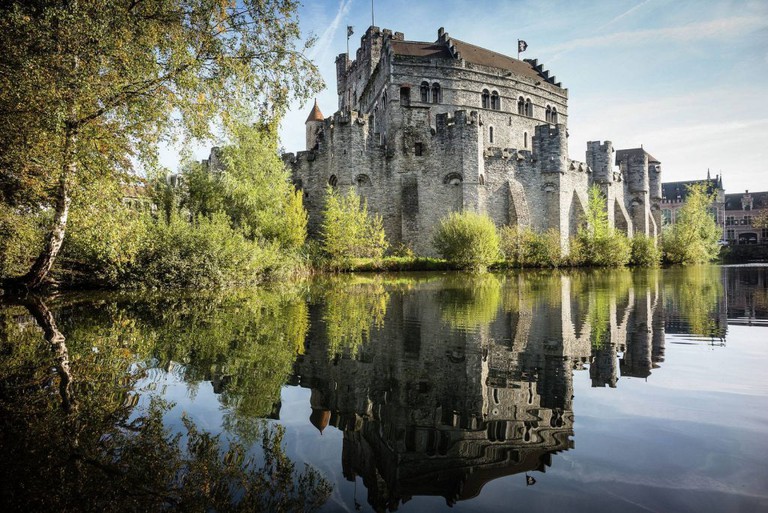 Castle of the Counts | Courtesy of Visit Ghent 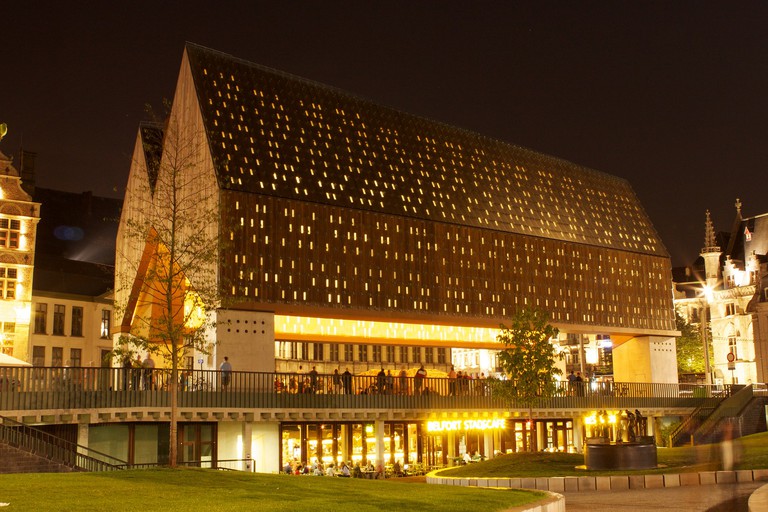 Ghent City Pavilion | © Thomas Vlerick / Flickr
Standing on firm concrete legs, one of them harbouring a fireplace so that smoke can crinkle up a crooked chimney, the asymmetrical City Pavilion dominates a central square in the historic core. Initially, critics derided the design by Robbrecht en Daem and Marie-José Van Hee as looking like a ‘sheep shed’, and UNESCO even sent a letter to express their disappointment in not being consulted before such a dramatic change in the historic landscape was executed. However, most Gentenaars have come to like the idiosyncratic venue by now, as its wooden canopy and the light filtered in through hundreds of small windows provides a warm environment and excellent shelter from sudden bouts of rain.
Open In Google Maps
Poeljemarkt, Gent, Vlaanderen, 9000, Belgium
+3293236399
Visit Website
Give us feedback 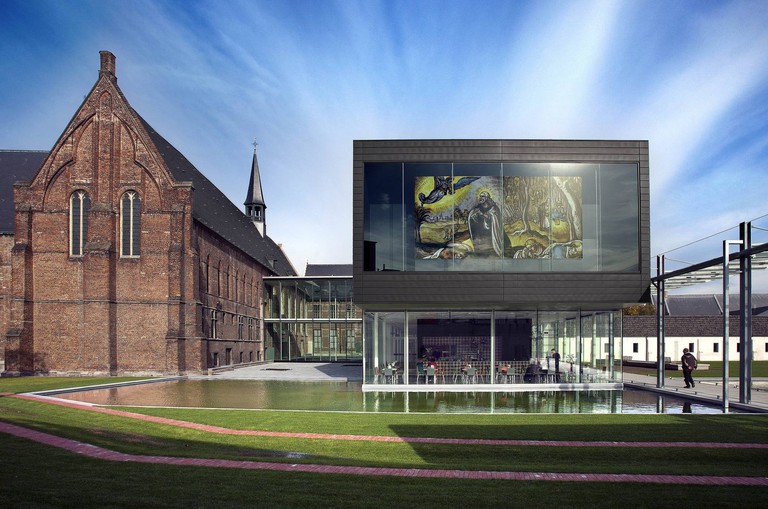 STAM | Courtesy of Visit Ghent
Linking Ghent’s past to its present, Koen Van Nieuwenhuyse renovated the STAM City Museum in 2010 to combine three eras worth of architecture: a 14th-century abbey, a 17th-century convent, and a modern 21st-century add-on with black marble floors and lots of glass. The first room is particularly absorbing as it boasts an aerial map of Ghent that covers the entire floor. It’s not uncommon to see people crawling around on all fours trying to make out landmarks or their homes.
Open In Google Maps
2 Godshuizenlaan, Gent, Vlaanderen, 9000, Belgium
+3292671400
Visit Website
Give us feedback

At De Vooruit, the socialist spirit is everywhere. This grand 1913 socialist palace on the Leie River used to house a cinema, a party hall, a restaurant, a café and more for the Ghent everyman. After a century and period of decrepitude after World War II, De Vooruit still breathes the same atmosphere of inclusion through culture thanks to movie showings, concerts, readings and more, and its spacious renovated café has again become a favoured hangout in which locals like to unwind. That’s if the sun isn’t out and everyone isn’t lounging on the newly minted roof terrace by DIAL architects, who cleverly added a floating vertical garden above. 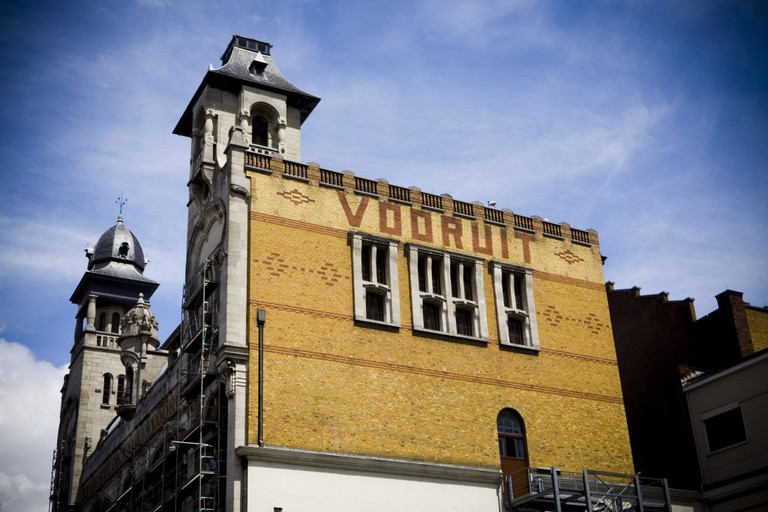 Victor Horta was actually born in Ghent before he turned Brussels into his architectural playground, but it wasn’t the godfather of Art Nouveau that gave Ghent its most prominent townhouses in that style. That would be Achilles Van Hoecke-Dessel, who plopped a number of them down on the Kunstlaan and the Kattenberg, most notably number 41 on the former. Hoecke-Dessel designed this 1903 creation for himself, complete with a grand – and yes, hobbit-reminiscent – front door and detailed cast-iron balcony. 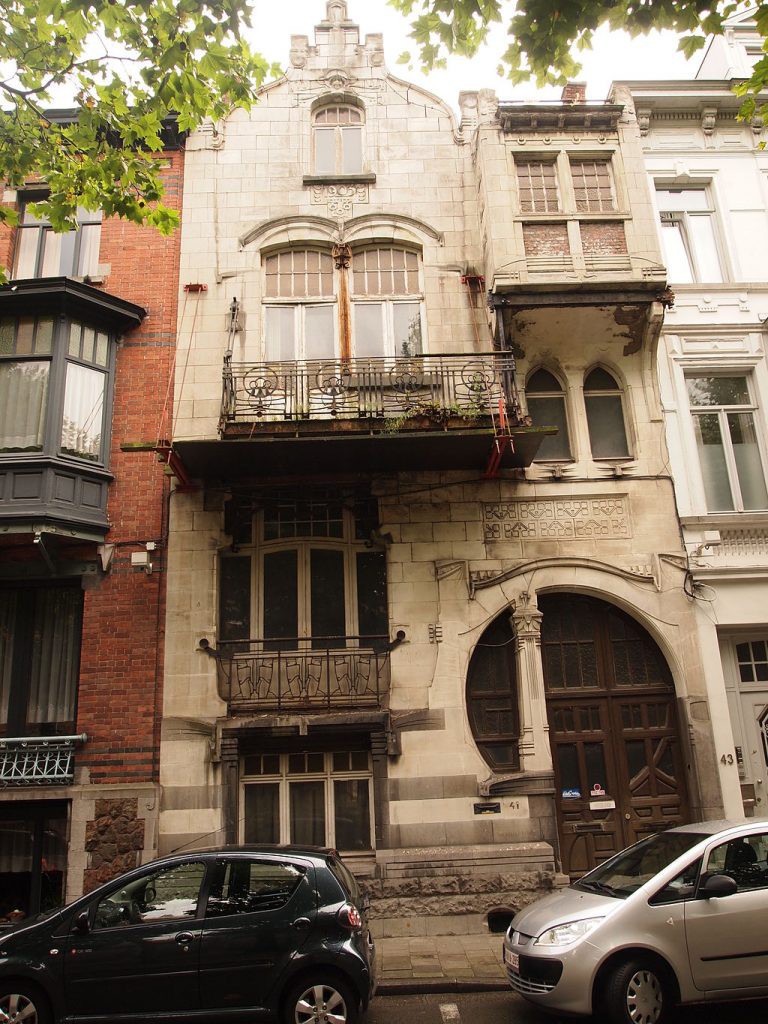 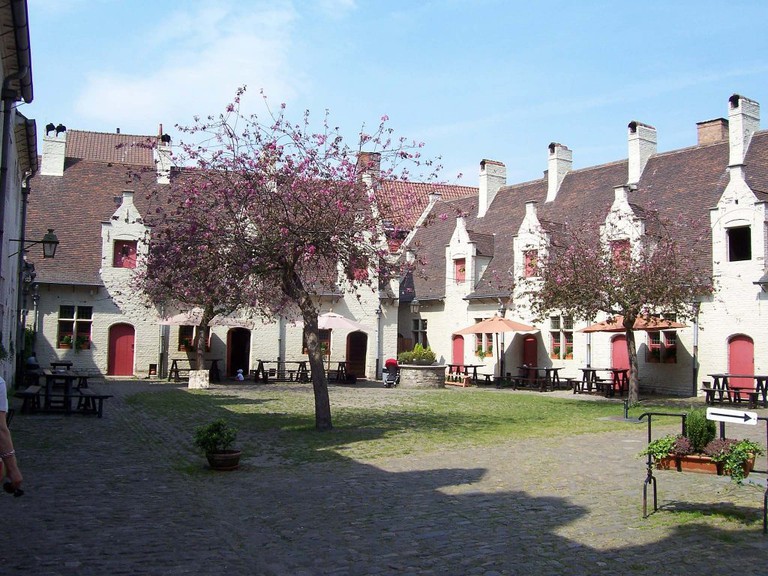 House of Alijn | Courtesy of Visit Ghent
This former 14th-century almshouse on the waterfront, founded as a peace offering after a bloody vendetta between two prominent Ghent families, is a real charmer. It’s not just the separate little houses (eight facing the street and 16 more in the courtyard) that bring on the nostalgia. All the quaint rooms are part of ‘Het Huis van Alijn’, an alternative city museum that explores what daily life in Ghent was like in the 20th century through decades-old snapshots, home videos, toys and so on. A traditional puppet theatre still performs sometimes, and an authentic Flemish café with an idyllic patio serves Belgian beers and snacks from the days of yore.
Open In Google Maps
65 Kraanlei, Gent, Vlaanderen, 9000, Belgium
+3292353800
Visit Website
Give us feedback

Functioning as an advert for the trade, Ghent’s Bricklayer’s Guild House is a famously lovely sight, which is also why there are two of them: a copy located at Graslei number 8 and the original at Sint-Niklaasstraat 2. Since people thought the 16th-century original was lost, the city installed a copy to spruce up the city’s yesteryear glory for the 1913 World Fair. In 1976, however, the Gothic Guild Hall, built by actual mason hands, was discovered behind a couple of nondescript walls during renovation works across the street from St Nicholas’ Church. Six dancing figures, which swirl with the wind, now stand on the original’s top. 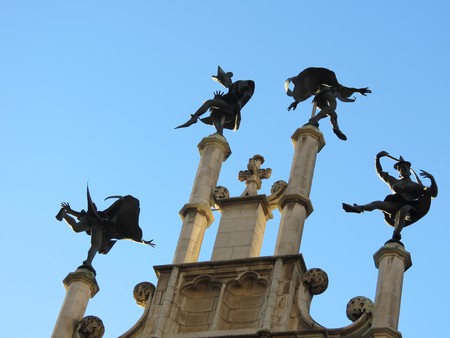 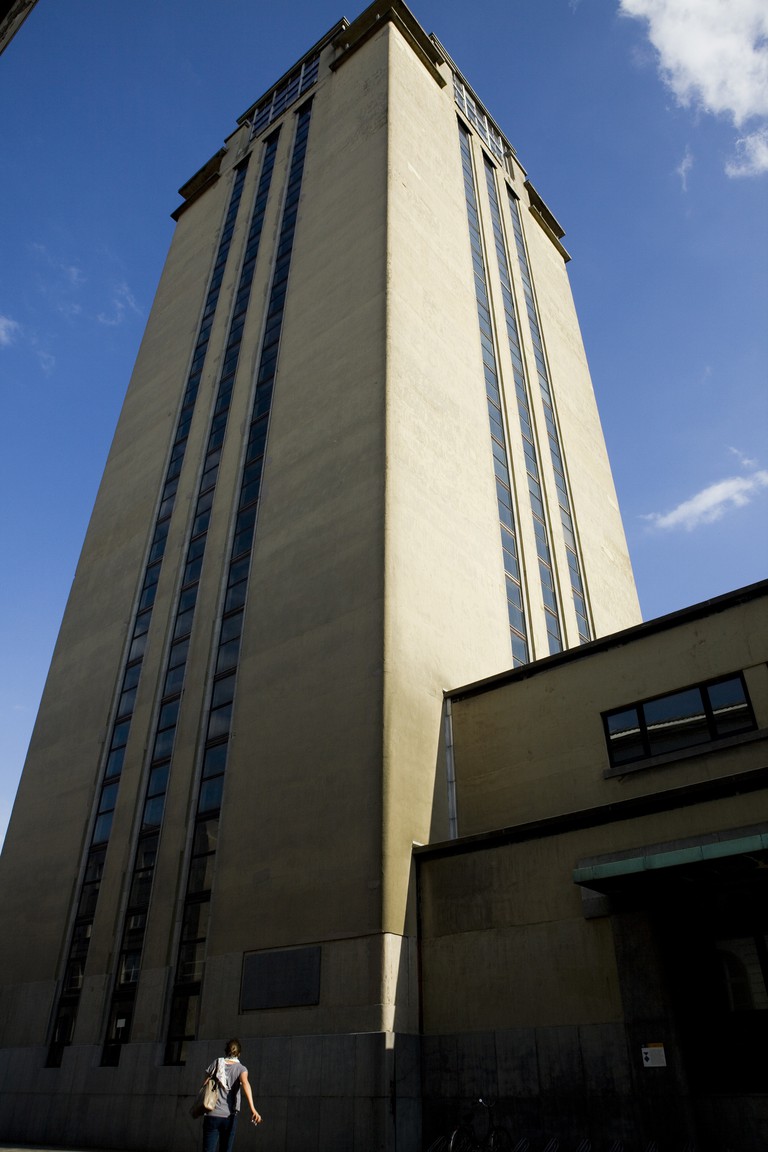 Book Tower | Courtesy of Visit Ghent
Considered both ugly and a masterpiece of modernist architecture at the same time, Henry Van de Velde’s Book Tower in the student quarter is one of Ghent’s most divisive landmarks. The slender concrete giant with parallel strips of vertical windows forms a stark contrast to the city’s famed trio of medieval towers (St Nicholas Church, St Bavo’s Cathedral and the Belfort). Once inside among the white marble and other lux materials typical of the Art Deco style, initial dislike of the building is often swayed.
Open In Google Maps
9 Rozier, Gent, Vlaanderen, 9000, Belgium
Visit Website
Give us feedback 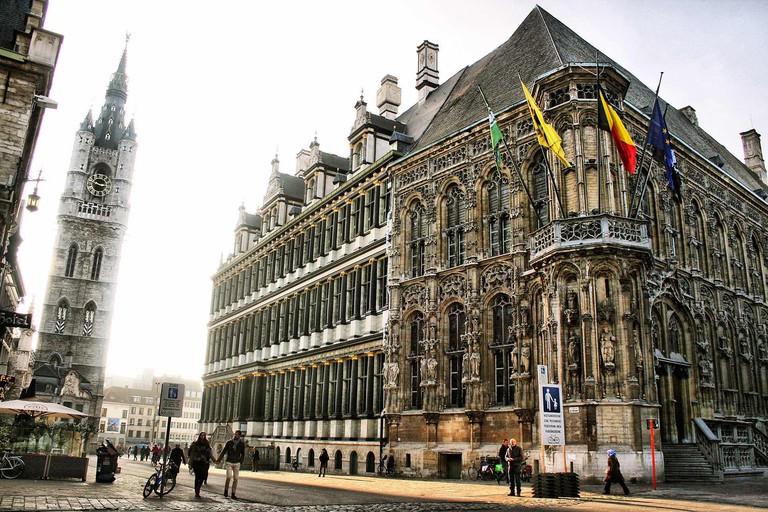 Ghent City Hall | © Adufilms / Pixabay
Ghent’s City Hall has lush Gothic detail on one side and all the markings of an Italian Renaissance palazzo on the other; the discrepancy between both wings is a result of the building time falling right during the transition of styles. It’s an immensely popular wedding venue thanks to its Wedding Chapel with gorgeous stained-glass windows. Quirky detail: when the city discovered that people from the medieval days marked a rain pipe by painting a swirl pattern of white and blue (blue and white stand for the water being carried from the sky to the ground) on it, the city did the same to the pipe on the City Hall.
Open In Google Maps
1 Botermarkt, Gent, Vlaanderen, 9000, Belgium
+3292101010
Visit Website
Give us feedback
Give us feedback