11 Most Beautiful Paintings By Pieter Bruegel The Elder 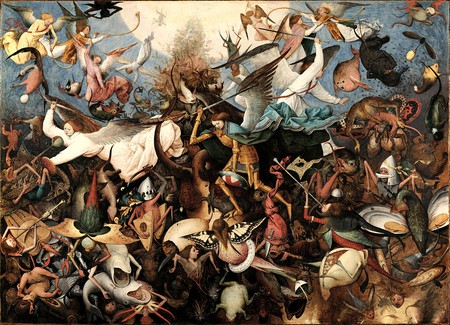 Pieter Bruegel the Elder (c. 1525–1569) was a Netherlandish Renaissance painter who, originally from Brabant, resided in Brussels during the last six years of his life. His reputation as one of the greatest of all Netherlandish Renaissance painters is justified as his paintings give an insight into man’s relationship to nature. His artworks have inspired many, including the renowned painter Peter Rubens, as well as many Flemish painters in the following 17th century. Here are the 11 most stunning paintings depicting Bruegel’s intricate style.

Landscape with the Fall of Icarus (1558)

As the mythological tale goes, Icarus and his father Daedalus planned to flee Crete, and in order to escape, they formulated a plan that involved constructing homemade wings out of feathers and wax. Yet Daedalus warns Icarus that the wings he created are not durable if he flies too close to the sun. Ignoring his father’s words, Icarus does, indeed, end up in danger as his wings quickly begin to melt away, sending him plummeting into the sea below.

Bruegel’s piece the Fall of Icarus captures the exact climax of this story aesthetically, as viewers can see a pair of legs poking out from the sea on the foreground of the painting. Yet, while the tale does reference this as a tragic event, the subjects in Bruegel’s painting appear to be passive rather than entranced, as they continue on with their daily routines, alluding to a metaphorical connection about how humans may perceive tragic events.

Over the years, the Fall of Icarus has been contested by art critics as to whether it is truly an original work by Bruegel, or a copy. Though numerous tests have led to mixed results, what can be inferred is that due to the the painting being transferred from panel to canvas, the process left the current work damaged. Whether it be an original work of Bruegel’s or not remains a mystery for the art historians and critics, yet the rest of the world will continue to marvel at this masterful painting at the Royal Museums of Fine Arts in Brussels. 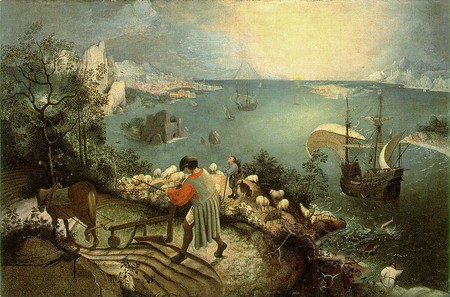 Pieter Bruegel the Elder - The Fall of Icarus | WikiCommons

The Triumph Of Death depicts a battle-stricken landscape, showcasing Bruegel’s incredibly complex style. Spend some time looking at it to really comprehend the symbolism behind it. Have you noticed that one of the two armies fighting against each other is composed entirely out of skeletons? The painting itself also features objects and activities that are intended to depict daily life in the 16th century, but an odd twist of fate has this otherwise tranquil landscape become a scene of chaos as skeletons seem to takeover the village. You can admire this artwork in the Museo del Prado in Madrid, where it has been since 1827. 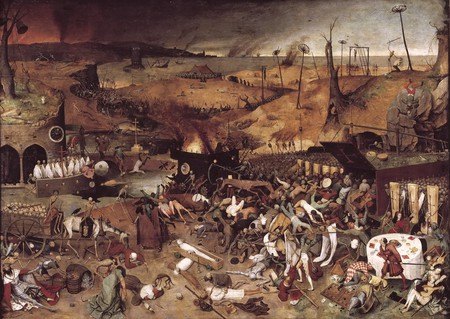 The Triumph of Death by Pieter Bruegel | © Wikimedia Commons

Bruegel painted three different paintings of the Tower of Babel – an etiological myth in the Old Testament. While one of the three paintings is lost, the remaining two represent some of Bruegel’s finest work. This version depicted below is the most famous, and for good reason.

The painting showcases a large tower that is intended to mirror the Roman Colosseum, and serves to represent the biblical Tower of Babel – an architectural masterpiece described as a symbol representing the unification of mankind and their commitment to the Church and its religious doctrine. Yet as exhibited in Bruegel’s painting, upon closer speculation, it can be seen that this ideal passage from the Bible can be slightly askew, as Bruegel hopes to convey through his faulty tower. Of course, this was no mistake, as during the time this painting was created, the Church was, in fact, dealing with a schism between the Catholic and Protestant theologies, a dynamic that was ultimately visible between the home of Catholicism (Rome) and the Lutheran-Protestant religion arising in the Netherlands.

The painting, which is currently displayed at the Kunsthistorisches Museum in Vienna, is worth a visit to not only catch a glimpse of Bruegel’s artistic mastery but also an opportunity to consider the varied meanings behind this particular work. 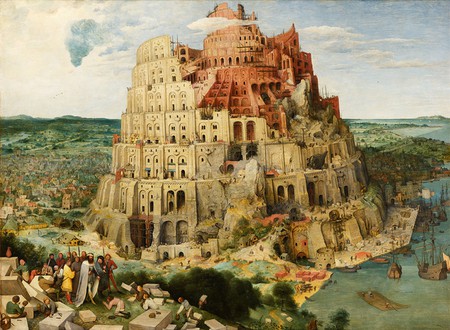 The Tower of Babel by Pieter Bruegel | © Wikimedia Commons

The beauty in this painting lies in its harmony and use of white and different shades of beige, which are calm colors. Even though it has not been confirmed by any art historians, viewers can assume that this piece depicts a scene in 1565’s Brussels, as Bruegel was living in the beautiful city by that time. This piece of art is currently located at the Musées Royaux des Beaux-Arts in Brussels. 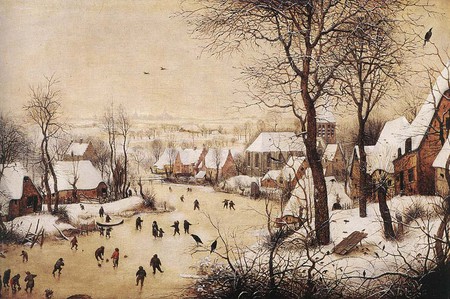 As is the case with quite a few of Bruegel’s paintings, this intricate one is also inspired by religion and is based on theme of virtues and sin, a subject that Bruegel would continue to use throughout his career. Now displayed at the Musées Royaux des Beaux-Arts in Brussels, The Fall of Rebel Angels depicts a passage from The Book of Revelation illustrating rebel angels being chased out of Heaven by the archangel Michael. The chaos of this scene is also accentuated through the misshapen details of the sinners, illuminating Bruegel’s inspiration for this work may have been connected to another Dutch artist at the time, Hieronymus Bosch. Similar to Bruegel, Bosch often used religion as his source for his work, yet established his work from the rest due to his intricate and often outlandish depictions of hell, a concept that resonates within Bruegel’s characters as well.

Landscape with the Flight Into Egypt (1563)

Landscape with the Flight Into Egypt manages to depict Bruegel’s deep insight into the beauty of nature – it is by far one of his most alluring landscape paintings. The numerous shades of blue and green complement each other quite exquisitely and really captivate the viewer. Further, it also contains a theological premise at its center, as it features Saint Joseph, the Virgin Mary and Jesus fleeing Bethlehem. This particular work was created for Cardinal Perronot de Granvelle, a generous benefactor of Bruegel’s work, and is currently on display at the Courtauld Gallery in London. 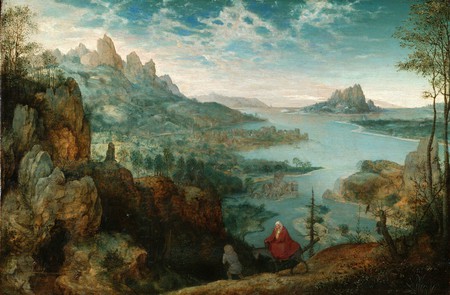 Landscape with the Flight Into Egypt by Pieter Bruegel | © Wikimedia Commons

The landscape in this masterpiece – as with other works by Bruegel – is quite stunning. Apart from the people whose faces slightly deviate from realistic ones, this painting might as well be a photograph. As part of a six-piece collection, The Harvesters was commissioned by Niclaes Jongelinck and is a prime example of early Dutch painting. Today, it is exhibited at the Metropolitan Museum of Art in New York City. 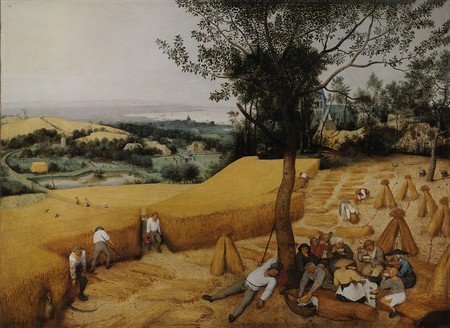 The Suicide of Saul is another painting by Bruegel portraying a subject taken from the Bible, but one that he treats as a contemporary event, as he portrays the soldiers in armor that was common in the 16th century. Drawing inspiration from the biblical passage about the story of Saul, the tale describes how Saul committed suicide before encountering the Philistines – an act Bruegel chooses to define as shallow and indicative of Saul’s desire to preserve his honor. The captivating part about this painting is the technical detail with which the soldiers are drawn and incorporated in the vast landscape shown. This piece of art is located at the Kunsthistorisches Museum of Vienna, Austria. 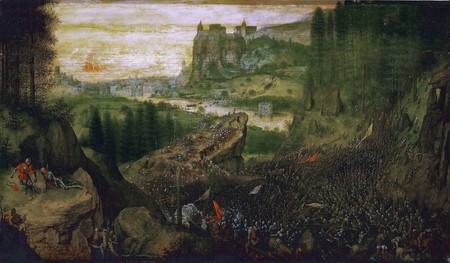 The Suicide of Saul by Pieter Bruegel | © Wikimedia Commons

This particular painting has a peculiar beauty because on the right hand side of the painting, the colors used are cold and mostly blue. However, moving toward the left hand side of the painting, the warmer the colors become. The contrast portrayed is very much captivating and reveals that Bruegel’s inspiration for this landscape painting could be a reflection from his travels. River Landscape with a Sower is based on a parable from the Gospel by Matthew, Mark and Luke. The viewer can see from the painting that the landscape where the farmer already trekked through is lush with green, while some of the other areas remain rocky and desolate, foreshadowing the deeper meaning behind this parable. This painting is now on display at the Timken Museum of Art in San Diego, California. 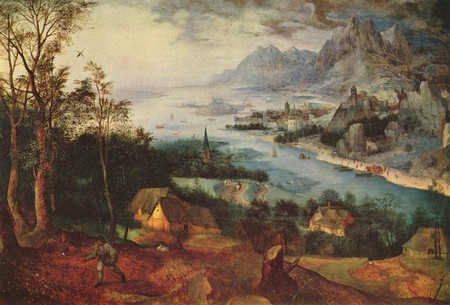 River Landscape with a Sower by Pieter Bruegel | © Wikimedia Commons

The title does this painting justice as this piece of art features a generally dominant gloomy green tint, making the sad atmosphere obvious to the viewer. As with many of Bruegel’s paintings, the beauty of this work is its ability to transmit certain feelings to its admirers. This painting, like quite a few of Bruegel’s other artworks, is displayed at the Kunsthistorisches Museum in Vienna, Austria. 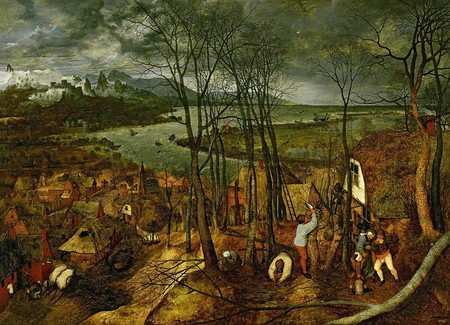 To close off, the last painting’s beauty is a slightly morbid one – the title suggests that the subject of the painting is the magpie bird. However, upon viewing the actual painting, even though the magpie is in the middle of the painting, viewers will also notice that there is an actual beheading coming up at the gallows on which the magpie is perched. As one of Bruegel’s last works before his death, this painting is thought to contain sentiments that echo the religious divide in Christianity and the role of Protestantism in the Netherlands. This piece of art is located at the Hessisches Landesmuseum in Darmstadt, Germany. 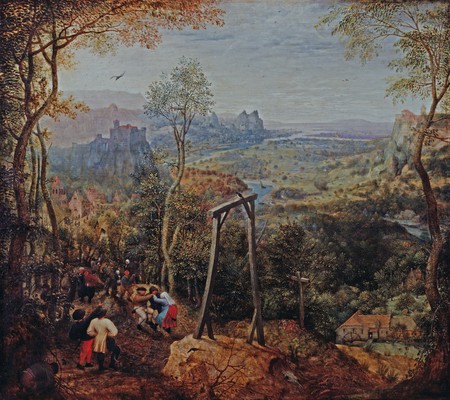 The Magpie on the Gallows by Pieter Bruegel | © Wikimedia Commons