The 10 Most Beautiful Churches In Belgium

Basilica of the Holy Blood in Bruges | © Szilas/WikiCommons
Beginning in the 7th century, Christian abbeys and churches started to appear in the Low Countries – and their numbers only continued to grow throughout the years. Belgium now boasts an impressive repertoire of churches and religious buildings (even the tiniest of villages has its own church), some of which are internationally known for their architectural mastery. Culture Trip brings you ten of the most dazzling churches in Belgium.
Cathedral of Our Lady in Antwerp © Tatiana Vdb/Flickr

Cathedral of Our Lady, Antwerp

Cathedral
Basilica of the Holy Blood in Bruges | © Jim Linwood/WikiCommons
The Onze-Lieve-Vrouwekathedraal, or the Cathedral of Our Lady, is a stunning example of Brabantine Gothic architecture, and its belfry tower is part of the UNESCO World Heritage List. Points of interest include its bundled pillars, the western tympanum depicting the Last Ordeal, and four paintings by Peter Paul Rubens which can be viewed inside the cathedral.

Basilica of the Holy Blood, Bruges

The small Basilica of the Holy Blood is a real showstopper in Bruges. Originally the private chapel to the Count of Flanders, the Basilica houses a relic allegedly containing the blood of Christ. The Neo-Gothic interior, with its stained glass windows and colorful murals, are absolutely beautiful. 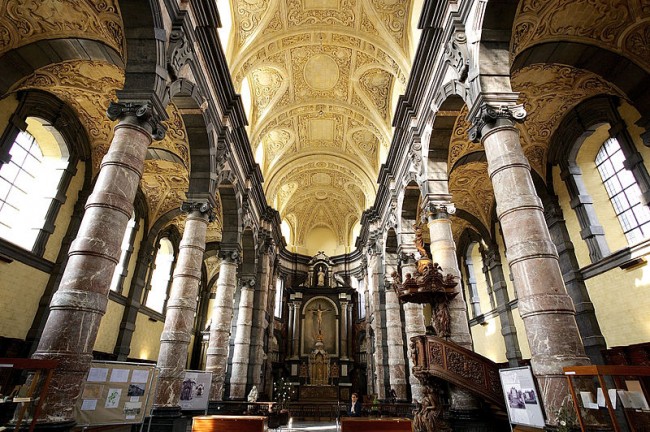 Cathedral, Church
St. Bavo's Cathedral in Ghent | © Simonly/WikiCommons
Located in Namur, the Eglise Saint Loup is one of the most important Baroque churches in Belgium. With its distinctive black and pale red marble pillars, it made quite the impression on French poet Charles Baudelaire, who described it as ‘un terrible et délicieux catafalque’ (a formidable and delicious coffin) and collapsed upon exiting the church (brought on by his having contracted syphilis).

Cathedral, Church
Cathedral of St. Michael and St. Gudula in Brussels | © Donaldytong/WikiCommons
Originally a wooden chapel, the Cathedral of Saint Bavo was expanded in the Romanesque style in the 11th century, and subsequently expanded in the Gothic style throughout the 14th and 16th centuries. Points of interest include the imposing Baroque high altar, as well as the ‘Adoration of the Mystic Lamb’ by Hubert and Jan Van Eyck, which can be viewed inside a separate chapel for 4€.

Cathedral
The inside of the St Michael and St Gudula chapel features stained glass windows that date back to 1540 and a huge organ containing 4,300 pipes | © JOHN KELLERMAN / Alamy Stock Photo
Book Now
Having taken around 300 years to build, the Cathedral of St. Michael and St. Gudula is actually a co-cathedral with St. Rumbold’s Cathedral in Mechelen. The architecture is a mix of French Gothic and Brabantine Gothic; the altar is Baroque. Due to its importance and its location in the capital, it is often used for important Catholic ceremonies such as royal marriages and state funerals.

Cathedral of Our Lady, Tournai

Cathedral, Church
Collegiate Church of St. Gertrude in Nivelles | © Marc Ryckaert/WikiCommons
With its distinctive transept characterized by a cluster of five bell towers and semi-circular ends, the Cathedral of Our Lady in Tournai is another UNESCO World Heritage site. It is one of the biggest churches in Belgium and an important forerunner of the Romanesque architectural style. You can also admire one of Peter Paul Rubens’s paintings in the church, and the reliquary box or châsse of Our Lady is considered one of the seven wonders of Belgium.

Cathedral, Church
Constructed in the Ottonian style around 992, the Collegiate Church of St. Gertrude in Nivelles is an imposing construction that puts you in mind of a castle. The western avant-corpsin particular distinguishes the church because of its height and Romanesque, octagonal bell tower.
More Info
Open In Google Maps
Nivelles, Wallonia, 1400, Belgium
+3267212069
View menu
Visit website
Visit Facebook page
Send an Email
Give us feedback

Cathedral, Church, School
Our Blessed Lady of the Sablon Church in Brussels | © Linda/Flickr
Originally intended to have a 77-meter spire, the St. Rumbold’s Cathedral in Mechelen holds the seat of the Archdiocese along with the Cathedral of St. Michael and St. Gudula in Brussels. The distinctively flat tower is visited by thousands of tourists every year, and students from around the world come to study at the Royal Carillon School – the first and largest of its kind, where pupils are trained in the art of ringing church bells.

Our Blessed Lady of the Sablon, Brussels

Church
Reading Between the Lines | © Forgemind ArchiMedia/Flickr
One of the most beautiful churches in Brussels, Our Blessed Lady of the Sablon has a late Brabantine Gothic exterior and a richly decorated interior featuring two magnificent Baroque chapels. Originally a small chapel built in thanks by the Crossbow Guild, it was rebuilt into its later form around the turn of the 15th century.

Reading Between The Lines by Gijs Van Vaerenbergh

A less conventional choice, the church constructed by Gijs Van Vaerenbergh is perhaps not a church in the traditional sense of the word, but it pays homage to the typical parochial church and questions the traditional function of a church. In any case, visitors will definitely experience a sense of awe, as the church is completely see-through from certain angles, blending into the landscape in a mesmerizing manner.