Statues In Antwerp Will Soon Start Talking To Tourists 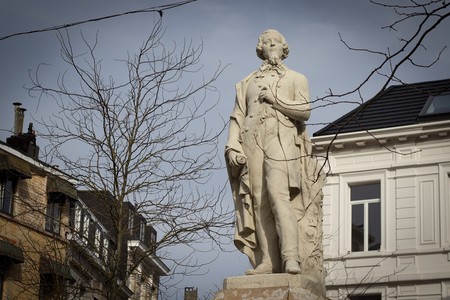 If you’re visiting Antwerp this summer, don’t be startled when you’re admiring a statue and it suddenly starts talking to you. You might hear something like: ‘Hello, my name is Peter the Great. Would you like me to guide you around town?’ and here’s why.

Local politician Dirk Rochtus got the idea for these talking statues after hearing sculptures speak in London, Manchester and Chicago. His fellow N-VA party member and Antwerp district mayor Paul Cordy thought it would be a great fit for Antwerp, local newspaper Gazet van Antwerpen reports.

A pilot project will start in the neighbourhood of Het Zuid this summer. The statues will present people with facts and news about the city and the information offered will be tailored to visitors through the use of QR codes and an app. A tourist might be recommended to walk to a certain local historic hotspot while a local could get news about upcoming events in the neighbourhood.

Nico Volckeryck, head of the local entrepreneurial organisation Unizo, sees great marketing potential in the project. ‘The system would distinguish between different groups of people. A tourist who visits Antwerp for the first time will get general information about the area the statue is located in. But once a visitor has activated our app and has interacted with the statue, it can send them a text message after about six months saying: ‘Hey, I haven’t seen you for a long time, when are you coming back to Antwerp?”. 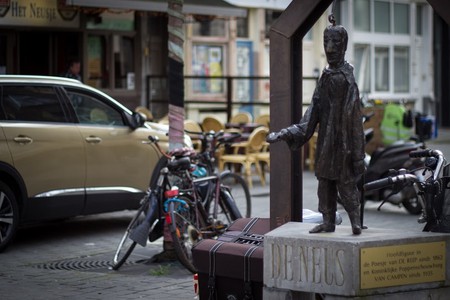 Russia wouldn’t be the Russia it is today without Peter the Great. He was the first Tsar who travelled outside of the country’s borders and made diplomatic connections with other world leaders. He visited Antwerp in 1717 to study shipbuilding and talk to local merchants and tradesmen. In 1998, the city of Antwerp erected a statue in his honour, which stands in the Kloosterstraat, the exact spot where he arrived in the city.

Flemish writer Theodoor van Rijswijck’s (1811 – 1849) statue overlooks a square aptly named after him. He started his professional career as a teacher and bank clerk but found fame as a people’s poet. He lived a bohemian lifestyle and became very involved in national politics. Van Rijswijck spent the last years of his life in a mental institution and today, his works aren’t so much appreciated for their literary quality, but more for being an excellent source of the spirit of the time. 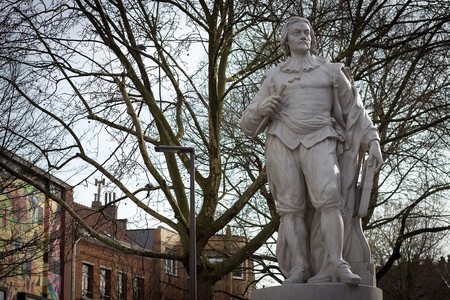 The statue of Jacob Jordaens in Antwerp might soon be talking to tourists. | © Ester Meerman

Painter Jacob Jordaens (1593 – 1678) is widely considered to be the most important Flemish baroque painter after Peter Paul Rubens and Anthony van Dyck. He is best known today for his numerous large genre scenes based on proverbs, such as The King Drinks and As the Old Sing, So Pipe the Young. His statue is located on a little square on a street called Oever.

De Neus means ‘the nose’ in Dutch and it is quite likely this character is named that way because of its substantial snout. There are two different stories about who De Neus is based on. One says its inspiration was Frans de Neus, a local man with a big nose and a drinking problem, while the other claims the character is based on an Italian puppet show figure. The statue for De Neus was created in 1990 and was moved around several times due to construction work. It can currently be found on the corner of the Nationalestraat and the Prekersstraat. In line with his character, once De Neus starts talking, Dutch speakers might be partially addressed by him in the local Antwerp dialect.