Meet The Founders Of En Stoemelings In Brussels, Belgium 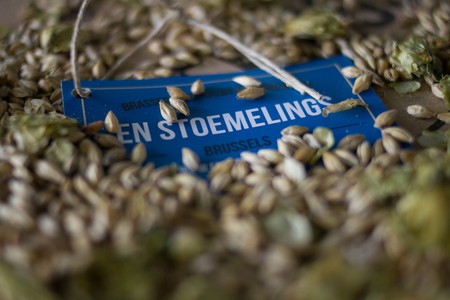 Brussels is home to many specialty bars and pubs. Despite this, the city is surprisingly only home to a handful of breweries. We caught up with the founders of one of these breweries, En Stoemelings. 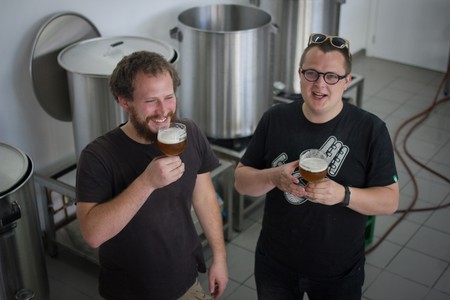 En Stoemelings is a curious name, what is the meaning behind it?

‘En stoemelings’ are words from the language of Brussels. It means doing something under the table, in secret. For instance, during the prohibition, guys were brewing beer and distilling ‘en stoemelings.’ Why choose this? We began in a small kitchen within the basement; a big cooler for the beer. When we were bottling, it was in this same basement, in secret. We also began to sell the beers ‘illegally.’ So we were like a submarine, doing this ‘en stoemelings.’ The name remained afterwards.

How did you come to know each other and how did you get the idea to start up your own brewery?

We first met in school. We were 12. We kept in touch as best friends ever since. I (Denys) wanted to begin a brewery and Samuel wanted to commit to a project. The place and the time were just perfect, so instead of doing nothing we decided to give it a shot. Also, because there were only two breweries in Brussels at the time, we wanted to commit to our city and heritage.

What difficulties have you encountered in establishing your business?

It took us at least one year and a half to be prepared. You have to get multiple permits and allowances to get started. Environment issues, urban ones, fire department stuff, legal contracts, and of courses the permits with the global taxes of alcohol. 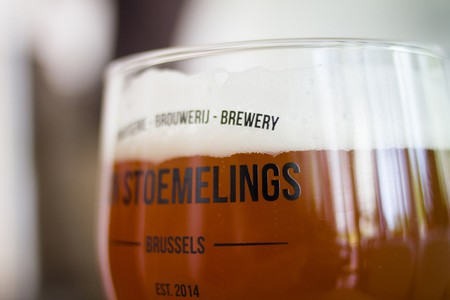 In a country known for beer, Brussels in home to only a few breweries. Why do you think there are so few in the capital?

We may think that it’s because the big industries have taken over the market. People are satisfied with a few beers and they don’t want to know more than they do. But for now, the tendency is beginning to change. People want to know what they drink and how it’s made. We are also young and the generation we represent fits to this new attitude. It’s also not cheap and difficult to have a brewery in the capital of the country because of its status (as a capital). Many are discouraged for this.

If you weren’t running the brewery, what job would you be doing?

I did a five year study at The Free University of Brussels, as an archeologist, so I would say excavate something somewhere in the world, as for Sam, I would say, create a company of his own as a video game studio.

What is your favorite beer in the whole world and why?

Your beer bottles have a curious label, what is the history and reason for the tag instead of a traditional label?

It’s simple. At first we had no tag on the beer, it was still ‘En Stoemelings.’ Then we began to have some demands for our names and phone numbers, etc. So we ordered like 500 business cards each. The impression failed. I had a solution not to waste those cards. Just make a tiny hole then took a string and let it attached to the bottle. It was original and unique so we decided to stay with it. 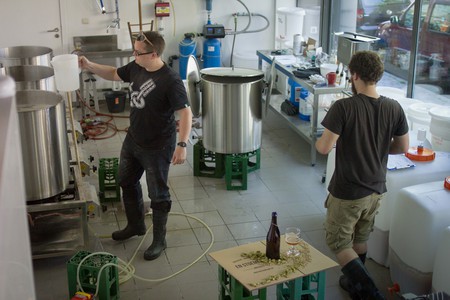 Compared to others in Belgium, En Stoemelings production is relatively small. Do you have plans to expand or wish to keep the operation smaller?

Yes of course, we think in one year and a half we are somewhere else! We tend to search between a 500 and a 1,000 square meter surface. We also want to reach between 15 and 20hl a brew a day. For the rest we will see!

How would you describe how the art of making beer has impacted Belgian culture?

Big impact. This is part of our heritage and we ought to keep it up for the rest of the nation. If it’s not us, it’s not going to be anyone so… the craft movement is also really important, as we want to renew the traditional ways of doing beer instead of the big companies.

What advice would you give to people seeking to brew their own beer at home?

Don’t be afraid, start small with a simple recipe, then go ahead and make more!