Run This Town: Speed Up Your Sightseeing in Brussels 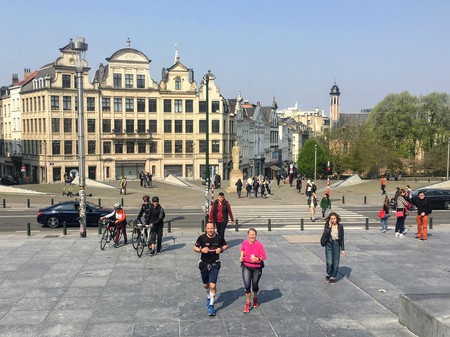 A neat way of exploring a city while getting some exercise in, jogging allows you to reach the must-see spots of the Belgian capital quickly and easily. Brussels resident and enthusiastic runner Sally Tipper joins an expert guide to get a unique tour of the city.

There’s no need to sacrifice exercise while you’re away from home. Running unfamiliar streets is a great way to get under the skin of a fascinating city. That’s why we’re warming up by the canal one windy morning in central Brussels, about to embark on a tour of a lesser-known corner of this town.

Bastien is the manager of Brussels Sightjogging, a non-profit organisation that provides private jogging tours in English and offers four itineraries across different parts of the Belgian capital. Most participants opt for the Historical Centre tour – it covers major sights such as the market square, the Manneken Pis, the Justice Palace and more, so it’s ideal for the first-time visitor – but each itinerary has its attractions. This one focuses on the canal-side neighbourhood of Molenbeek. 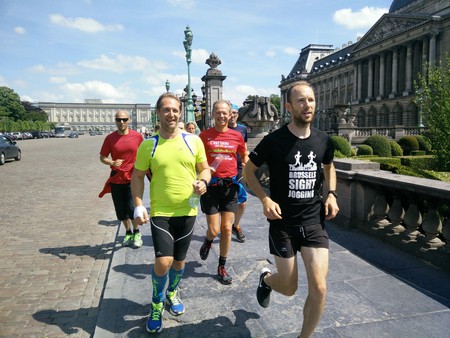 A different experience of the city

Molenbeek is a neighbourhood of contrasts and community engagement, of peaceful squares and public spirit, where the impact of the Industrial Revolution is still visible today – and it’s a district that’s constantly changing. “In 500 years, the Grand Place will still be the Grand Place, but Molenbeek is always throwing up something new to discover,” says Bastien as we take a quick breather to peek inside a building site, where a warehouse is being sympathetically turned into smart offices and shop space. Across the road, meanwhile, an old cigarette factory is in the process of becoming a school.

Back at the canal, we make regular stops to hear snippets about this part of the city. We stand above a ghost metro station that was constructed at great expense and never used. There’s the echo of a vast flyover that was built for the World’s Fair in 1958, then dismantled and sent to Bangkok, where it still stands today. And there’s the glorious Art Deco Citroën garage that takes up almost – but not quite – an entire block, which was slated for demolition in the 1990s but was saved by a grass-roots movement and is now being transformed into a modern art museum with the help of Paris’s Centre Pompidou. 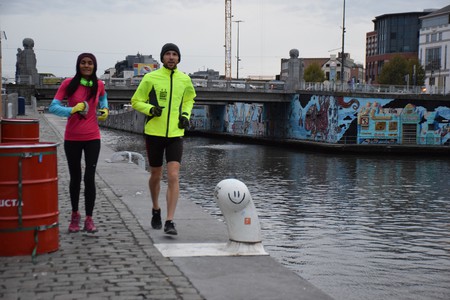 Molenbeek is home to a large North African population; around the canal its traditional markets, teahouses, tailors and bakeries are increasingly rubbing shoulders with more contemporary businesses: co-working sites, start-ups, organic cooperatives, loft apartments and an urban art museum. As we criss-cross through the neighbourhood, we encounter street art and quirky monuments with unlikely backstories. We pause for breath in quiet courtyards and parks unseen by tourists. We admire a thoughtful social-housing project that inspires a sense of community pride, and a monument to those killed in the Paris and Brussels terrorist attacks of 2015 and 2016.

Combining a fitness session with exploring somewhere new like this is a pleasure. At such a gentle pace, there’s plenty of time to look about and appreciate what’s around you, wandering off the beaten path as something catches your eye, while still working up a sweat. Running, especially with a knowledgeable guide, provides a connection that you don’t get if you tend to plug into music or a podcast whenever you run. It’s a valuable reminder to keep your head up and engage with your surroundings as you go.

If that has whetted your appetite for sped-up tourism, there are plenty of events that offer a chance to see the city from a different perspective, from the 40,000-participant Brussels 20km to neighbourhood runs with just a few hundred locals. “I really like the sheer volume of runs in Brussels,” says Sandy. “There’s a good variety of terrains, night runs and urban runs, so it never gets boring.” Fellow runner and Brussels resident Kara agrees. “The runs organised by the various communes are my favourite way to run and explore different parts of the city. The community vibe is great, and no matter what your time at the finish line, you always feel welcome.” 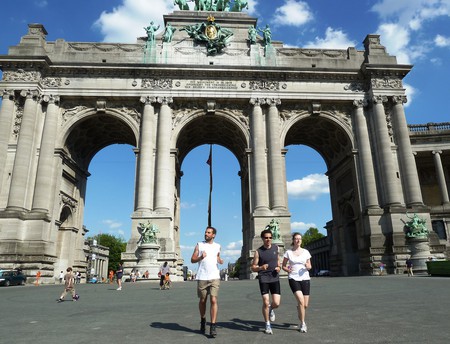 Don’t forget to look around you | Courtesy of Brussels Sightjogging

In Koekelberg, for example, five-kilometre and ten-kilometre (three- and six-mile) courses thread through residential streets and round the landscaped Elisabeth Park, while the annual 12-kilometre (seven-mile) run of Anderlecht takes you across farmland and alongside lakes. For fans of city running, the Urban Trail series will be right up your street, with courses that go inside landmarks such as metro stations, cinemas, concert halls and ballrooms. The Brussels edition is in June; other cities, including Antwerp, Ghent, Namur and Mons, have their own runs throughout the year.

Not everyone enjoys pounding the city streets, of course, and one of the beauties of running in Brussels is that you don’t have to look far to find grass beneath your feet. A favourite spot for trail runners is the vast Forêt de Soignes on the fringes of the city, with numerous events incorporating it in their courses; check out the Hivernales in February, the ULB 10-kilometre run in April, and the EcoTrail in September. So if you’re coming to Brussels any time soon, don’t forget to pack your trainers – and don’t forget to look around you.