Peyo: Master Cartoonist And Father Of The Smurfs

Pierre Culliford, known by his pen name Peyo, was born in 1928 in the right place — Brussels (Schaerbeek), a comic book capital. Most famous for inventing the tiny blue superstars that are The Smurfs, Peyo also drew a wide range of other series. From the adventures of a cat simply named Pussycat (Poussy in the original French) to the stunts of a blond-haired little boy with amazing abilities (Benoît Brisefer or Benny Breakiron), Peyo built a cartoon empire. 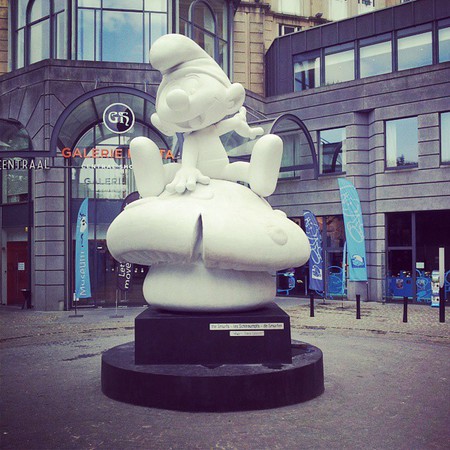 Fascinated more with drawing figures in the margins of his Latin textbook than in the study material itself, Peyo knew some academic failings before turning his attention to other things. His first job came in the form of assistant projectionist at a small movie theater called Le Mirano during the World War II years. It was here that he picked up a love for medieval films and science fiction, both of which would serve as inspiration in his later comics.

The ball started rolling when a friend from choir got Pierre a job at the newspaper La Dernière Heure. In its pages, Peyo created his first success: Johan. The valiant knight was soon joined by goat-riding sidekick Peewit — to tremendous comic relief — and the series would add the name of this oftentimes annoying tiny helper to its title. In the meantime, Peyo also thought up the character of Pussycat to appear in a series of gags in the children’s section of the Belgian daily paper Le Soir.

A Love For Mispronunciation

‘Can’t you look where you smurf? You nearly smurfed me!’ The first smurf ever seen (perhaps Grouchy Smurf) stumbles from behind a rock in the 1958 episode of Johan and Peewit, The Flute with Six Holes (later to be referred to as The Smurfs and the Magic Flute). True to Peyo’s love for mispronunciation – his artist’s name accidentally created by an English cousin who couldn’t articulate the name Pierre properly – is reminiscent of how he came up with the name for the beloved characters that would soon gain international acclaim. Schtroumpf (the French word for Smurf) was the result of a coincidental exchange at the dinner table with his friend André Franquin (father of Marsupilami). Momentarily forgetting the word for salt, Peyo asked him to pass the ‘schtroumpf’ instead, to which Fraquin replied: ‘Here’s the schtroumpf. Once you’ve schtroumpfed with it you can schtroumpf it back to me.’ This not only delivered the friends a weekend of fun with their new language but also provided Peyo with a name for the tiny blue creatures he was planning to draw in the new Johan and Peewit cartoon. 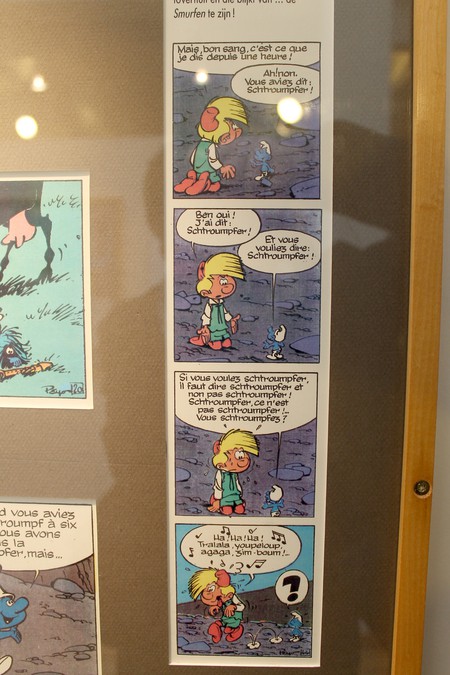 Yvan Delporte, editor-in-chief at Spirou magazine at the time (where Peyo had taken Johan and Peewit in 1952), immediately saw the potential of the peculiar dwarfs living in a village of mushroom-shaped houses. It wasn’t long before the charming Smurfs got their own series, merchandising, and first venture to the big screen in the animated film version of The Smurfs and the Magic Flute (1976). 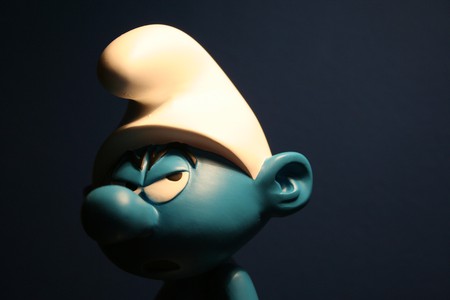 Together with co-writer Delporte, Peyo added an edge of social commentary to his comics that hadn’t been there before. In the words of Peyo, as displayed in the Belgian Comic Strip Center, ‘Sometimes it’s a caricature of the world of adults. You’ll find several failings of our society in the Smurfs.’ A great example of this is the Smurfs’ second album, Le Schtoumpfissime (or King Smurf), a funny yet pointed political allegory. When red-capped Papa Smurf, kind-hearted leader of all Smurfkind, leaves on a trip to find a rare root, mayhem ensues when the King they elect gets too big for his britches. A rebel alliance is formed and a smurfberry fight ensues. When Papa Smurf returns home amid all the chaos, he gets very angry, telling his friends that they are ‘acting like human beings.’

Peyo also delivers a stinging parody of his home country’s linguistics issues (the divide between French-speaking Wallonia and Dutch-speaking Flanders continues today) in the ninth comic book issue, Schtroumpf Vert et Vert Schtroumpf (Smurf Green and Green Smurf). While previously thought that the application of the word ‘smurf’ was random and interchangeable, it turns out there are actually some differences between the north side of the village and the south — one using it as a noun and the other as an adjective or a verb. Tensions only increase as one smurf draws a demarcation line through the town, telling everyone to stay on their side. Although the physical border will disappear, the deep-seated issue hasn’t been completely resolved at the end of the comic. 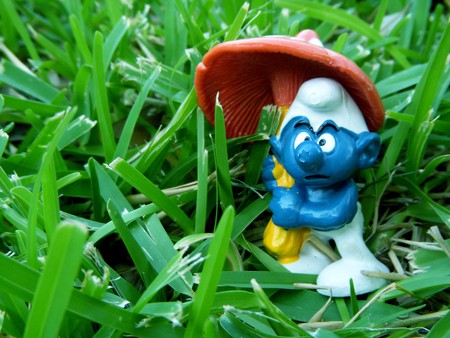 Early on in the Smurf series, Peyo still found time to create another character that would become a true classic: Benny Breakiron (referred to in England as Steven Strong). The small blond-haired boy with the beret and some amazing abilities saw the light of day in 1960. Benny has massive strength and runs extremely fast but loses these skills when he catches a cold (which he does every time he wants to show his adult friends his talents, but they just laugh at him). The production of more Benny Breakiron strips came to a halt as the hectic Smurf success took up all of Peyo’s time in the 70s and especially the 80s when the animated series made the blue dwarfs international superstars. Peyo passed away on Christmas Eve 1992 at the age of 64, but his legacy is still carried on by his own studio, led by his son Thierry Culliford. 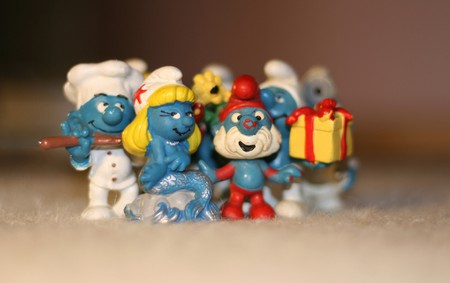