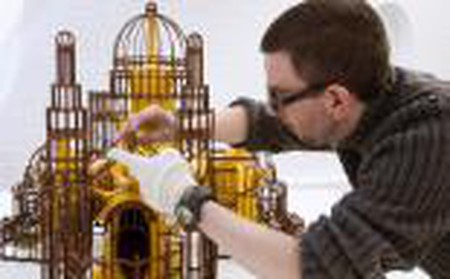 Any Belgian who takes on Rubens at his best—portraying the voluptuous plump fleshy women that gave rise to the term ‘Rubenesque’—is worthy of some attention. Nick Ervinck’s computational sculptures emerge as whimsical, brightly coloured (often yellow), absurdly fun forms that twist and turn into impossible shapes. 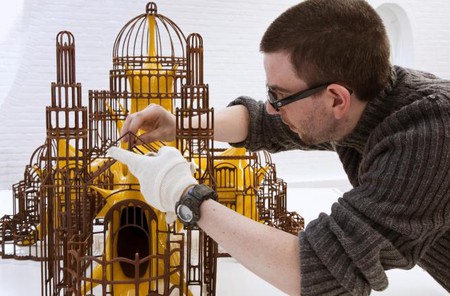 For Nick Ervinck, technological innovation is something that should be embraced by the art world. Each generation of artists has at its disposal a different set of possibilities enabled by technology; paint in tubes allowed the Impressionists to paint in plein air rather than the studio, catching the changing quality of light and shadow, the development of silkscreen printing spurred Andy Warhol to create some of his most iconic works. Now digital design and 3D printing have allowed sculptor-artists like Nick Ervinck to create transformations, distortions, and reinventions of natural forms, including basilicas, corals, dinosaurs, Rorschach inkblots, Chinese rocks and trees, Henry Moore, Hans Arp, manga, floral designs, the human larynx. 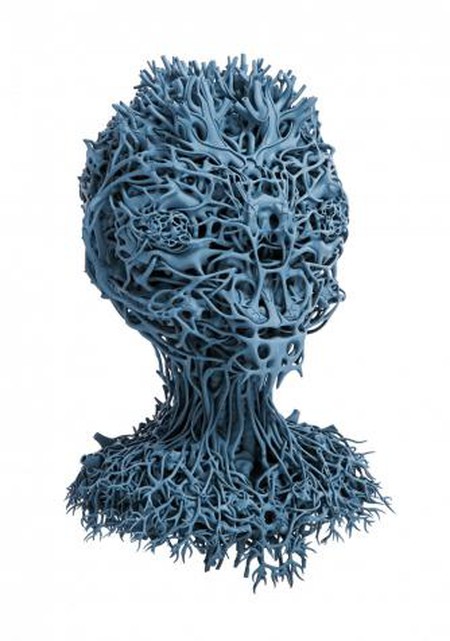 According to Ervinck: ‘As a ‘sculptor I have one foot firmly planted in the digital world. This means that I do not only use the computer as an instrument, but that the digital logic largely determines my artistic thought and method as well.’ In AGRIEBORZ, for example, Ervinck takes the anatomy of the human larynx then takes duplication to the extreme. Reversing the traditional order of things, in which sculptures and monuments are circulated through photographic prints, AGRIEBORZ was first created as a 2D print then took sculptural form through 3D printing techniques. Fascinating for its use of new technology and the cyborg form, the work evokes the fantastical world of science fiction. By retaining its humanoid form, the sculpture juxtaposes familiar objects and conjoins them into an utterly unfamiliar pairing creating a deep sense of strangeness reminiscent of Arcimboldo’s grotesque portraits.

Not only do Ervinck’s sculptures create an interplay between art, technology and organic forms, he also displays a keen awareness of the history of European art. Rubens is and was, of course, the quintessential Flemish artist whose works are seen to represent the height of the Flemish Baroque inspired by the zeal of the Counterreformation. A master of religious painting, Rubens was also the master painter of the female flesh, sensuous, voluptuous and immoderately abundant. Ervinck’s SNIBURTAD, created through 3D print and 3D animation video, explores the bulging formlessness of the ‘Rubens women’ with new technology that re-forms their structure by wrapping the bloodiness of the endoskeleton with its protuberant exoskeleton. The bulging mass emerges grotesque yet alluring. 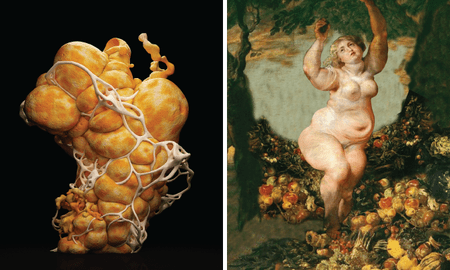 Likewise, YARONULK creates an interplay between the virtual and real worlds. Ervinck’s works exist in multiple media, from 2D prints to 3D printed sculptural models and full-scale sculptures. The graphic image and the 3D structure thus exist as works of art in their own rights. Ervinck’s 2D prints display another singular characteristic. With his meticulous attention to lighting and texture, he creates a trompe l’oeil effect that brilliantly evokes, deliberately or not, a long tradition of Netherlandish art. 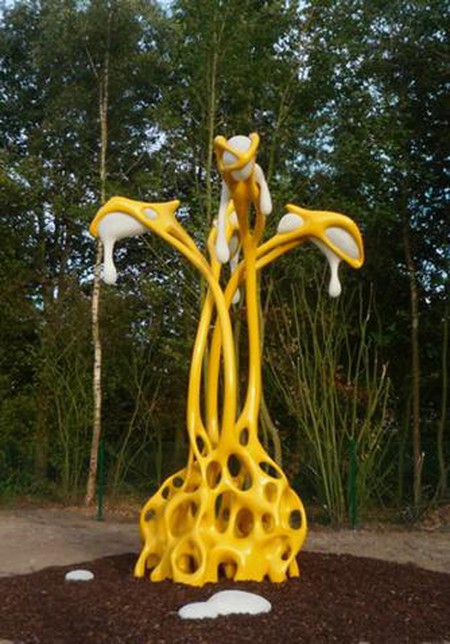 In addition to small-scale sculptures that often make use of 3D printing, Ervinck also creates large-scale sculptural installations that emerge seemingly overnight in urban spaces in his signature cheddar-yellow colour. Digitally designed, the pieces are then manufactured by hand using polyurethane and polyester. Precariously perched, these sculptures are both natural and unnatural; evoking organic forms that seek to integrate into their context, yet conspicuously stand out due to their polished surface and bright yellow veneer.

NARZTALPOKS is one such piece that creates a dialogue with Belgium’s design and architectural heritage as well as with organic form. Designed as a street lantern, the piece is decidedly contemporary in its bright yellow sheen and its polyurethane and polyester materials. At the same time, the lamp seems to emerge out of the ground, a gigantic prehistoric plant pushing its way onto the modern urban landscape. The undulating lines, the dripping bulbs and exposed roots evoke not only the shapes of natural things, but also harken back to the artistic world of the Art Nouveau movement whose architectural style was particularly pioneered by Victor Horta, who twisted iron into curvilinear forms that evoked nature. 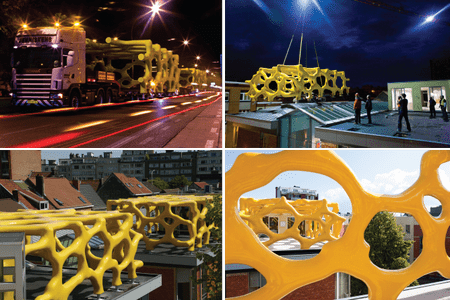 WARSUBEC, Ervinck’s most architectural work, perches on the rooftop of a building in Ghent. Adhering to the basic contour of the surrounding building, the coral-mesh form dances between the architectural and the sculptural, appearing at once both solid and ephemeral. As the artist’s website describes it: ‘WARSUBEC oscillates between the antagonistic architectural worlds of box and blob. It can be read as a blob on top of a box, but it can also be seen as a box itself, containing a multitude of blobby voids. In this sense, it fits perfectly into Ervinck’s constantly evolving fluid universe.’

Nick Ervinck’s fantastical sculptures explore the exciting possibilities of new technology, integrating science, design, art and architecture in his works. Adhering to Rem Koolhaas’ statement: ‘Where there is nothing, everything is possible’, Ervinck pushes sculpture to create a new formal language that straddles our digital and physical worlds.