EUROPE
/
BELGIUM
/
LEUVEN
/
Things to Do 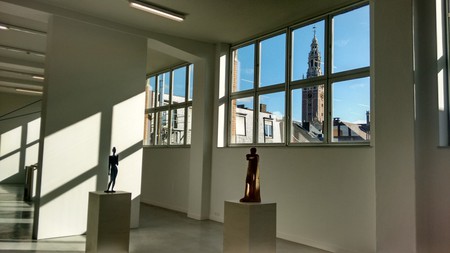 Wandering the streets of Leuven accompanied by the aroma of nearby cafés and the lights of the Central Library, it is impossible not to stop in front of a curious white structure that stands out amid neighbouring Flemish-style buildings. Museum M does not look conventional at all.

Featuring white pillars, glass accents and steps, Museum M‘s entrance hall is a magnificent welcome to the city of Leuven. The bright white entrance opens up to a modern building behind glass doors, where the museum planned and designed by Stéphane Beel stands. Yet, Museum M boasts a long history far before the changes brought by the new millennium.

The Cabinet of Curiosities exhibits relics, works of art and antiquities. A cabinet created in the Leuven town hall in the 18th century started to develop into the municipal museum that can now be admired and visited. Due to the lack of space, the museum was moved to the former private residence of Mayor Leopold Vander Kelen in the Vanderkelenstraat and, through generous donations, its content increased in variety and quantity. After undergoing a series of alterations and enlargements in the 20th century, the entire architectural structure of the museum was revisited in order to reflect its content.

The diversity of the collection, counting works produced in the Flemish Brabant during the Middle Ages and the late Gothic period, as well as contemporary pieces, demanded a new style, which was commissioned in 2004. The principal architect was Stéphane Beel, a designer well known across Europe and responsible for the expansion of the Centraal Museum in Utrecht and the pavilion of the Rubens House in Antwerp, among others. The result is the curious mix of four buildings: two old, namely the former Vander Kelen-Mertens residence and the former university college of Saint Ivo, and two new. Even the contemporary entrance hall is announced by an old structure that belonged to the former faculty of science.

The first of the three floors gradually introduces visitors to the Flemish paintings and objects of the Middle Ages. Recreating the atmosphere of a cathedral, with high ceilings and suffused lighting, Museum M shows statues, stained-glass windows and religious garments from different churches and abbeys in the region, before introducing the most vivid and impressive collection of this floor: a room where the Flemish primitives are the absolute protagonists, and it becomes difficult not to halt in front of Dirk Bouts‘ meticulous works, trying to grasp every detail.

The big contrast between 15th-century and 19th- to 20th-century paintings is enhanced by a sudden change of light. Spacious and modern salons, where the white walls and the combination of artificial and natural light obscures their real dimensions, host paintings and sculptures by Constantin Meunier, a renowned Brussels artist, who lived and taught in Leuven. The environment changes again after a few rooms when a small corridor leads to the former Vander Kelen residence. Beel has given the residence its ancient splendour, by using the original colours and parquet, and removing additions that had been made to the original structure.

Accessible through an elegant wooden staircase, the upper floor opens its doors to temporary exhibitions, often juxtaposing different historical periods. On the third and last floor, visitors are beckoned by the natural light and the modern terrace. From there, on sunny days, the marvelous view of the Central Library tower, the pinnacles of the old town hall and the inner garden of the museum offer the perfect closure to such a unique visit.