The artist discusses his lifelong fascination with disguises and the pleasure of discovering the masks of others.

Five-masked woman, armed with longbows and submachine guns are posing en garde above the words: The Revolution Will Be Female. I am visiting 42-year-old artist Marcel Dzama at his Brooklyn studio which—though brimming with eye-catching curios—is organized enough for this poster-sized drawing to lay flat in the center of the room. “It’s something I was working on for International Women’s Day,” he says, adding that he had made another version as a sign for the Women’s March on Washington. I later discover on his Instagram a handful of such posters he’d drawn up for protest marches. 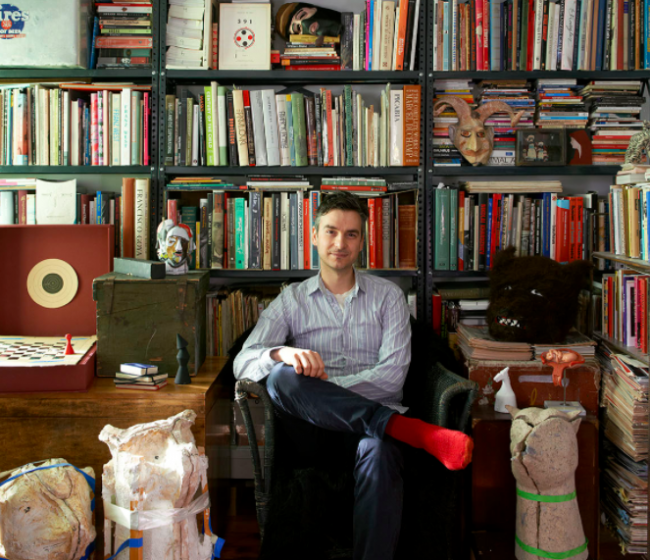 Dzama, pacific in character and gentle in speech, has seen the playful macabray of his illustrated characters and creatures—including goat-head dictators, dancing tree people, and sinister-looking masquerades—emerge from the art world and into pop culture in music videos, cinematic films, large staged-productions, and magazine covers. With his fame, Dzama has leveraged support toward various initiatives such as the children’s non-profit 826NYC and the American Civil Liberties Union. At a time when the arts and education have come under unprecedented threat, sloganeering seems a natural output for the artist’s creativity.

After airing out our concerns over the latest news, I turn our attention back to the illustration. I’m curious about the masks over the women’s faces, a trademark of his visual mythos (rarely does Dzama leave a human head undisguised). So omnipresent are masks in Dzama’s art that when his gallerist, David Zwirner, approached him about curating the gallery’s booth at the conceptual art show Independent, opening in Brussels this month, theming it with facial disguises seemed a no-brainer.

For The Mask Makers, however, Dzama is curating works that figuratively demonstrate or abstractly define the veil by drawing from three primary sources: artists represented by the David Zwirner Gallery, artists he has hand-selected, and new work that he is making for this show. More traditional impressions of masks that Dzama has included are Sherrie Levine’s bronze casts of mythical animal visages, though not all the pieces are orthodox—it’s difficult to imagine a face behind Al Taylor’s inscrutable painting “Incognito”—but nor does a good mask give the face behind it away. A series of corpse-faced models photographed by Wolfgang Tillmans, which Dzama only discovered after beginning his research for the show. “You’d expect someone like Wolfgang to have, you know, like one or two mask-like works. But a whole series, that’s a find.” 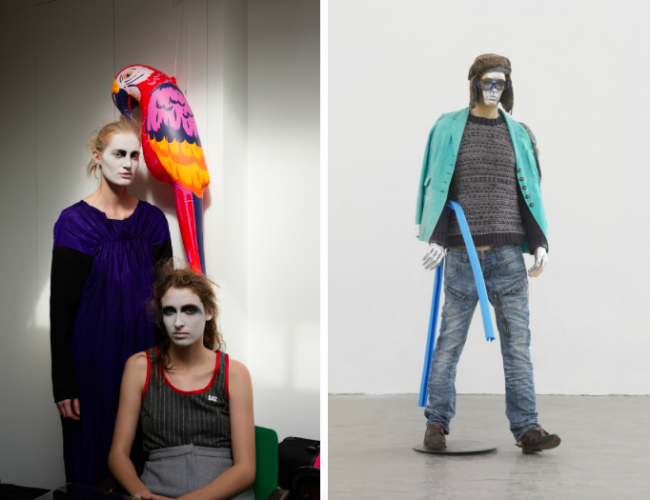 The show also includes artists from beyond the Zwirner stable: A portrait of a woman’s face cloaked behind steamy shower glass by photographer and film artist Marilyn Minter; a toilet seat crafted from an assortment of media by Hans Accola; and a figure dressed in a fire-engine-red burqa, posing in front of a fringe curtain, photographed by Young Sun Han. “My main constraint was keeping in mind that this was going to be a commercial show for Zwirner,” he answers, “so I primarily pulled from their roster, which wasn’t too difficult since I love all of those artists.” But, he adds, cheerfully, “I’m excited that David let me bring in some of artists that aren’t with his gallery, just because I really wanted to include their work. So there’s still this personal, non-commercial aspect to it that I’m happy about.”

Dzama credits the impetus for the exhibit’s theme to the 19th-century proto-expressionist painter James Ensor. “When David mentioned Brussels, I immediately thought of Ensor’s painting Christ’s Entry into Brussels, 1889.” He pulls up the painting on his phone and shows me a parade of garish figures: “There’s just so many crazy and wonderful faces on it,” he says, pointing to a harlequin peeking out of a corner. “I think that was the true catalyst for the theme.”

Dzama is, in many ways, the perfect artist to curate a visual masquerade. Masks have been prevalent in the artist’s work since he first started taking drawing seriously. Dzama cites Inuit art, notably the work of Nancy Pukingrnak Aupaluktuq, along with cartoon superhero and bandit designs as early stylistic templates. “I used to use balaclavas a lot in my drawings,” he told me when describing the evolution of his masks, “especially on female bodies, until someone pointed out that they looked just liked Pussy Riot. It was hard to argue that I had been drawing that look for years.” He shrugs his shoulders. “At least I didn’t color my balaclavas pink.” 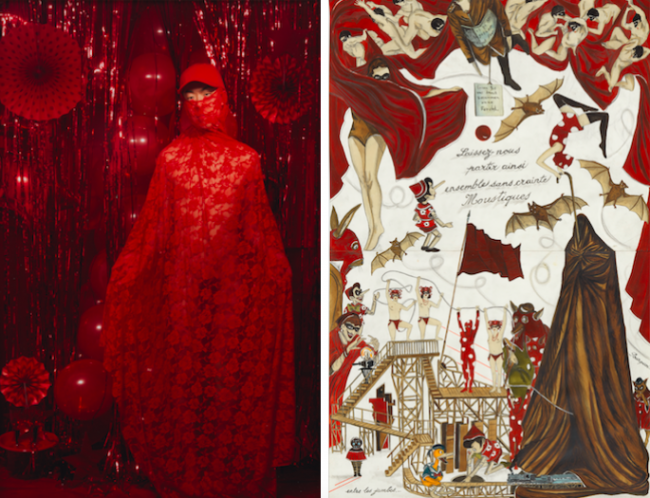 Other masks prompt Dzama to recall childhood memories: “The mask I designed for my film Une danse des bouffons, was based on a happy/sad mask that my grandmother brought me from Hawaii.” This recollection unearths another personal history: “I would make these home videos starring my dad and sister. But they would always be smiling, so eventually I made masks for them to wear to cover their actual facial expressions.” He looks away, bemused. “You know, I had totally forgotten about that.”

Dzama’s earliest foray into curation coincided with his involvement in The Royal Art Lodge, the art collective he co-founded in 1996 with a group of fellow Winnipeg artists, including Michael Dumontier and Neil Farber (who is, confoundingly, Dzama’s younger uncle). Because bands seldom traveled to the Manitoban capital, he tells me, art shows became popular public events: “The rent was so cheap that we had this huge studio space and took turns curating art shows, like every other weekend.”

That spirit of collaboration has stayed with Dzama, who has partnered with such luminaries as the Arcade Fire, Kim Gordon, Spike Jonze, and the New York City Ballet. He describes his recent creative relationship with fellow artist Raymond Pettibon as being “more enjoyable than working solo.” The duo started out jamming on paper, and the results caught the attention of David’s son Lucas, the editorial director of David Zwirner Books, who encouraged them to produce more pieces, which in turn developed into a zine for the New York Book Art Fair, with another zine printed for the pair’s London show (a third zine was sold for the aforementioned ACLU benefit). “It’s like jazz improv where we don’t know what the other will do,” he says, “but there’s definitely a flow to it that we are both able to lock into.” Dzama plans to include highlights of  their collaboration, along with Pettibon’s own mask work, at the show. 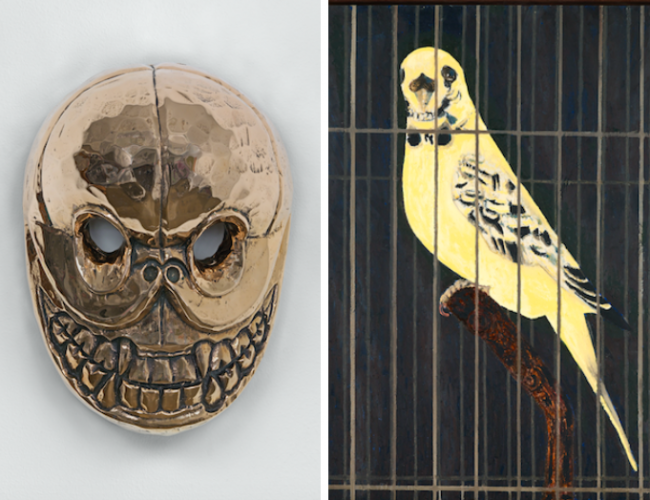 “It’s been like putting a mixtape together,” Dzama says of his assembly for The Mask Makers, “or maybe that’s a bad example, because it’s not just selecting work, but actually communicating with artists that I might not have previously met, but that I’ve admired from afar.” Dzama is still planning the look of the booth, which he says will be wallpapered in a “weird costume ballet face thing” of his own design. “I originally wanted to make it salon style,” he says, “and to really overcrowd the space with all these faces staring back at you no matter where you looked. But then it occurred to me that if the booth became its own installation piece, it would’ve been difficult to distinguish each artist’s work within it.” He grins: “And that would have defeated the entire purpose of the show.”

Marcel Dzama’s curated booth for David Zwirner will be open for Independent Brussels from Wednesday April 19 to Sunday April 23, 2017. Admission is free and open to the public.