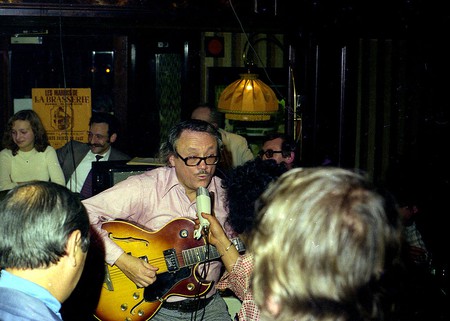 Toots Thielemans, born in 1922, is considered to be one of the greatest harmonica players of the 20th century. His collaborations with legendary artists such as Benny Goodman and Sidney Bechet, and his own compositions made him a jazz icon both within his native country, Belgium, and abroad. The Culture Trip looks at his life, examining how he shaped his work in the process.

Toots was born as Jean-Baptiste Thielemans in the Marolles, the oldest and most unpretentious district of Brussels in Belgium. When he was a small child, an accordion player performed in his father’s café, captivating him. His parents quickly noticed his musicality and bought him a little accordion. It did not take long before Thielemans could play the Belgian national anthem and the “Internationale” – the battle song of the worker’s movement – on his tiny instrument.

Later, he was inspired by the soundtrack of a James Cagney to purchase his first harmonica at the age of 14. Toots was asthmatic and, as a matter of coincidence, playing the harmonica turned out to be good for his health. Then the war came and the first jazz music hit the European radio stations. Toots instantly fell in love with the new genre, especially after hearing Louis Armstrong. He learned to play the guitar and started jamming with American troops in Brussels’ bars.

After the war, he traveled with his adventurous uncle to the United States by ship, bringing his guitar and harmonica with him to perform at the local bars there. Agents and managers picked him up quickly and soon he was invited to tour with Benny Goodman. At first, this was only in Europe because visa issues prevented him from staying in the States very long, but he was so eager to make it in the States that he applied to become an American citizen in 1952 which made it a lot easier for him to tour and perform.

In 1962, he wrote his biggest hit, “Bluesette,” where he used whistling and guitar in unison. The sound was so original that it became an instant jazz standard. In the meantime, he was advised to call himself Toots because it sounded cooler and more international than Jean-Baptiste. His distinctive sound made him very popular, as did the fact that the harmonica was and still is a very uncommon jazz instrument.

Toots was asked to play for many film soundtracks; the best known are Midnight Cowboy (1969), The Getaway (1972), and the Dutch film Turkish Delight (1973). He also composed and played a lot of jingles for radio and television; the most famous being the intro music for Sesame Street and a commercial for the perfume Old Spice, both of which increased his popularity exponentially in the United States. However, his collaborations with other jazz artists are most likely his greatest achievement. In the course of the years he worked with Charlie Parker , Ella Fitzgerald, Oscar Peterson, Paul Simon, Billy Joel, Quincy Jones, Stevie Wonder, and many others.

In the 1970s, he started to become attracted to Brazilian music; he stated that there is a great similarity between Brazilian melodies and jazz harmonies. He worked with singers like Elis Regina and Astrud Gilberto, and with composer and vocalist Ivan Lins. His albums The Brazil Project 1 & 2 were amongst his own favorite works. In 1981, Toots at age 59 suffered from a cerebral hemorrhage, exactly one year after he had married Huguette Tuytschaever, a Belgian artist. His first wife Nette De Greef had passed away four years earlier. As a result of that stroke, he was no longer able to play the guitar as before, though the harmonica proved to be no problem.

Toots continued to perform regularly, at concerts such as the Jazz Middelheim festival in Belgium and in 2012 for his 90th birthday, together with the equally legendary Herbie Hancock at the Lincoln Centre in New York. Of course it is his unique harmonica sound that made him so popular but people also love his charming personality and that Toots has always stayed the simple “ket” (street slang for kid) from Brussels even though he was ennobled as a Baron by King of Belgium Albert II in 2001.