From grotesque beasts masquerading as a street band to anonymous figures joining a grand masquerade-cum-street-festival, Belgian artist James Ensor was a master of the unsettling and the strange.

Born in 1860 in Brussels to an English father and a Belgian mother, James Ensor spent the vast majority of his life in Ostend. Ensor lived and worked attended the Académie Royale des Beaux-Arts in Brussels; for the next 37 years, he worked out of his studio in the attic of his parents’ curiosity shop. A painter and printmaker, through most of his life and career, Ensor considered himself an artist on the fringe of society even as society turned to embrace him. By the time of his death in 1949, King Albert had granted him a baronial title, his works had been the subject of major exhibitions and he even had a a musical composition, the ‘James Ensor Suite’ by Flor Alpaerts, named after him. 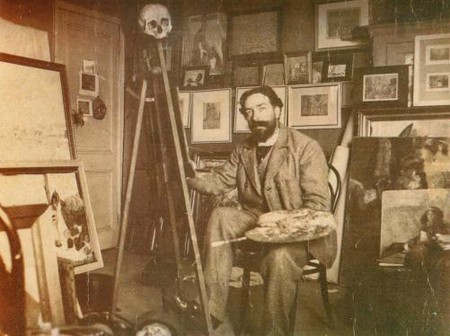 He is particularly known for his paintings of grotesque figures with their faces and identities hidden behind masks. Irreverent and sardonic, Ensor’s figures appear as caricatures — or actors playing their assigned roles — within the grand farcical performance of modern life.

Ensor’s best known work is Christ’s Entry into Brussels in 1889. The subject of the work is, nominally, the city’s welcoming of the anointed King Jesus into modern Brussels. Ensor seems to draw from a mix of festival imagery and images of royal entry processions — a long tradition that stretches back to the 16th and 17th centuries in which cities would document the Joyeuse Entrées of their rulers through paintings and prints.

Likewise, the figure of Christ in religious imagery is, of course, nothing new. Jesus as a baby in a manger, Jesus and his mother Mary, Jesus displaying his authority over nature, over sickness, over death, Jesus crucified on a cross — the images permeate the history of European art and filled the cathedrals of Ensor’s native Belgium.

In Christ’s Entry into Brussels in 1889, the atmosphere appears fittingly festive. The grand avenue is festooned with banners filled with slogans, a brass band, marching soldiers that look rather like wooden toys. And then there is the crowd. Teeming, swarming, seething with energy, the crowd spills into the streets of Brussels to, as the title would suggest, celebrate the entry of Christ into Brussels. 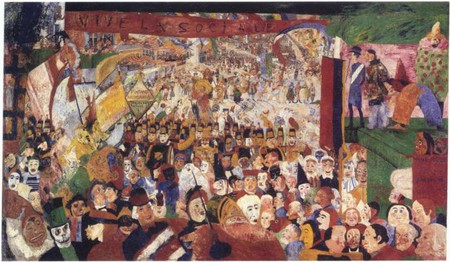 However, the scene is surreal, not only because the scene pictured is obviously constructed. More a spectacle than entry celebration, Ensor’s painting turns the academic — and Flemish — traditions of royal and religious painting on their heads. Rather than facing the entering Christ, ghoulish masks and equally mask-like faces peer out of the work at the viewer. Ensor’s composition with a strong perspectival line creates the unnerving sense that the whole cacophonous crowd threatens to rupture out of the frame into our viewing space. Rather than celebratory, the mood is discordant and eerily threatening. The canvas is too full, too red, too chaotic.

Some have suggested that Ensor — who was non-religious — equated himself with the suffering, ignored figure of Christ in the centre of the painting. According to the J. Paul Getty Musuem, which owns the work, ‘The haloed Christ at the center of the turbulence is in part a self-portrait: mostly ignored, a precarious, isolated visionary amidst the herdlike masses of modern society.’ Whether this was the artist’s intention of not, in several of his self-portraits, Ensor does indeed portray the artist as a tortured being, crucified on a cross, decapitated and served up on a platter, being ripped apart like a piece of herring, as a skeleton in front of his easel.

However, this belied the artist’s actual position within the art world and society. By the time of his death, James Ensor had become one of the most celebrated Belgian artists of his time. Since then, he has been seen as an important precursor to the modern art movements of the 20th century, having bridged the gap between 19th century Realism and 20th century Expressionism.