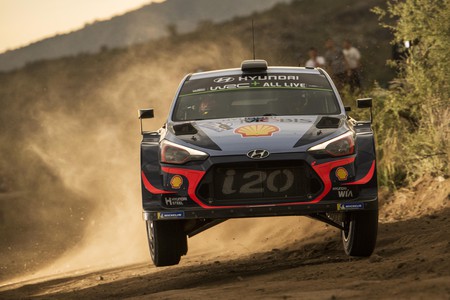 Hurtling over dirt-laden tracks or through monsoon-like conditions at 80 miles per hour requires tremendous amounts of skill and bravery. Rally drivers have to keep their minds agile and their bodies in peak condition, so with that in mind, Belgian speedster Thierry Neuville guides us through his exercise routine during the season.

Hyundai rally driver Neuville has been racing at the FIA World Rally Championship for nearly a decade. He has 154 stage wins to his name, as well as 31 podium finishes, and two wins in this year’s WRC season, in Sweden and Portugal. 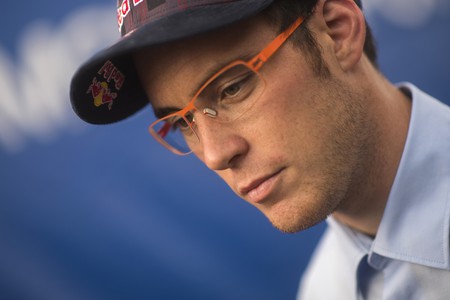 Away from the track preparation is integral to performance, with a huge focus on improving fitness and ensuring drivers are race-ready. The 29-year-old Belgian explains, ‘If I am haring down a dirt track at 140kph, cutting the bends perfectly and making jumps that are dozens of metres long, I must keep control at all times. Focus, alertness and responsiveness are extremely important and I need lightning-fast reactions. Rally driving takes a lot out of your body.’

Focusing on core strength, balance, and strength and conditioning, here are eight simple drills from Neuville’s routine that you can replicate yourself.

A drill that focuses on coordination and precision, as well as endurance. Rally drivers have got no time to look at the pedals while they’re driving given the challenges they face and this is fantastic for arm-leg coordination. Jump on and off a tyre, while keeping your arms out stretched in front of you, using an elastic strap for resistance.

An exercise that mirrors the body position of rally drivers while they are behind the wheel, but in this instance the steering wheel is weighted. This is perfect for improving strength in the back, as well as the grip in your hands thanks to the replicated driving position. 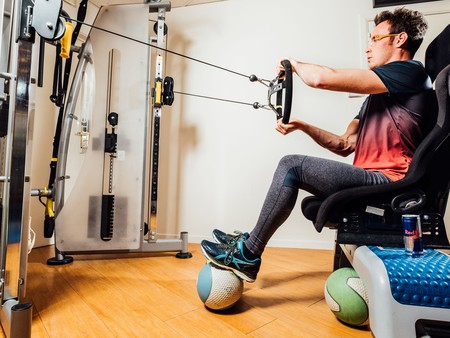 Catching a tennis ball is simple enough, but by holding a weight in one hand and looking straight ahead, you create an extra challenge. It’s an ideal way to improve responsiveness, with drivers relying on their peripheral vision to pick up key details as they go. It’s also anther good exercise for improving shoulder strength.

Do: Four times for 30 seconds.

Combining speed and balance, this exercise involves perching on a car tyre, while rotating a power loop in your hands. You can add extra elements of resistance if desired, but the training is focused specifically on the strength and speed of your arm movements.

A strong core is essential for building strength throughout the body, as well as contributing to overall balance. Both these qualities are needed given the G-force that drivers put their bodies through, particularly the neck and shoulders. Planking helps with balance and core strength, and doing so on a car tyre with controlled rolling from right to left adds an extra dimension. 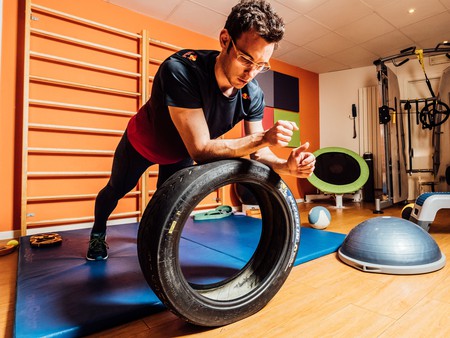 Professional rally drivers like Neuville use a wall that lights up at random points, hitting each light when it flashes on. This works on speed and responsiveness, so that when looking ahead drivers can pick up as much extra information in their peripheral vision as possible, and then react accordingly. Such specialist equipment is obviously hard to come by at home, so replicate it by sticking post-it notes on the wall, all numbered, and have a training partner shout out numbers at random.

Do: Three sets of 50 correct touches.

Sit on an exercise ball, hold a weight at the height of a steering wheel and turn it from side to side. While turning the wheel you can stretch out your left leg – the leg you’d brake with – for an additional test of balance.

Do: Four times for 30 seconds. 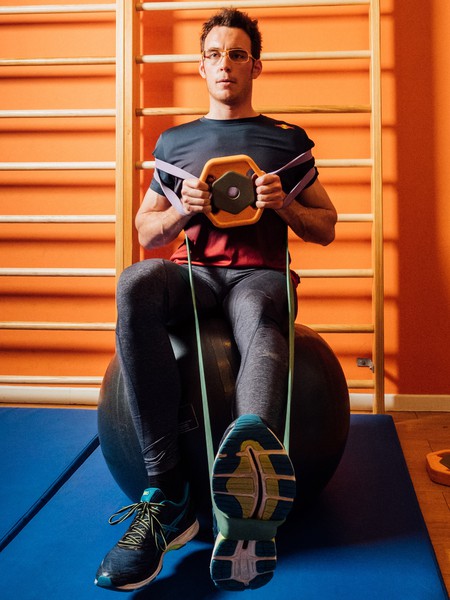