How Did Mussels Become A Belgian Specialty? 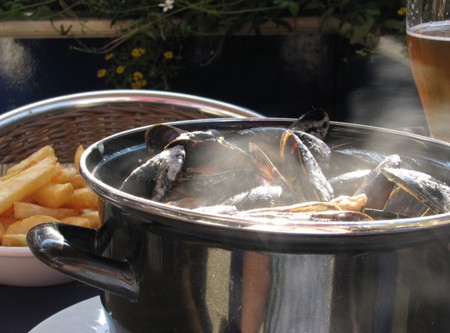 When it comes to the classic dishes of Belgian cuisine, moules-frites is certainly a popular choice. From the Belgian coast to the streets of Brussels, most people are familiar with the large steaming pots laden with mussels coated with a white wine sauce and drizzled with fresh herbs and vegetables. But do you know how this dish became a Belgian specialty? Besides the obvious ingredients, national dishes usually contain a handful of history and a pinch of geography. 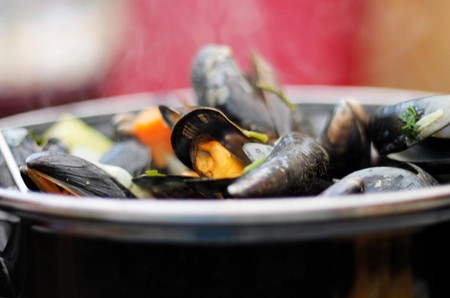 Some history behind this national obsession

Mussels are highly popular and are served virtually everywhere in Belgium. While enjoyed all over the world, there have been many disputes regarding the exact origins of the dish. Similar to the origin of fries, this humble filter-feeder was also at the center of a stormy row between Belgium and France.

To settle the moules-frites diatribe, historians went to the trouble of digging up a 1781 Flemish manuscript which recounts the story of the dish. Very similar to our modern-day Belgian specialty, mussels were prepared in Belgian homes, especially during the wintertime when there was a shortage of fish. Plentiful along the coasts of the North Sea, mussels were a cheap alternative and quickly adopted by Belgian families. This somewhat quashed the French claim on this Belgian staple. 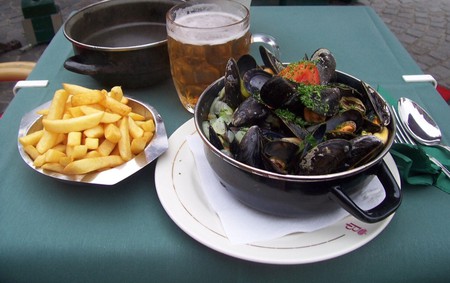 All about the location

Zeeland, the western coast of the Netherlands, is the perfect place for the young mollusks to grow. As mussels tend to live on exposed shores in intertidal waters, the vast coastal area of the delta formed by the rivers Meuse, Rhine, Schelde and Elm formed an ideal habitat for mussels to live.

Though over 60,000 tons of mussels are consumed yearly in Belgium, none of these are produced ‘in-house.’ So how did mussels come to be considered a classic Belgian dish? The answer lies in the historic canals that brought seafood daily to the heart of the city. The Willebroek Canal, which connected Brussels to the River Schelde and then on to Antwerp and finally the North Sea, completed in 1561, arrived at the Place Sainte-Catherine. It comes as no surprise that Belgians developed a taste for les moules.

Once considered the poor man’s meat, mussels are now sometimes referred to ‘black gold’ given to the high demand. Connoisseurs will tell you that the best mussels come from the Scheldt, a shallow river connecting Western Belgium to the Netherlands. 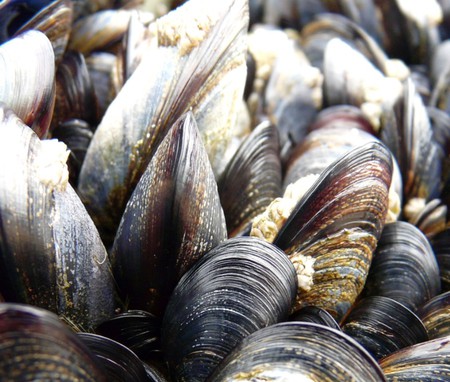 The season for mussels

Mussels have a very long season, which starts in July. In principle, the Belgians often live by the motto: ‘You eat mussels only during those months containing an ‘r.’ However, not many people know that mussel season runs from July through mid-April the following year. 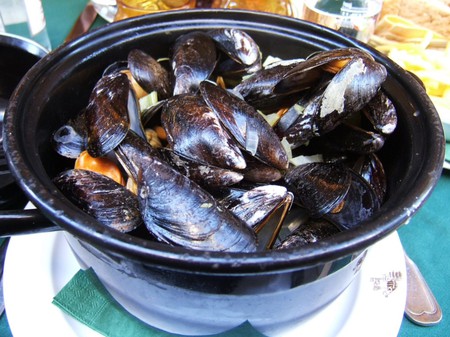 Variations of the culinary classic

A more common recipe for mussels is a white wine sauce with shallots, parsley and butter, but there are also other numerous ways to enjoy this meal. Take the moules à la crème where the stock is thickened with a bit of flour and cream or the moules à la bière where the sauce contains beer instead of white wine. But the choices do not end there, as most restaurants cater to a full menu of variations of this dish, ranging from a more varied mix such as Mosselsaus with mayonnaise, vinegar and mustard to a more traditional version with steamed vegetables in a vinegar-based broth.

When it comes time to dig into the pot, do it the Belgian way and replace the fork with an empty mussel shell, and use it to crack open a fresh shell and dig out the juicy mussel. Bon appetit!