Get Back to Nature by Bathing in Brussels’s Sonian Forest 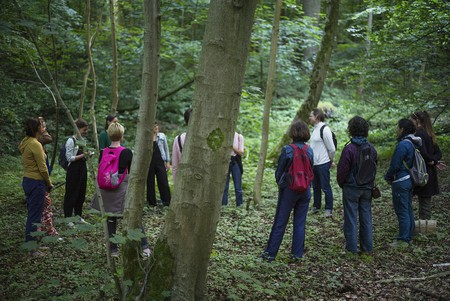 Brussels is a city as tightly wound as the politics of its European Quarter. But with one of Belgium’s largest woodlands on its doorstep, urban dwellers are now finding new ways to de-stress, through the Japanese art of forest bathing.

Belgium isn’t short of magical woodlands. Its southern border alone bristles with vast swathes of the Ardennes. But the Sonian Forest is something different – not least because 40 percent of its surviving 43 square kilometres (17 square miles) of forest lies within the fringes of urban Brussels, which shares this wilderness with the neighbouring regions of Flanders and Wallonia.

The Sonian has long been the wild lungs of the capital. Home to populations of deer, boar and fox, it spans hectare after hectare of beech forest dating as far back as the last ice age. In 2017, the three regions even came together to ensure UNESCO recognised a protected section of the forest. In a country so often divided by language, for once there was no misunderstanding when it came to the value of its woods. 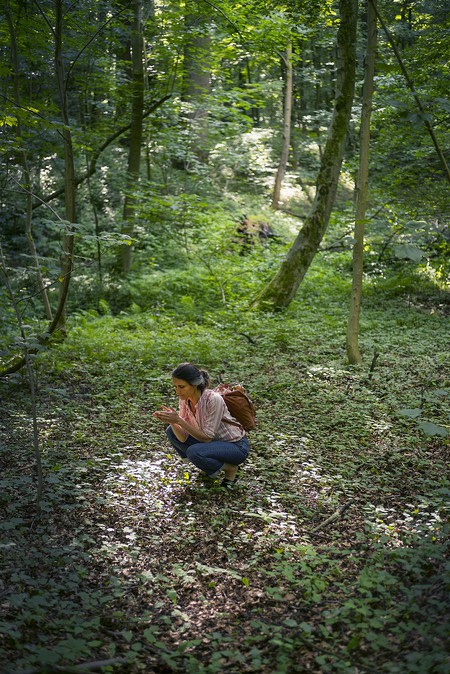 So, given its rift-healing powers and proximity to the city, it’s little surprise that the Sonian has become the centre for a growing trend in Belgium: forest bathing.

Forest bathing, or shinrin-yoku, originated in Japan in the 1980s. The practice made its way to Europe in 2018 when a key book on it by Dr Qing Li, an expert and president of the Society of Forest Medicine, was published in English.

Japan has some 62 certified ‘therapeutic’ forests to go with a raft of studies claiming the curative effects of a meditative wander in the woods, from lowering blood pressure and stress levels to improving concentration and the immune system – a handy resource for a country where 80 percent of people live in urban areas.

In Belgium, where a reported 80,000 people suffered from work-related stress and burnout in 2016, forests offer respite. Indeed, local governments have erected signs to teach shinrin-yoku techniques in woodlands across Flanders, and more recently in the Sonian, too, around Groenendaal. But like any new endeavour, it pays to have someone show the way. 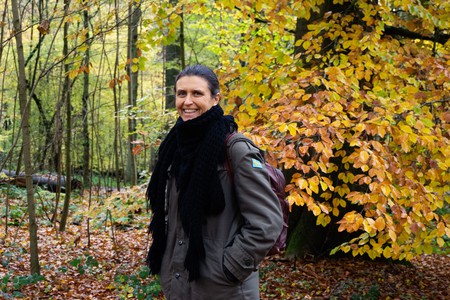 A walk in the woods

It’s 25 minutes by metro and tram from central Brussels to Boondaal and just a 15-minute stroll from there to the Gravendreef. It’s here that I meet Ilse Simoens, a local, English-speaking forest-bathing guide who offers long therapeutic walks in the Sonian.

Simoens normally leads groups (up to 12) barefoot in summer, allowing her charges to strip their shoes if they feel comfortable. But it’s a chilly autumn day, raining pretty hard (“Perfect weather for forest bathing,” she reassures me), and she only takes off her shoes at these times when walking alone.

Tidy in her ways and calmly spoken, by day, Simoens works as a researcher. On the side, she jointly runs forest-guiding courses for those wanting to learn more, but the walks are more popular, allowing visitors – mostly city dwellers – a three-hour taste of what forest bathing involves.

First off, there’s no water. “It’s about connecting with nature and seeing it as a part of you. If you have this connection, it’s the basis to guiding others,” explains Simoens.

We start by heading off the main path. As it’s part meditation and part mindfulness, mobile phones are banned, and walks progress at tortoise-like speeds and in silence. “Because we walk so slowly, people sometimes begin thinking this is so unnatural and start wondering if they have time to do this. Then, after a while, they get into it,” Simoens reveals.

Having strayed off the beaten track, we pad the soft leaf litter between islands of bright-green moss before coming to a halt. It’s here that the exercises begin.

How do you feel?

“The exercises are about opening up the senses,” explains Simoens. We begin by talking (or not – there is always that choice) about how the forest makes us feel, and then we split into pairs and listen intently to the other person speak, just focussing on their words as the rain patters the leaves above.

Other exercises cover sight (shutting your eyes as Simoens implores you to breathe, stretch or relax) and touch (just feeling the leaves and trees and your own body within that setting). The idea is to detangle your senses so that you can lose yourself in the surrounding nature.

Next come the ‘invitations’. I’m invited to wander off and slowly dig a hole, pick up the dirt, smell it, focus up close on the leaves and then on the forest around me. Each task breaks you out of your usual reflexes, demanding you slow down to see something you’d ordinarily rush past.

“It’s important people feel these tasks are an invitation,” Simoens insists. One involves investing objects (sticks, rocks) with your toes and just leaving them behind; another requires you to nuzzle down next to a tree, or even hug it – “If you feel comfortable doing so,” she says – for 15 minutes.

“Some just come for this,” Simoens smiles. “You leave it open; if you tell people to do something, they won’t. Those who do this regularly always want to sit longer, to stay longer. Forest bathing is not something you can do if you keep thinking about the time. That’s why we remove all watches.”

To finish, we sit on mats while Simoens pours a splash of ginger tea on the ground, giving thanks to the forest, before passing me a cup. I paw cold-fingered at the chocolate, the drip of the rain from the leaves the only other sound as we sit, soaking in the quiet.

“We are all really disconnected, and people want to find ways to connect,” Simoens tells me. “Even when you go for a walk in nature, most want to go a certain distance or achieve something. There are always aims. But that is not the point of forest bathing.”

I drain my cup and think back on the afternoon. This journey was no mere walk in the park. There is a structure, a breaking down of how you see the world, only to make you realise why you see it that way. I explored one of Brussels’s wildest corners, and I do feel calmer – but it’s difficult to say why. Simoens sees me trying to join the dots and smiles.

“The aim is to not really have an aim. It’s just being there,” Simoens says. She pours another cup of tea in silence, and it feels like the whole world has let out its breath.