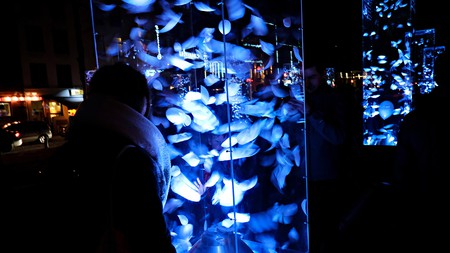 Late winter sees the Belgian capital transform its little-seen nooks and most recognisable landmarks into a festival of colour and imagination. So light up the dark nights at Bright Brussels: Festival of Light.

Picture beams of light shooting across the interior of a pitch-black 12th-century church and bouncing off Romanesque pillars. Or the stately façade of the Lady of Sablon Church bathed in a polychromatic rainbow as you’re invited to scan every Gothic texture and cornice anew. 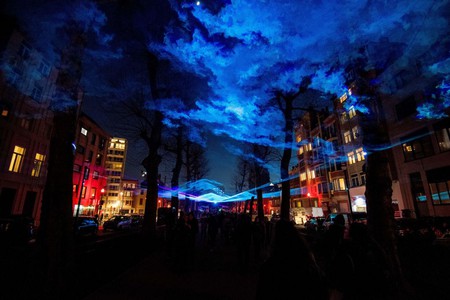 Bright Brussels: Festival of Light is a series of installations and projections scattered across the city to create a dazzling night walk with a bit of a twist | © Japser Jacobs / Getty Images

Bright’s unusual routes take its cue from the festival’s origins, dreamt up as a way to build interest in the Port of Brussels’ 20th anniversary in 2013. To draw in more families, the authorities came up with the Brussels Light Festival (now Bright). 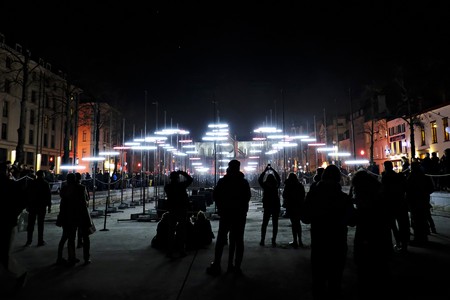 The canal area was never the city’s most appealing enclave, but when the inaugural 2015 festival wound its way along the waterside of the Northern Quarter between Sainctelette and Place des Armes, its projections of dancing elephants and boat-sized sparklers invited visitors to view it with a new, whimsical gaze.

It even offered something of a premonition of what was to come. Since then, this part of the city has changed beyond recognition – even as it awaits the arrival of the Kanal-Centre Pompidou gallery that, when finished in 2023, will be the largest cultural centre in Brussels. This is what makes Bright so fascinating: it’s an invitation to explore another side of Brussels as well as see some of its artists at play. 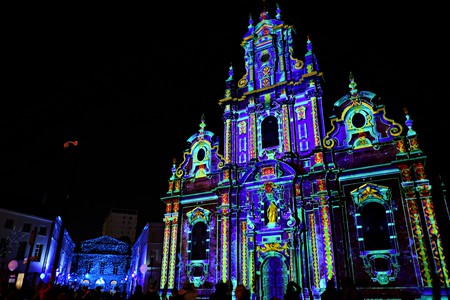 In the years that followed, Bright became an annual event, morphing into a kind of nighttime scavenger hunt of darting in and out of churches, art galleries and medieval squares for a glimpse of the fantastical. In 2018, the festival wove a trail through the city’s old Beguinage quarter, linking the leafy streets around Quartier des Quais and Place Sainte-Catherine. Along the way, projections were hurled across its landmarks, dousing every Gothic crevice – even the imposing Church of St John the Baptist – in an invitation to look again at a history and architecture all too easily taken for granted.

Later editions of the Bright festival have placed emphasis on exploration and interactivity. The 2019 edition’s trail linked up the Beguinage and Canal walks and introduced free guided tours offering background on the installations as well as the area. These fill up quickly, though, so most visitors still just grab a map and make their own way around. The 2020 edition even added an opening-day ‘cycle parade’, inviting visitors to form part of a giant display. Anyone is invited to turn up at the Marché aux Herbes (the starting point) with a bike, strap on a light or two and pedal to a dozen installations, from the technicolour-lit façades of the Sablon to the majesty of the Royal Quarter. Bright has even inspired a similar, smaller event in the district of Schaerbeek: the Citizen Lights Festival. This has more of a neighbourhood vibe with puppet shows, light installations and a parade. 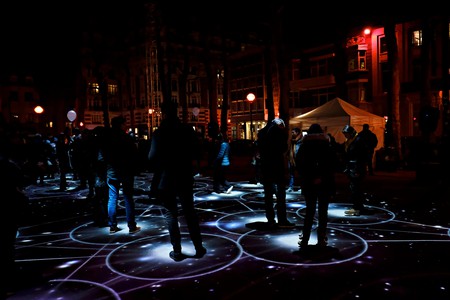 The art of the matter

Of course, the heart of Bright is still the artwork itself. In 2020, the route goes from Sainte-Catherine to Halle Gate, where after a 169-step climb, visitors can gaze out through VR ‘binoculars’ to see the city as it was in medieval times. All the while, Pieter Breugel the Elder’s winter scenes are splashed across the building’s exterior below. It doesn’t end there. Along the way, you can stand in a Monet painting at Galerie Horta, witness a ballet of fishlike lanterns swim overhead at Parc du Mont des Arts and stare at Meke Vrienten’s remarkable light sculpture made from everyday objects in the Marolles, best known by visitors for its daily flea markets.

Whimsy, history, art and skill combine to light up a route that takes you through a city transformed through imagination. That’s the fun of Bright: it makes you look again at the ordinary and familiar, imploring you to see it for what it actually is – remarkable.

The city’s winter festival tends to kick off around the start of December with the annual Grand Place Sound and Light Show, a 360-degree light projection that ripples across the façades of the old guild halls. It’s repeated throughout the evening (Sunday–Saturday) from 5pm, so you’re unlikely to miss out.

Something of an offshoot from the Bright festivals, in 2017 the town of Schaerbeek launched its own version, which usually takes place in February. Its parade, which marches from the Brusilia building to Place Colignon, is worth exploring, with its giant walking puppets and elaborate light costumes.

During the height of summer (July to August), in the shadow of the Atomium, the sky over Laeken explodes in spectacular firework displays through a series of Friday-evening shows. Expect to hear the tunes of live music, wild themes, games and plenty of food stalls to kickstart the evening. This is also where the city’s New Year’s firework display typically takes place on 31 December.