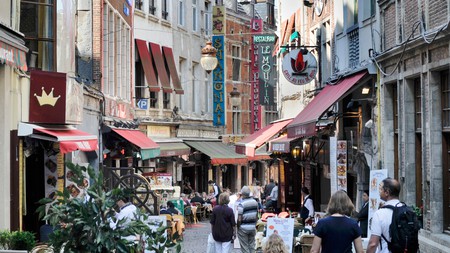 More and more people want to know not just what’s on their plate but how it got there – and it’s no different in Brussels. It’s not enough that restaurants here have vegan, vegetarian or organic menus – diners are increasingly looking for places that serve good, sustainable food and have a stake in their local community.

Non-profit cooperatives, restaurants trying to give those from disadvantaged backgrounds a chance, Slow Food champions and zero-waste pioneers scatter the city of Brussels, setting an example for everyone else. They’re trying to revolutionise not only what we eat but the world around them, and all they need to achieve that are hungry customers.

So, strap on your bib and your social conscience and dig in.

Sustainable food, hearty salads and fresh veg make up the backbone of this endearing restaurant. It opened back in 2012 and works closely with its local organic suppliers to minimise waste. For example, leftovers are taken to feed local hens or given to its vegetable producers to make compost. Sustainable food workshops take place here too, while its adjoining grocery store sells ‘zero-waste baskets’ calculated to provide the perfect amount of ingredients for a single recipe so there’s no surplus. Ingenious. 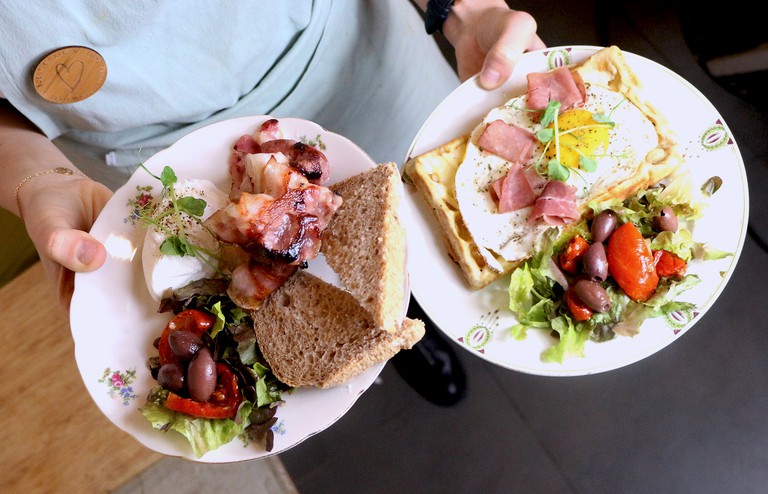 Whether repurposing its coffee grounds for a project to grow mushrooms from waste or composting everything that’s left over, Boentje claims to be the first fully zero-waste café in the capital. Metal straws, cloth napkins and drinks served in old jars (bring them back for a discount) all add to the vibe. Even the interior is made with recycled materials, while much of the organic menu (think eggy brunches and beet-heavy salads) is sourced from Brussels-based urban producers. 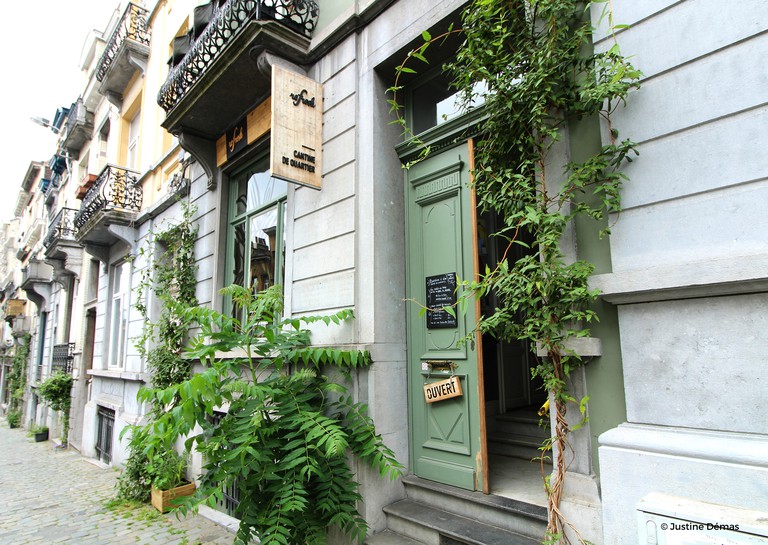 The urban garden at Refresh provides fresh produce, keeping the carbon footprint to a minimum | Courtesy of Refresh

Healthy, organic, socially conscious lunches are what’s on offer at Refresh. Ingredients come not just from organic producers and farms around Brussels but also the canteen’s urban garden and those around the city. It’s part of a social initiative that encourages and aids urban agricultural projects through volunteers – from chicken farming to tending orchards. Refresh also employs people from homeless, underprivileged or difficult backgrounds as apprentice cooks, offering a way back into society. 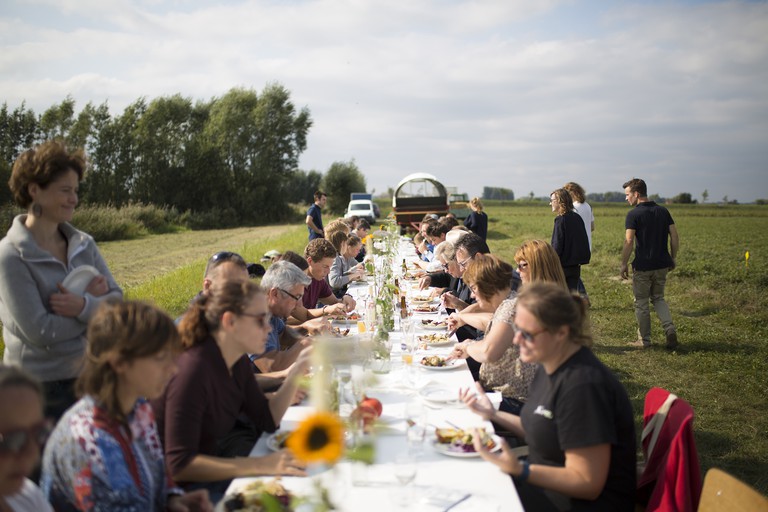 From sustainable dining in a field to challenging guest chefs to turn surplus food and by-products into a Michelin-quality meal, this is a pop-up with an imagination. Created by zero-waste NGO eatmosphere, its regular brunches run along similar sustainable lines, while its workshops teach everything from making vegan food to waste and fermentation techniques to reduce what we throw away. It’s also in the process of setting up a permanent home in the city, so look out for news on this and future events on its website.

The Slow Food farm-to-table concept has long found a willing acolyte in Pré de Chez Nous head chef Henri Depiesse, whose heaving plates and adherence to sourcing local, organic and seasonal produce are legendary. His restaurant remains an island of common sense in the touristy L’Îlot Sacré quarter, and its simple menu of threes (one meat, one fish, one veggie) boils life and dining down to the basics: fresh flavours and even fresher produce, all made even tastier knowing that it’s locally sustainable. 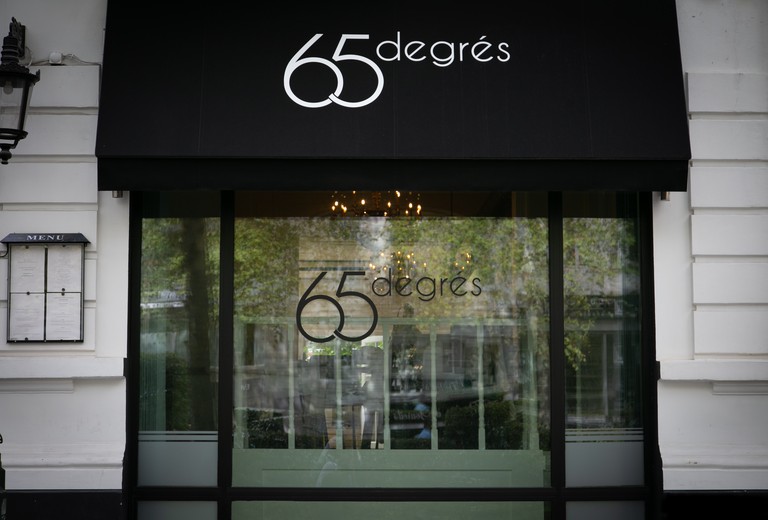 Social inclusion is a growing theme among the capital’s restaurants. At this sleek kitchen on upmarket Avenue Louise, its four owners have created not only a sensational gastronomic menu but are trying to change the way people view those with disabilities in the workplace. They wanted to show there is employment beyond shelter workshops for those with Down syndrome and on the autism spectrum, building a team of servers with disabilities to give them a chance and break down some barriers. 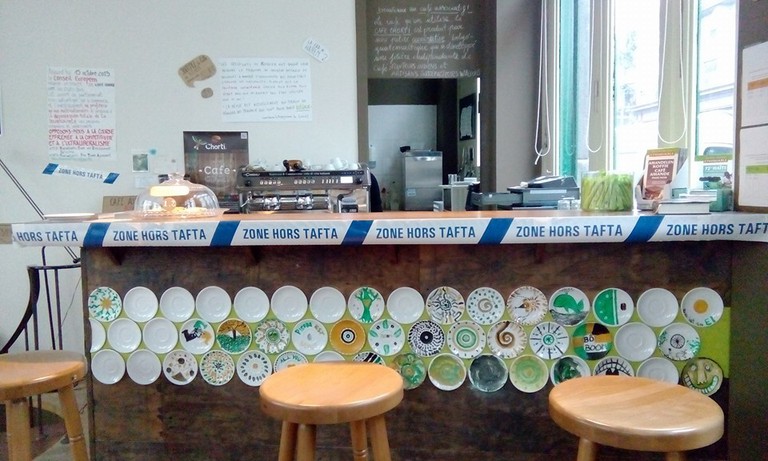 Since late 2015, Boom has been run by a small local cooperative as a Fairtrade coffee shop. It’s become a hub for those with a social conscience, with lectures and a lot of opportunities to meet small local producers and get involved in eco-projects. You’ll also find some tasty organic juices, soups and cakes, the latter two typically made from produce grown in its urban garden, which is also sold in-shop every other week.

The name of this cooperative-run vegetarian canteen, which translates to The Hot Water dates back to a time when locals in the Marolles area used to buy their boiling water here. These days, its volunteers lash up bargain lunches (think coconut curries and chilli sin carnes) using as many local, organic producers as possible, not to mention offering a fine array of artisanal brews. That’s the beauty of places like this – they drive a local economy and offer everyone a place to go.