Dressing an Icon: Meet the Tailor of Manneken Pis 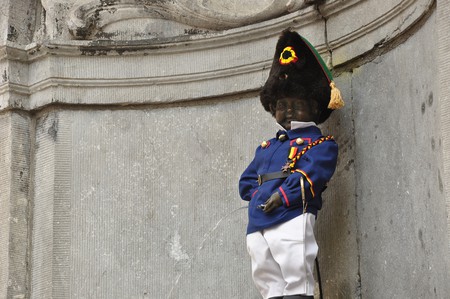 As the famous Manneken Pis in Brussels celebrates its 400th anniversary, meet the only person in the world who is allowed to dress the famous peeing fountain.

“What shall I wear?” is not a question faced by many statues. Some might find their head crowned with a traffic cone after a boisterous Friday night, or they might be spray-painted as a protest. But Manneken Pis in Brussels is different. The capital’s iconic fountain has a wardrobe stuffed with over 1,050 outfits, each commissioned, ordered and donated by benefactors from across the globe, ranging from actors and kings to charities and nations. 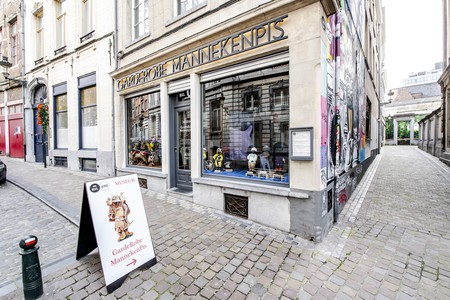 The famous statue even has its own clothes shop | © E.Danhier for GardeRobe MannekenPis

It’s a tradition that dates back hundreds of years, and such is the constant influx of costumes that, since the 18th century, the statue has required its own official dresser. Even back then, as many as four new costumes a year were being donated. But only one person in the world is allowed to garb the Manneken Pis – and he has the shiny black jacket to prove it.

Nicholas Edelman took over the role of official dresser permanently in 2014, becoming the 13th person to hold the role since it was created in an official act passed in 1755. But with over 130 events each year and a job that requires at least a 20-minute explanation at parties, the life of an official dresser is not always straightforward.

“I love my job,” Nicholas beams as we meet in the GardeRobe MannekenPis, a purpose-built costume museum on Rue du Chêne that feels rather like a walk-in wardrobe. Shelf after shelf of tiny outfits surround us – Elvis Manneken Pis, Dracula, Mickey Mouse, Nelson Mandela (twice!), astronaut, footballer, any national dress you care to imagine and even a large woollen condom outfit. For one brief moment, I worry this is what madness feels like. 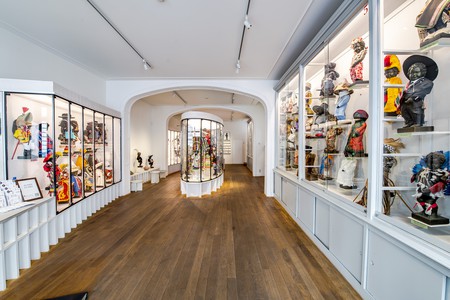 Some of the thousands of Manneken Pis outfits can be seen in the Garderobe | © E.Danhier for GardeRobe MannekenPis

No one really knows when this strange tradition began. Records of the Manneken Pis statue, which celebrated its 400th anniversary in 2019, describe the loose-bladdered cherub being clothed as early as the 1600s. But the oldest-surviving proof of this dates from over a century later.

By then, the continent had been thrown into chaos by the War of Austrian Succession. France’s Louis XV threw his regal bulk behind unseating the Habsburgs, and in 1746 his troops waltzed into Brussels after a month-long siege. They looted the city, even heisting its beloved Manneken Pis, and that’s when their troubles began. 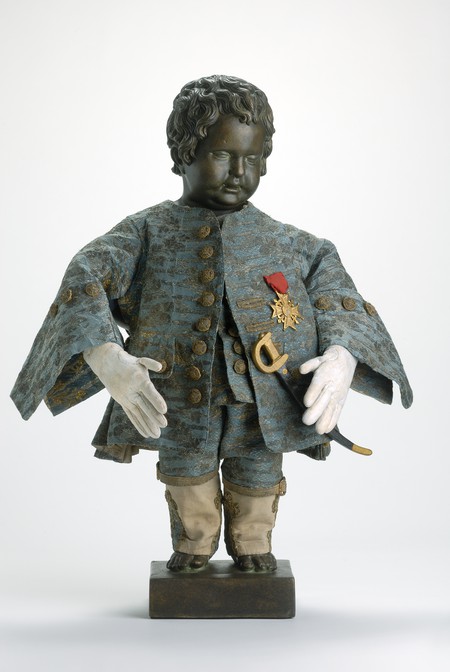 The citizens, exhausted, deemed it the final straw, and as tensions rumbled towards revolt, the king relented, hunted down the culprits and returned the statue – but with one added extra.

“It’s a replica,” Nicholas reminds me as I gaze at a copy of the gentlemanly outfit gifted by the French king. It certainly befits the era: tricorn hat, stately brocade, gaudy medal. The original has deteriorated so much that it can’t be displayed anymore and resides in the City Museum along with the other 950 outfits that can’t be squeezed into the GardeRobe. But it’s a fine reminder of how a tiny statue once forced a king to back down.

Dressing for the occasion

These days, gifting an outfit doesn’t require an army or a regal mea culpa. Yet the role of the dresser is more than just valet to a statue.

“For a costume given by a country, it’s impossible to just offer a costume. You must first ask the embassy to contact the City of Brussels,” Nicholas explains. “After the formalities are over, I ask the mayor’s office for authorisation, and if everything is OK, I send out the dimensions to make the costume and set a date for the official ceremony at the City Hall.”

Approval is granted only if the costume has no political, commercial or religious purpose, but many organisations also use them to raise awareness. The following day, Opération Thermos, which supports those sleeping rough, had agreed to re-show its outfit as temperatures outside plummeted. Others, such as the unforgettable condom costume – a swollen woollen prophylaxis that, even Nicolas admits, “looks like a cross between Homer Simpson and a fish” – was originally created to raise awareness about World AIDS Day. 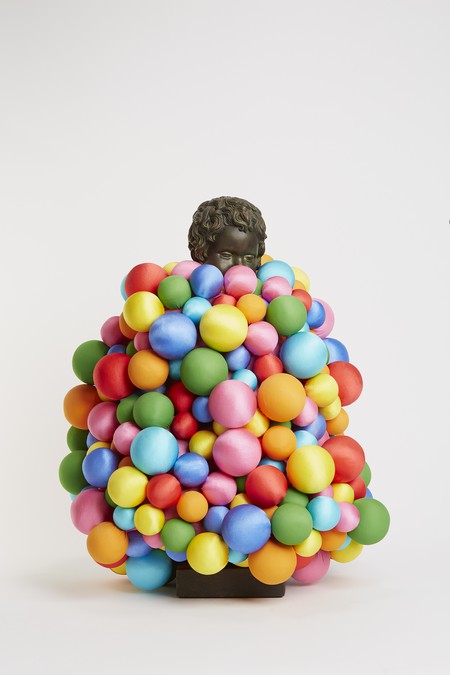 Costumes must have no political or commercial purpose | © E. Laurent for GardeRobe MannekenPis

They’re not easy designs to make, either. A pipe in the back of the statue requires some dextrous stitching, and Nicholas giddily recounts the time that French designer Jean Paul Gaultier arrived to hand over the outfit he’d designed for Gay Pride.

“I presented myself to him and he looked worried. ‘I’m glad to meet you,’ he said, ‘as I’m afraid that if I have to dress it by myself, I don’t know what to do with all the water and the pee.’ I said, don’t worry, I’m here.”

Despite the eccentricity of his role, Nicholas is a rather quiet character – albeit not immune to bouts of boyish enthusiasm. At one point he fires up a big grin and flashes me the back of his jacket. On it, the words ‘Official Dresser’ underline the unmistakable image of the Manneken himself. 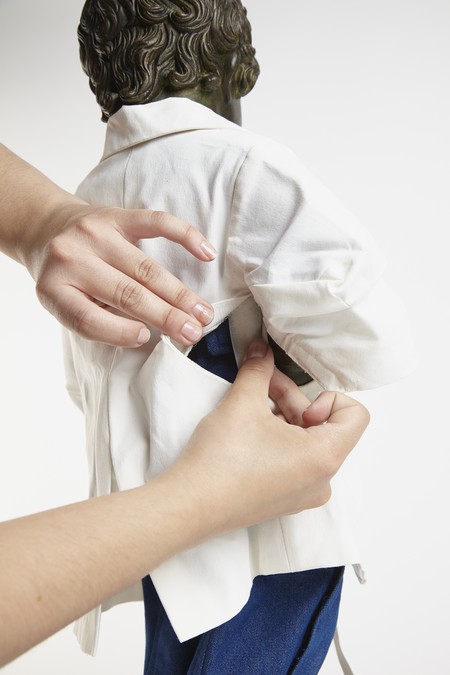 Nicholas Edelman is the 13th person to hold the role of dresser since it was created in an official act passed in 1755 | © E. Laurent for GardeRobe MannekenPis

But he wasn’t always such a fan. “I didn’t know a lot about the Manneken Pis before this job. It was not my dream,” he admits. “But I love my role.”

Before this, he worked as a cook for the City of Brussels but grew tired of his routine and wrote to the city alderman to ask about administrative vacancies. They found him a role in the Department of Culture, working on folkloric events, and he fell into it from there.

The role of official dresser is usually officially appointed, but Nicholas volunteered for the role, originally working alongside the previous incumbent. But these days it’s all him, and with 130 events a year, many at weekends, it’s enough to keep anyone busy. It even thrusts him into the public eye once in a while. How does this most esoteric of roles go down socially?

“One day I was invited to the birthday of a friend,” he recalls. “There were a lot of people. They didn’t know me, so we discussed jobs and I told them I’m the official dresser of the Manneken Pis. They asked a lot of questions, and after 20 minutes I thought to myself: I just talked about me. I don’t know what they do.”

Brussels loves its famous statue; of that there’s no doubt, and plans to mark its 400th anniversary with a winter party in the Grand Place were ramping up. What might the little fella be wearing for the big occasion? After all, 400 is the new 300.

Nicholas smiles. “It’s a surprise,” he tells us. Even a statue has to have some secrets.