Constant Montald: A Master Of Monumental Art In Belgium

Have you ever noticed the huge blue and gold paintings in the entrance hall of the Royal Museum of Fine Arts in Brussels? Those monumental paintings – Le Bateau de l’Idéal and La Fontaine de l’Inspiration – were created by Constant Montald, a Belgian symbolist painter. Culture Trip delves into the life of the artist and the great works that represent his artistic style.

The emergence of an artist

Montald was born into a working class family in the mid-19th century. At the age of 12, while studying decorative art at a technical school, he enrolled in night classes at the Fine Arts Academy of Ghent–his home town. 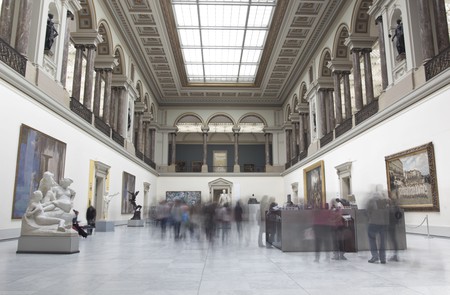 In 1886 he won the Rome Prize: an award given to a talented artist every year at the time. Soon after, he traveled to Italy, a trip which greatly inspired him. Of all his experiences he had in Italy, his visit of the San Marco Basilica was one that had the most impact. He was struck by the combination of gold and color in the huge ceiling mosaics.

Inspired by this, he painted Le Bateau de l’Idéal (The Boat of Ideal) and La Fontaine de l’Inspiration (The Fountain of Inspiration), the two paintings exhibited in the entrance hall of the Royal Museums of Fine Arts of Brussels. In fact, Montald painted The Fountain of Inspiration specifically for that hall. The size of this painting (3.9 m by 4.9 m) hints at Montald’s love for monumental art. To work on such large pieces, Montald needed a lot of space. He dreamt of a studio in which he could paint large canvases at his ease. 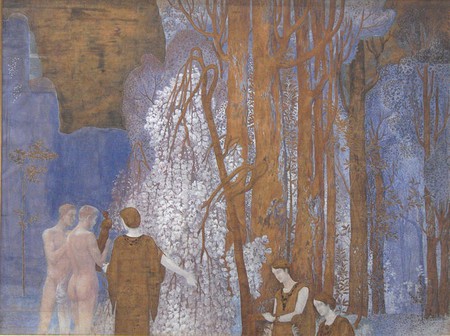 During a long walk with his close friend Emile Verhaeren, Montald stumbled upon a lovely piece of land along the Chaussée de Roodebeek in Woluwe-Saint-Lambert, a commune in Brussels. At the time, what is now the residential neighborhood of Woluwe-Saint-Lambert was still countryside. Montald fell in love with the beautiful views that could be seen in the area. He bought the plot of land and on it, built the Villa Montald. The house was inaugurated in 1909 and became a gathering place for artists and writers such as Emile Verhaeren, one of Belgium’s greatest authors, and Stefan Zweig, a renown Austrian writer. 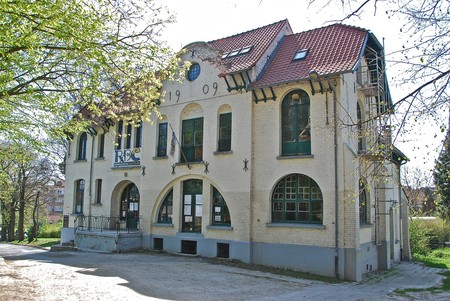 During World War I, Montald was forced to stop creating large-scale paintings. The commissions he usually received were decorative pieces for the rich bourgeois. When turmoil struck Europe, art became a luxury item no one could afford. At this time, Montald resorted to smaller formats and concentrated on subjects found around his Woluwe home: landscapes and nature. 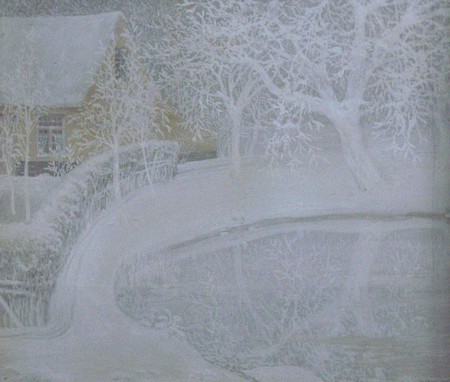 The return of monumental art

A couple of years after the end of the war, Montald co-founded the Société de l’Art Monumental (Society of Monumental Art). Its main aim was to make art accessible to everyone by decorating public buildings. The group’s most notable works are the mosaics in the outdoor galleries that span out from the Cinquantenaire‘s central arches. 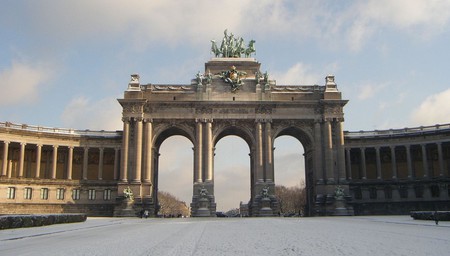 Montald’s designs are in the left-hand wing of the building. This particular series of mosaics addresses the theme of peaceful Belgium. Within this theme, Montald’s six panels specifically represent moral life. The other panels, drawn by Émile Vloors and Émile Fabry, symbolize intellectual and material life. Some of Montald’s other monumental projects include a mosaic decorating the Theatre of Leuven and mural decorations in the now-destroyed Maison du Peuple of Brussels.

Not only has Montald left his mark on important buildings throughout the kingdom, he also influenced the generation of artists that was to come after him. Becoming professor at the Academy of Fine Arts of Brussels in 1896, some of his students included the soon-to-be leaders of the surrealist movement in Belgium, Paul Delvaux and René Magritte.