It is a hot, high midsummer day in Willebroek, Belgium, but an air of atrocity hangs low over the National Memorial Fort Breendonk. In the calcium white icicles that cling to the ceiling and the dark, dank stench of death and abomination. Walking down the corridors of cell and torture, Breendonk is not a place to capture the imagination; it is fuel for daytime nightmares. 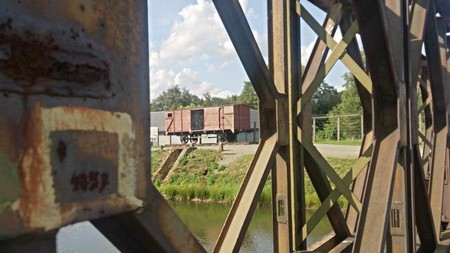 A Bridge Over The Breendonk Moat | © Rory McInnes-Gibbons

The nightmares of over 3,500 prisoners incarcerated within the fortress between September 1940 and 1945. Sitting around 20 km from Antwerp and 25 km from Brussels, Breendonk was originally intended as a key cog in a chain of defenses around the Port of Antwerp and the River Schelde. Besieged in World War One, the buildings were occupied in the Second World War and underwent a Nazi transformation.

Before 1942, Breendonk, a concentration camp under commandant Philip Schmitt, housed a largely Jewish population. With the advent of the Kazerne-Dossin barracks, a rail transit point from Mechelen to Auschwitz, the Jewish inmates were deported and political dissidents from the left imprisoned. These included intelligentsia – artists and journalists – but, also, dissidents and rebels drawn from professions as diverse as law to baking. Of the 17 nationalities recorded in Breendonk, the largest three were 264 Polish, 115 French and 94 from the USSR. Over half of those incarcerated died in the camp or elsewhere, en route eastwards to camps within Germany, Netherlands or Austria.

Philip Schmitt is the living link between these two inhuman evils. As the SS overlord of both Kazerne-Dossin and Breendonk, he had the ultimate authority over the organization and supervision of slaughter. Dismissed in 1943 for extortion and black marketeering, Schmitt was sentenced to death in the Antwerp Trial on November 29th, 1949. Unrepentant, he was the final criminal executed in Belgium before the abolishment of capital punishment, shot dead by firing squad in Hoboken, Antwerp. 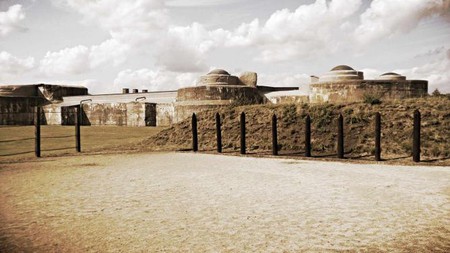 Schmitt, often photographed with his Alsatian Lump – ‘thug,’ in English – was a war criminal condemned to death for complicity in the death of 83 victims. Breendonk grants the haunting opportunity to walk in the footsteps of those executed within the facility. The gallows and noose sit in the corner of the Fort’s south side. These are modest symbols of horror. They just exist. There is no fanfare, no last post. The ghost of past torment is a silent witness. A plaque for those executed adorns the wall. Flowers divide the line of timber that stands in place of gravestones. The final view for blindfolded eyes. Their stories must continue to be seen.

While Schmitt was the smart, uniformed face of the SS’s particular doctrine of planned, premeditated and perfected evil, his underlings included both Germans and Nazi sympathizers drawn from the local Flemish population. The notions of cooperation, collaboration and coercion are unifying themes between Kazerne-Dossin and the Breendonk Fort. Both now memorials, they maintain a relevant, present focus through the significance placed on the human questions that arose from occupation. 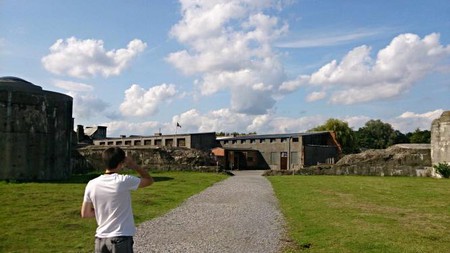 The End of the Outdoor Tour | © Rory McInnes-Gibbons

While Kazerne-Dossin presents the Belgians’ involvement in the identification and deportation of Jews, often through individual informants, Breendonk offers an equally complex moral question under not only the force of occupiers, but of incarceration. It is an intensely pressured environment: visitors walk through rooms within hearing distance of the open doors to a specially modified torture chamber, adapted by the SS as an extension to the fort, the scene of unimaginable agonies. Chains, a metal pole. The light flickers. Within these harrowing confines, a setting of suffering emerges in which both positive and negative experiences coexist.

Stories vary cell to cell. The inmates of Room 6 represent the disintegration of class and hierarchy into bonds of brotherhood and universal solidarity against a single enemy: the forces of fascism. Of whatever creed, whatever profession, the occupants fight their daily battle for survival. Their struggle not one of ideology but of the collective harmony of human existence.

On the opposite end were those who turned away from solidarity and upon their fellows. Savage beatings and abuse gave kudos under the watchful gaze of the camp’s superiors. The most savage were the most feared and a pair of Flemish SS men rose to notoriety. The names of Fernand Wyss and Richard de Bodt were two of the worst. 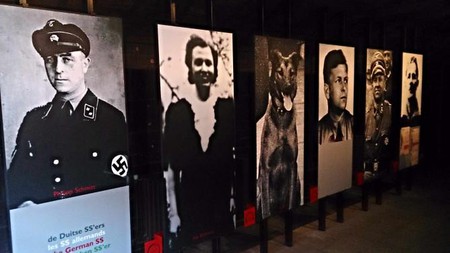 Faces of the German SS include Schmitt’s wife, a US citizen who chose a Nazi path | © Rory McInnes-Gibbons

A gallery of images from the archive of the camp staff forms an effective exhibit in the central courtyard office where prisoners were registered. Walking into the recognizably temporary building that could be a red brick, corrugated iron structure in almost any of Europe’s POW camps, the life-size images loom out of darkened walls. To the left are the Germans, led by Schmitt; to the right, the Belgians, chiefly Wyss. These were the faces that haunted the lives of the imprisoned. Now each is locked into a single, unmovable frame. The prison of a photo. History to be told. Their threat in life diminished. The black and white graves of war criminals.

The excellent audioguide – a must for anglophones due to the Dutch/French info points – is included in the €10 entrance for adults (€9 for students). A memorial since 1947, which – considering it was incomplete as a fort in 1914 – makes Breendonk’s life as a memorial already twice as long as a commissioned military facility. Over time, it has developed into a streamlined and overwhelmingly informative experience that can take a scholar of history up to three hours. But its special feature is that the whole Fort is the memorial, giving a visitor the chance to interact directly with Breendonk’s past through the architecture of its atrocity.