The Delicious History Of Belgian Fries

How to annoy a Belgian: ask them about French fries. Chances are you’ll get an annoyed look while they correct you – it’s Belgian fries. These deep-fried potato snacks have a rich history and are rooted deep within Belgian culture. Here’s a handy, quick guide on where they come from and just how important they are.

Belgians take their food very seriously – especially their fries. The real Belgian frietjes or pommes frites are thickly cut and quickly fried twice, with some cooling time in between. This makes the fries crunchy on the outside, while they remain soft on the inside. Better yet, they’re not as greasy as thinly cut fries that are baked once at a longer duration. However, this does not necessarily mean Belgian fries are healthy. The traditional frites are baked in animal fat, but a growing number of Belgians opt for vegetable fat. Fries are also typically eaten with a savoury kind of mayonnaise. Don’t worry if you don’t like mayonnaise – a great assortment of sauces are available at any frituur or friterie, as well as a wide variety of meats and other snacks. Fry shacks and restaurants are easy to find, as fries are about the best loved kind of fast food in Belgium. Keep walking in a straight line and you’ll bump into one sooner or later. Fries are famously served in a paper cone by food trucks and frietkoten, but more often than not they are served in a more practical plastic or paper box. While in Brussels, visitors should try the local fast food invention – fries in a sandwich, called a mitraillette. 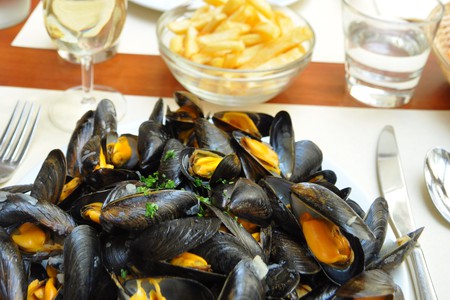 Stromae shouted it during his concert in New York – ‘They’re not French fries, they’re Belgian fries!’ There are various theories about the confusion regarding these deep fried delicacies. One theory states that various American and British soldiers in Belgium during the First World War thought they were in France. When they came in contact with the fried potatoes, they called them ‘French’ fries. Another theory is a linguistic one – ‘to french’ means ‘to cut thinly’. So the name might not even refer to the country of origin at all, but to the way the fries are cut. It’s also possible that fries were linked to France in the American-English language because the country was introduced to pomme frites through French cooks in the 19th century. To date, neither Belgium nor France were able to prove whether fries originated in their own country. The idea that fries were first eaten among Belgian fishermen as early as 1781 is unlikely — poor fishermen probably didn’t have such big rations of fat to cook their food in. While it’s true that Parisian street vendors sold fried potatoes in 1789, this doesn’t conclude that the delicacy was actually invented within the country. And so the culinary discussion continues. Whether fries truly originated in Belgium or not, they are still an important part of Belgian cuisine. Moules-frites, steak-frites… about every national Belgian dish is served with fries on the side. 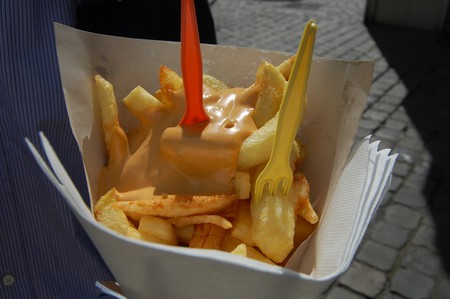 The fact that fries are important to the Belgians, is reflected in the songs and art they produce. From Stromae’s Moules-frites to Marcel Broodthaers‘ famous art piece ‘De Grote Mosselpot’ — Belgians aren’t afraid to put their national dishes on display. Artist Gilles Houben loves to paint fry shacks and there’s a ‘Frietkot Museum’ in Antwerp, as well as a ‘Frite Museum’ in Brussels. Several cities have a vocation center where future fry vendors can practice their craft – the classes are often overbooked. When Belgium was without a government in 2011, fries were said to be the only thing that kept the country together. It is without question that fries are essential to Belgian culture, and will be passionately defended.