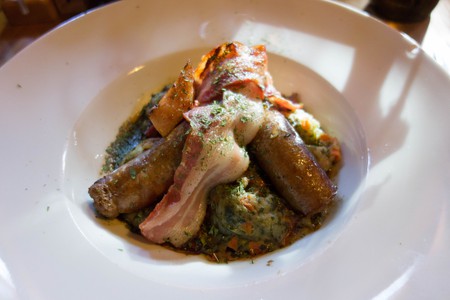 Belgians know that fall has arrived when they start craving their nation's ultimate comfort food: a steaming plate of hearty stoemp | © Kent Wang/Flickr

A staple of Belgian wintertime cuisine all over the country, stoemp is a potato dish so soothing that the phrase ‘comfort food’ almost seems invented for it. We take a closer look at this popular cuisine.

Hailing from Brussels since the 19th century and made with the ingredients harvested by humble potato farmers, you’d be hard-pressed to find a dish more quintessentially Belgian than stoemp – or ‘stomp,’ as it’s pronounced in its typical Brabantian dialect. The blunt qualities of its name fit the honest meal to a tee as it’s made by simply throwing every wintry vegetable imaginable in with a heap of pureed potatoes and roughly mixing them up. Frequently used ingredients include Brussels sprouts, carrots, onions, endive, turnip greens, leeks, celery, and any kind of kale that can be found. Stoemp is a tailor-made solution for a fridge full of leftovers.

Its best friends – in charge of upping the comfort levels even more – are sausage, fried bacon, or meatballs that sizzle on top of the steaming heap of mash. From time to time, stoemp even gets accompanied by a good piece of steak or tenderloin if the chef is feeling particularly fancy. Another beloved variant is wortelstoemp, a simplified version in which other vegetables are left out, and the carrots are left to shine center stage, possibly with some onion thrown in too. Like in every good mash, butter and eggs are often added to make the lot heartier still. The potatoes can be sifted to make the meal smoother, though that would take away some of stoemp’s signature rugged charm.

Travelers and lovers of the simple and honest kitchen will recognize the dish straightaway as a close relative to Irish colcannon, Scottish Rumbledethumps, and English bubble and squeak. Quirky names aside, stoemp has another thing in common with its cousins across the pond: they all originated in countries known to have a large number of gloomy days. Just like its family members, stoemp is deemed to be real pub food, there to provide solace after a long day of rainy clouds that just wouldn’t disappear. It’s no surprise that while many chefs have welcomed a high-end version of stoemp into their kitchens, some of the best classic preparations can still be found in the cafés of Brussels’ old working-class Marollen district.