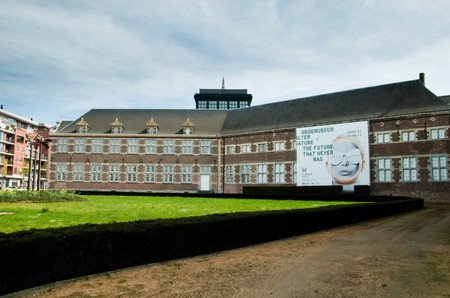 While Antwerp is usually deemed as the fashion capital of Belgium, some might not be aware that within the Flemish province of Limburg lies a special museum dedicated to the history of fashion and its socio-cultural connection to the area. The Fashion Museum of Hasselt (or in Dutch, Modemuseum Hasselt) possesses more than 15,000 items including clothes, shoes, and accessories from 1750 until the present, spanning from unique, haute couture pieces to ready to wear clothes.

It’s no coincidence this Fashion Museum lies in the city of Hasselt. At the beginning of the 14th century, the trade of weaving, and cloth weaving in particular, was an important part of Hasselt’s economy. Towards the end of this century, it gained even more importance due to weavers fleeing the city of Leuven because of political issues.

The cloth in Hasselt was known to be of high-quality and impeccable finish, and it was sold in several big Belgian, Dutch, and German cities. During the 15th century, one out of five habitants of Hasselt actually worked in the cloth industry. After WWII, the fashion and textile business grew strongly, and it attracted many buyers from Belgium, the Netherlands, and Germany.

The building which houses the Fashion Museum also holds a strong historical connection dating back to the 17th century. Constructed in 1664, the building first served as a convent where the ‘Grauwzusters’ resided. During the French regime, these nuns were forced to leave the convent around 1797, and the building turned into a prison, and later into barracks. Almost ten years later, the building was used as a civil hospital again, and in 1818 the nuns returned to work here.

During the 20th century, the hospital was forced to move to a new location because of the damage WWII caused and the building’s faulty infrastructure. The old convent was empty again and first housed several other museums, such as the ‘Jenever Museum’ and Town Museum, until 1987 – the year in which the Fashion Museum of Hasselt took its residence in the building.

In the early 1990s, the fashion museum closed for two years due to renovation and redecoration, but it has been permanently open since 1995. The museum itself has come to be recognized as a significant place that is symbolic of Belgium’s unique relationship to fashion.

THE SHOW AS CEREMONY “Some shows will always be remembered for their skill of conveying the emotion through a mix of elements that go beyond the garment itself…” For more, read Haute-à-Porter by Filep Motwary, published by Lannoo. Release date April 1st 2016. #theshowasceremony #book #hauteaporter #filepmotwary #lannoo #modemuseumhasselt @modemuseum_hasselt @hauteaporter_official @the_kinsky Photo: Rick Owens FallWinter 2012-2013, photography by Kevin Tachman ©

The Fashion Museum of Hasselt provides an opportunity to connect the region’s unique socio-cultural history to the fashion world. With a collection totaling more than 15,000 pieces, the museum’s collection contains ready to wear clothes, but also haute couture pieces.

The museum also owns several unique creations by famous Belgian designers, such as Raf Simons, Martin Margiela, and Dirk Bikkembergs, all originally from the province of Limburg. The fashion museum has presented many exhibitions, not only related to fashion, but also to the city of Hasselt, religious art, and jewelry.

Some of the many subjects of the expositions have been: Chinese and Russian fashion, Barbie and her relation to fashion, traditional Flemish clothing, jeans, and the relation between religion and fashion. It was also the only Fashion Museum on the European continent that showed the exposition of British fashion designer Paul Smith in 2015, called Hello, my name is Paul Smith.

Its most recent past exhibition showcased the Roaring Twenties and showed beautiful pieces of Coco Chanel, Jean Patou, and other designers from the 1920s, as well as modern pieces of Prada and Etro inspired by the era, complete with video fragments and more context to help understand the origins of this fashion.

Currently, the Fashion Museum presents Haute-à-porter, an exhibition zooming in on the relation and mutual influence between haute couture and prêt-à-porter, or ready to wear clothing.

While the Fashion Museum of Hasselt might not be as widely known as other Belgian fashion museums, it has developed a significant platform that is recognized for its contribution to the fashion world within Belgium and beyond.