Belgian Breweries You Should Visit, Part 2 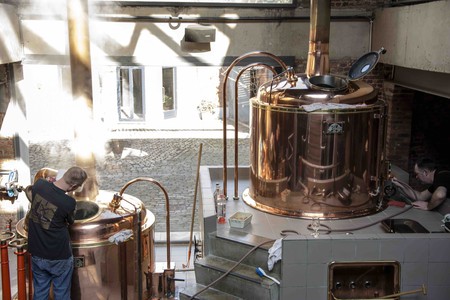 Some are closed to the public, others only offer tours for groups, and a lot are tucked away somewhere in the countryside; visiting the Belgian breweries that are hailed for producing some of the world’s best beers can be tricky. Let us help you out by introducing you to five must-visit breweries in our two-part series dedicated to Belgian beer craftsmanship. 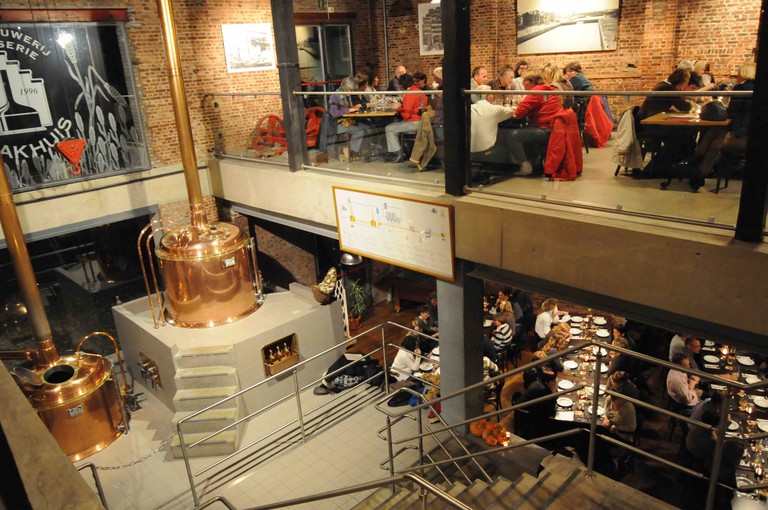 't Pahuis opened up its brewing process for the world to see when they placed their shiny copper vats in the middle of a grand industrial bar | Courtesy of 't Pakhuis
‘t Pakhuis is a city brewery in one of Antwerp’s hippest neighborhoods: ‘t Zuid. Surrounded by photography and fashion museums, an art cinema and the cultural hub of Zuiderpershuis, it’s easy to include a brewery tour in your exploration of the fashionable area. One of only two remaining places where beer is made in the port city alongside De Koninck – featured in part one of this series – the massive brewery is located on the Flemish Quai, known as the beer quai in olden days because of the amount of ships that left here with hectoliters of beer aboard. Though the docks have been closed since 1967, ‘t Pakhuis prides itself on the history attached to its neighborhood. They still brew their beer in the authentic way, shunning filtrage and pasteurization in making their Antwerp Blond, Antwerp Brown and resident bestseller, Nen Bangelijken. Even if you don’t have enough time to take the tour, you can be immersed in the brewer culture right in their restaurant and bar, from where the copper vats can be admired perfectly. Group tours are possible after reservation from Monday to Sunday. Entry: €125 for groups of 10 people or less + €6 for each extra person (three tastings included)
Open In Google Maps
76 Vlaamsekaai, Antwerpen, Vlaanderen, 2000, Belgium
+3232923193
Visit Website
Give us feedback 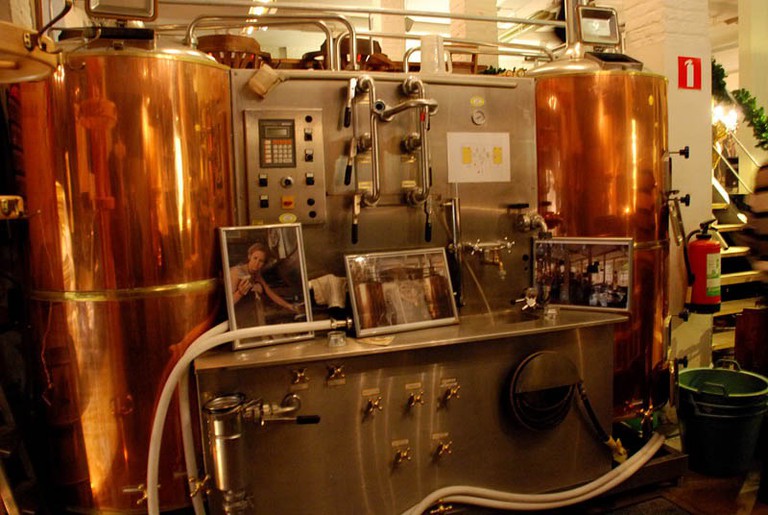 A part of the Gruut brewery installation, smack dab in the middle of its bar and eatery | © Dirk van Esbroeck/Wikimedia Commons
Taking the experience of enjoying a brewski in the place where the magic happens even further is Gruut, a couple of minutes outside the center of Ghent. The pub/microbrewery mixes its tables in with shining vats containing five different Gruut beers ready to be tasted on site. The enterprise tries to keep things as local as possible, with typical Ghent dishes such as Waterzooi and delicacies such as Breydel ham on the menu. Gruut is an extremely accommodating place with a formula in mind for any type of visitor, whether you want a simple brewery tour, or would like to add a beer walk through Ghent or even a boat trip on the city’s charming canals. Open from Monday to Saturday, 11am – 6pm and Sundays, 2pm – 6pm Entry: €9-€10 per person for a regular tour (including three tasters)
Open In Google Maps
1 Rembert Dodoensdreef, Gent, Vlaanderen, 9000, Belgium
+3292690269
Visit Website
Give us feedback 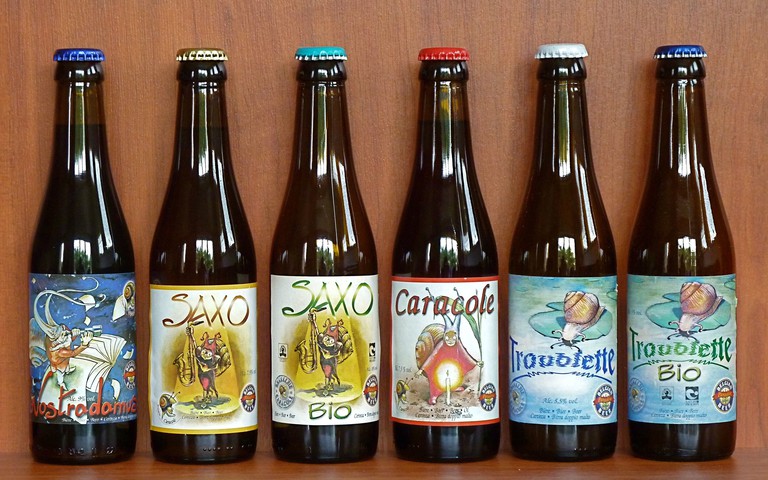 The beers of the old-fashioned Caracole Brewery, all hand labeled with various designs featuring their signature slug mascot (caracole in French) | Denkhenk/Wikimedia Commons
Quite the opposite of a buzzing city brewery, Carocole in the peaceful Falmignoul area close to Dinant has picked a snail, or ‘caracole,’ as its emblem. On a visit you’ll notice that life has a tendency to slow down in Dinant, and its general province Namur, hence the traditional brewery’s name. Extra special to Caracole’s brewing approach is their use of authentic wood-fired ovens to heat up the kettles. The brewery’s five specialty beers include the strong blonde La Caracole and heavy brown Nostradamus and you can count on each bottle being hand labelled. Entry: €6 (includes tasters) Open to individuals on Saturdays and Sundays, 2pm – 7pm. Groups of 25 people or more can make a reservation for a tour during the week. Last visits start at 5pm.
Open In Google Maps
86 Côte Marie-Thérèse, Falmignoul Dinant, Wallonie, 5500, Belgium
+3282744080
Visit Website
Give us feedback

If you’ll be drinking one strong beer while in Belgium, chances are it will be a Duvel. The golden pale ale served in a tulip-shaped glass is a staple of the tiny country’s beer culture, having cultivated a loyal following. Founder Jan-Leonard Moortgat and his two sons made real waves with their small family brewery in Breendonk when they introduced a distinctive beer with a subtle, bitter aftertaste after WWI. During a taste test the village’s shoemaker, impressed by the ale’s mighty aromas, supposedly said: ‘This is a real devil.’ With that, the beer’s name was a fact and in 1923 ‘Duvel’ (devil in Flemish dialect) started conquering Belgian beer lovers’ hearts.

Particularly pleasant about their grand-scale brewery – run by the fourth generation of Moortgats – is the choice between three different tours. Complete amateurs in the world of beer walk a different path to connoisseurs, who have no trouble distinguishing their malts from their hops. 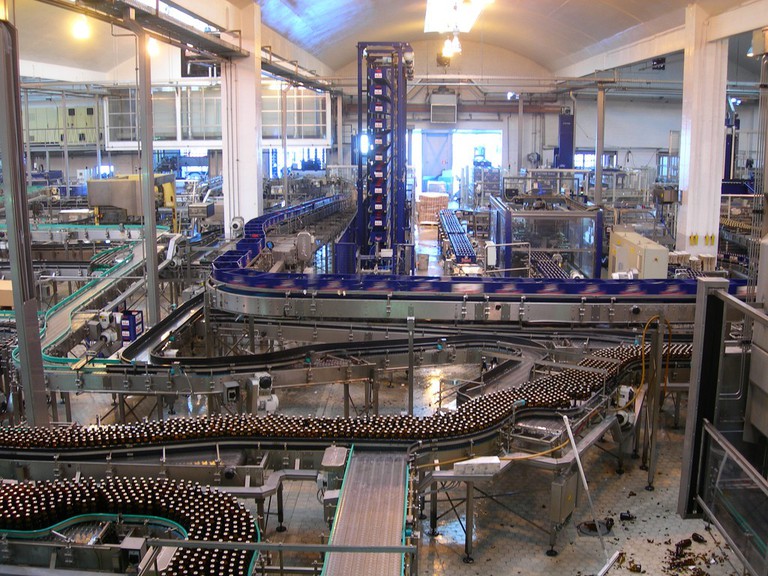 The Duvel assembly line, testament to the success of the Moortgat family’s brewing prowess | ©Jim/Flickr

Not exactly a brewery but a place symbolizing just how ingrained beer is in Belgian culture, the Brewer’s House is home to the Union of Belgian Brewers, uniting all of the breweries in the country. Their pick for a headquarters couldn’t be more fitting as the richly decorated house called ‘the Golden Tree’ on Brussels’ historic Grand-Place has been home to the Brewer’s Guild since the end of the 16th century. Its vaulted basements have been turned into a brewer’s museum with traditional equipment from the 18th century on display to keep the legacy alive.

Individual visits or planned group visits (a minimum of 10 people) from Monday to Sunday, 10pm – 5pm 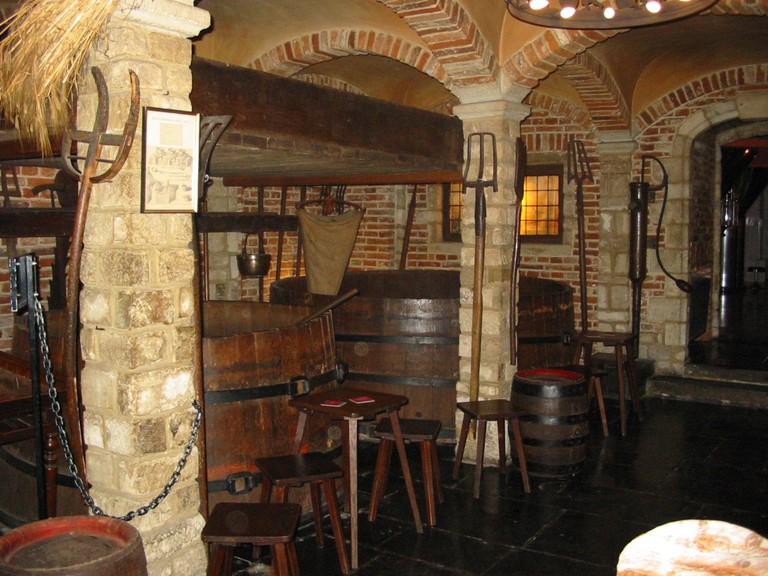