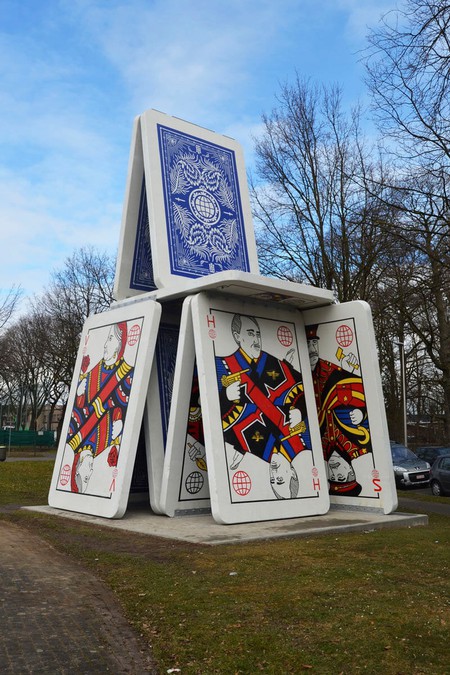 Weighing in at a colossal 60,000kg, Belgian artist, Tom Herck’s concrete sculpture in his hometown of Sint-Truiden, Belgium subverts the fragility of a structure built out of playing cards into a monumental statement on Western history and cultural beliefs.

Tom Herck has been part of the ‘unauthorized’ graffiti scene since his late teens. He’s painted in major European capitals as well as New York. Now he’s started to embark on a new direction in his artistic practice, which stems from the satisfaction he gets from creating installations. In 2009 he transformed a former fast-food building into a church with a 9-metre-high mural, ‘You can put a lot of creativity into a mural, but for me, at least, even more in an installation,’ the artist tells me.

Last year, Herck installed his epic work, The Decline in Sint Truiden, Belgium. His largest work to date, made from nine concrete playing cards, the sculptural form is a dominating epilogue to historical figures who have left an indelible mark on our cultural landscape. 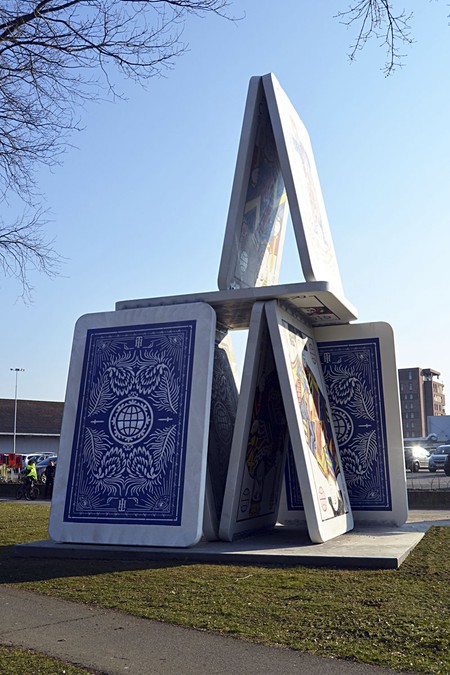 Culture Trip: What inspired you to make The Decline?

Tom Herck: After painting murals for more than 15 years I wanted to go to the next level. I’ve always been a fan of satire in art, things that actually make you think, without being too cheesy, things that take balls to create without thinking too much of the public opinion and put the finger on the wound in society. Because I’m keen on metaphors, I like the metaphor of a House of Cards, which can collapse any moment. So I built an installation made from concrete murals, each weighing 7,300kg, which is as big as a house. 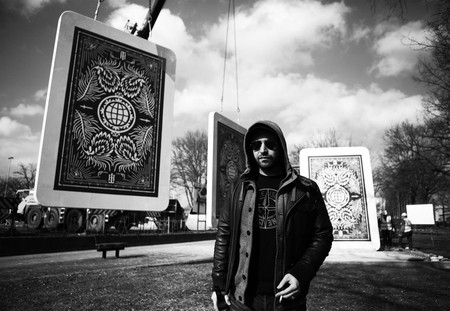 Portrait of Tom Herck with The Decline, 2016 | Courtesy the artist

CT: How did you choose which historical figures to portray?

TH: My mother sadly died this year and I was cleaning up her apartment where I spent my childhood. I found some old boxes filled with a collection of magazines that were mine. I had a subscription when I was nine that I had asked my mother to set up for a history magazine that was actually meant for adults. I went through them and saw these characters like Stalin, Hitler, Napoleon, Suleiman, Nero, Alexander the Great and so on and I remembered that I used to be extremely fascinated by them as a child. 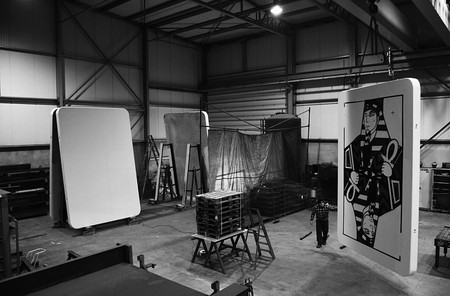 In the studio making The Decline, 2016 | Courtesy Tom Herck

Now, bearing in mind this discovery came after I realised the project, I recognise my interest in history, world leaders and regimes are rooted in my DNA. You can see them a lot in my paintings and installations. There is always a tension around these characters, which is why I love to play with them.

I initially wrote down 20 names from history I thought were important for Western society. For me this was important because of the location of the work. If it had been somewhere else I would have chosen relevant historical figures for that particular place.

I eventually decided upon portraying Ramses II, Julius Caesar, Suleiman I, Queen Victoria, Charlemagne, Hitler and Jesus Christ. I have characters who are male, female, white, North African, Middle Eastern, Christian, Orthodox and Muslim, not because I want to be politically correct but because it is visually more interesting. 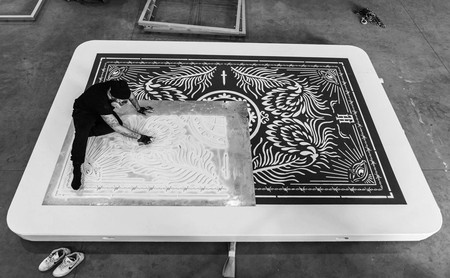 In the studio making The Decline, 2016 | Courtesy Tom Herck

CT: Is this the largest piece you’ve ever made?

TH: It’s the heaviest. I’ve painted 18-metre high murals before and I’m going to be painting a F-104 Star Fighter Plane and, if all goes to plan, next year I’ll make a 30-metre wooden ship for a Land Art project. 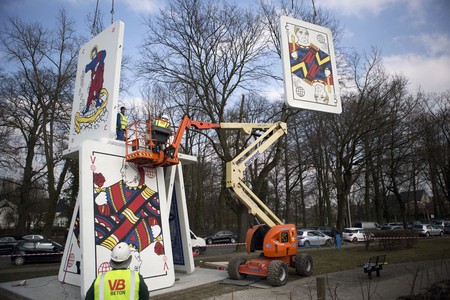 CT: What do you want the public to take away from the work?

TH: I’m conscious that some of my works can offend people because of the subjects I work with, like religion and history that is close to people’s heart. But I don’t do things to shock. Of course you have some role as an artist to break barriers and let people see things in another way.

When the work was installed there was a lot of controversy around it. The city’s mayor censored the work by putting a plastic banner over the Hitler card. People went wild and ripped it off at night, I’ve had a lot of support. Later I had a meeting with the mayor who knew she had acted too quickly. It reveals a lot about human nature. We try to profile ourselves as an open-minded society in the West and condemn other countries but if there is something we don’t like we try to cover it up.

It’s a nice but dangerous lesson, and that’s what the work is about. After all these decades, even millennia of fallen dictators and society we keep falling into the same trap. 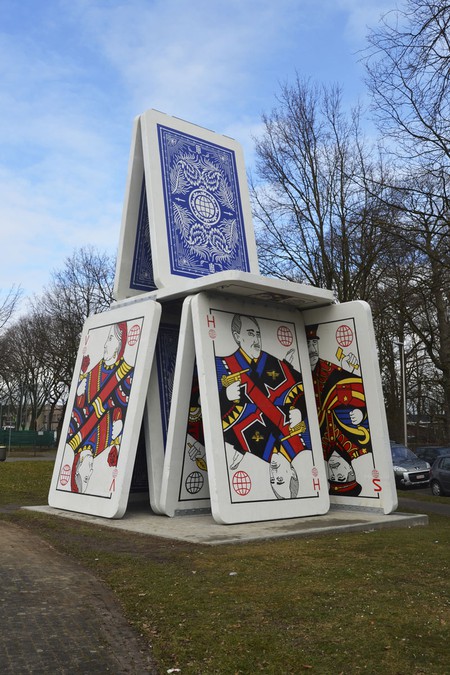 The Decline is permanently installed at Speelhoflaan, Sint-Truiden, Belgium.