An Introduction To The Flemish-Walloon Divide 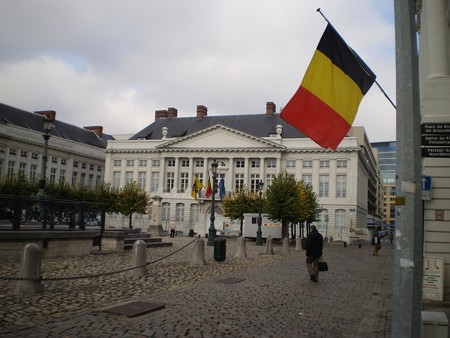 It has been going on for what seems like forever: the social tension between Belgium’s northern part, Flanders, and its southern part, Wallonia. With separate histories, separate educations, separate languages and even separate governments, it can sometimes seem like there’s no Belgium to speak of. So how did things get this far?

Much like with the Catalan independence movement in Spain, language is at the core of it all. Unlike countries that are ripped apart from within by religious or ethnic differences, Belgium’s division rests mostly upon the fact that its Walloon inhabitants mostly speak dialects of French and its Flemish inhabitants mostly speak Dutch (a slight variation also called Flemish). The reason for this is of course older than Belgium itself – the country only officially came into existence in 1830.

The language gap can actually be traced back all the way to Roman times, when a battle for influence raged between the Franks (Germans) and the Romans over Gaul (the area Belgium was originally part of). For a long time in the 4th and 5th centuries the two groups pushed up against each other at a line formed naturally by connected forests, a line that roughly corresponds to the modern border between Flanders and Wallonia. When the Franks finally pushed through to take over most of Gaul, the area now described as Wallonia was already steeped in the Roman language that would later evolve into French.

Skipping ahead a century or twelve to 1830, the year the tiny country of Belgium would claim its independence after being occupied by about every large empire under the sun, a Flemish movement was already well on its way in trying to reverse the ‘enfrenchement’ of the upper classes or beau monde of Belgian society which had taken hold during the French rule in the 18th and 19th centuries. King Willem I of The Netherlands had tried to turn this around during his short 15-year rule after that, but to no avail. The Belgian bourgeoisie and clergy, all French-speaking, were quite happy to get rid of him by the time 1830 swung around. 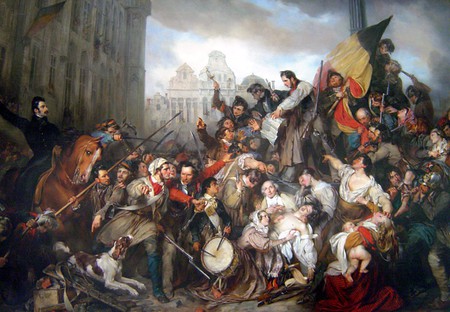 A movement had been steadily building amidst the lower Dutch-speaking classes, however, and while Belgium was originally founded with the intention of being entirely French in every aspect of government, the large masses of native Dutch speakers had had enough. Their sense of injustice, fueled by the upper echelons looking down upon their culture, the Dutch-speaking part of the population began fighting tooth and nail for equal status for their language. A big step was Dutch being recognized as a ‘state language’ alongside French two years before the 20th century rolled around, though it took a long time for reality to catch up to theory.

Lacking representation in government for a long time, Flanders put its money on innovation and the building of new businesses after World War II. With its economic growth rapidly moving past that of Wallonia, whose mining industries were faltering, the Walloons now agreed on the creation of a language barrier over fear of being overpowered and turning Flemish. The official border, created in the early 1960s, divided the country into four parts: Flanders, Wallonia, the legally bilingual capital of Brussels, and the small region of East Cantons where German is spoken. Separate governments were created that granted more independence to all regions, with a federal government to keep Belgium united as a country. 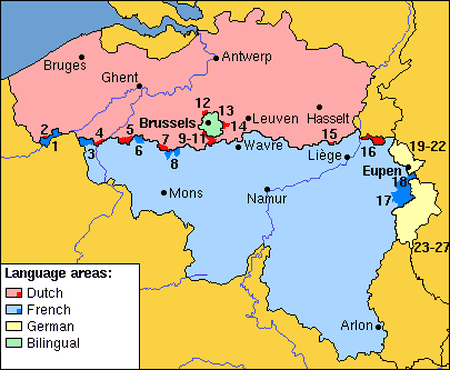 The unity is not always felt today, however, as social tensions tend to flare up every once in a while during political crises. The effects are usually felt the hardest in the cities and villages on the edge of the language barrier, such as Linkebeek and Voeren, where street signs in the undesired language sometimes get painted over with graffiti by activists. Another source of resentment and conflict is the language reality in supposedly bilingual Brussels, which is in fact French by an overwhelming majority. 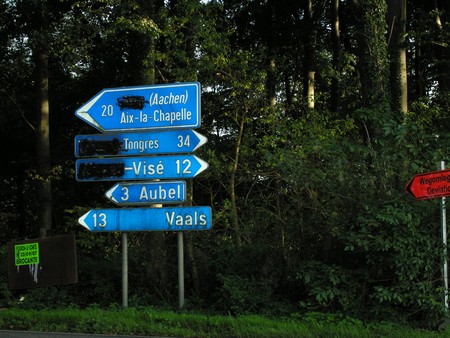 Much like a marriage in a rut, Flanders and Wallonia tend to live next to each other rather than with each other until an incident sets off the fireworks. The couple’s cultural and linguistic differences even have a few political parties in Flanders filing for divorce rather than reaching for reconciliation.