An Introduction To Oscar And The Wolf's Melancholy Electropop 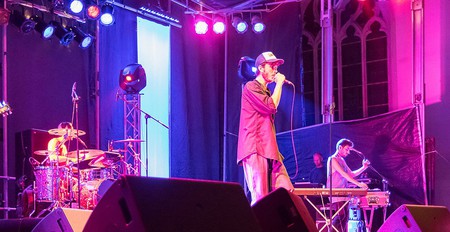 Oscar and the Wolf | © Tsungam/WikiCommons

Oscar and the Wolf – the latest electropop sensation to make waves across the Belgian borders has a name that sounds like a fairytale. When listening to frontman Max Colombie and Co’s danceable yet intimate style, a sense of magic isn’t far off.

One of the country’s most promising bands, Oscar and the Wolf broke out big in 2014 with their first full-fledged album entitled Entity. Young Belgians, in particular, fell fast and hard for the alluring mix of ephemeral tones and dynamic beats, with neighboring countries soon to follow. The band’s allure is perhaps best exemplified in the clip of ‘Princes,’ the track that first blew away Belgium with a fresh, offbeat sound and is still one of their most successful to date.

Clearly low budget yet oddly fascinating, ‘Princes’ shows off Oscar and the Wolf’s number one asset, and he isn’t named Oscar. In fact, none of the members are. More of a personal project, the band revolves around the enigmatic young man in the stark white suit. As a songwriter, vocalist and driving force all at once, it’s Max Colombie’s vision that makes it to the screen in all its surreal glory – ghostlike scooter rides and semi-levitation included.

Once familiar with Oscar and the Wolf’s recipe, you know that the first electronic grooves of every song are waiting on his deliciously filtered drawl to make them complete, just as in titular track ‘Strange Entity.’

The sultry beats aren’t the only ones begging to be made whole. ‘I lost you / I miss you / I wanna hold you,’ Colombie moans into the most danceable chorus of the album. We have no trouble believing his ‘Come Back’ plea, a line so rife with heartbreak that we’d like to comfort him ourselves.

A darker side to the identifiable longing feelings is heard in the lustful ‘You’re Mine.’ By the time the collaboration with electronic princess Raving George hits in 2015, Oscar and the Wolf’s fame levels have gone up, and so, consequentially, has the video clip budget. With a renewed production value, the otherworldliness reaches new heights.

Faces and bodies painted in geometric patterns, a surprising slinky presence and a white-haired, almost luminescent Colombie surrendering to the beat in a long robe. With his presence feeling almost godlike, it’s easy to forget that we’re watching the kid that once took part in Belgium’s preselections for Junior Eurovision. And in the end, that doesn’t matter. The musical persona Colombie has created for himself since is infinitely more intriguing, alluring, personal. The mature singer knows exactly what he’s doing as every sensuous performance of ‘Undress’ leaves live audiences flustered.

This mesmerizing onstage presence – Colombie likes to dance trancelike without ever losing piercing eye contact – has made Oscar and the Wolf a hot ticket at home as well as abroad. The big European festivals such as Hungary’s Sziget, Netherlands‘ Lowlands and Belgium’s own Rock Werchter and Pukkelpop are happy to see the immersive electropop sensation coming, and particularly, Turkey has embraced them with open arms. Their way into Turkish hearts: ‘Joaquim,’ a track that reverberates with melodious oriental strings.

It’s a sound and a style that suits our leading man, who loves a good tunic and has been praised for his sense of fashion on and off stage. Combine this with the comfort Oscar and the Wolf showcases when translating their more languishing bedroom songs into epic, tent-filling dance tracks and the crowds of thousands that bow at the feet of Colombie and Co.

Late 2015 treated us to another gem: ‘Black,’ an ethereal cover of Amy Winehouse’s missive of heartbreak served as the imposing soundtrack to young directors Adil el Arbi and Bilall Fallah’s feature film of the same name. Along with upcoming R&B voice Tsar B, Colombie scored the movie on Brussels gang violence with signature melancholy, making us ache to see what’s next for ‘Oscar’ and his wolves.