All About Belgian Beer Glasses 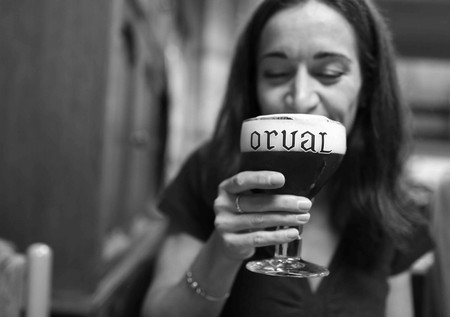 Tulips, chalices, and odd hourglass contraptions – Belgians are as inventive with their glassware as they are with their beers. Don’t you dare pour a Duvel into anything but a tulip, or drink a Trappist out of a flute. Differing glass shapes are essential in bringing out the specific characteristics and aromas of each beer, so adhering to the rules will only make your brewski tastier.

Knowing that Belgium boasts over 1000 different beers, the Herculean task of listing and explaining each particular glass that goes with them is more the kind of challenge to be met in a book rather than an article. However, this article can catch you up on the basics to make sure you’re not committing Belgian sacrilege by serving a Rochefort Trappist in a simple ribbed pint glass. Belgian cafés – knowing how particular connoisseurs can be about their glasses – always make sure to ask their customer if they’re still sure of their order when the bar doesn’t have the distinctive glass to go with it. First off in your crash course, a look at the general shapes you’ll find in every café.

Goblets and chalices are the go-to glasses for the Belgian Trappists, those beers hailed around the world and brewed in monasteries under the watchful eye of devoted monks. Chalices are usually heavy and thick-walled: firm glasses for solid beers such as dubbels, tripels, and even quadrupels. Although both are majestic and have a wide opening for deep sips, the goblet is more elegant with its long-stemmed base and thinner glass. Some of the more flamboyant ones have their mouth laced with a slim band of silver or gold. Trappists Orval, Chimay, and Westmalle all have chubby, elaborately crafted glasses. 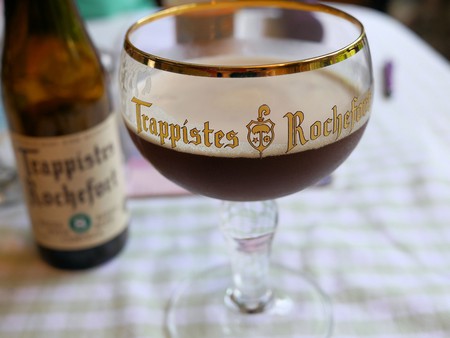 The beer glass that gives you a whiff of champagne luxury, the flute is defined by its elegant look. Beers with high carbonation levels prefer its long body for obvious reasons as they make the bubbles much more pronounced. Brewskis to be poured into a flute include the Brussels’ Gueuze, fruity Lambics, and Flanders Oud Bruin (which you might have tasted in the traditional Belgian comfort dish carbonnade flamande). 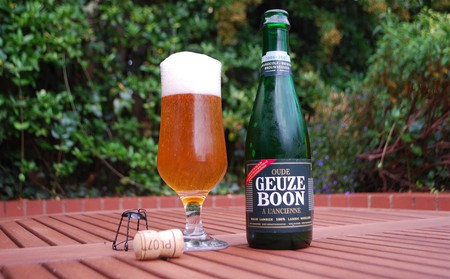 Bubbles rising up from a flute of Geuze beer | © SteveR/Flickr

Named after the flower for obvious reasons, the tulip has a bulbous body before narrowing and then opening up again to make room for the beer’s head. This kind of glass is excellent for beers that taste best when a voluminous foam is created. Examples of popular beers served in tulips are Tripel Karmeliet, Duvel, and the leprechaun-adorned La Chouffe. 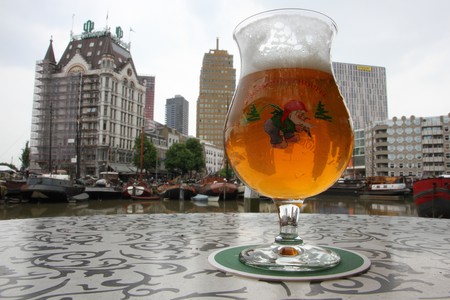 With these three kinds of glasses in your cupboard – along with the simpler café glasses for a ‘pils’ or ‘pintje’ – you at least have your bases covered as most Belgian beers can be served in one of these glasses just fine. However, Belgian brands usually consider it their prerogative to create a distinctive glass for many of their beers to whittle the tasting experience down to perfection. Some of them look mightily impressive, others mightily bizarre, and a lot of them say something about the Belgian love for a good folk tale, the following oddities included.

The story of how the hourglass-shaped Kwak glass with a wooden holder came to be is probably the most amusing of all Belgian beer glass origin stories. Legend goes that, during Napoleon times when coaches were the preferred mode of transportation between cities, a certain innholder by the name of Pauwel Kwak took pity on the coachmen who weren’t allowed to come in for a drink along with their well-off clientele because they had to watch their luggage and the horses. Kwak, somewhat of an amateur brewer, designed a glass with a wooden holder that the driver could fasten to the carriage so he too could enjoy a delicious Kwak brewski while steering. 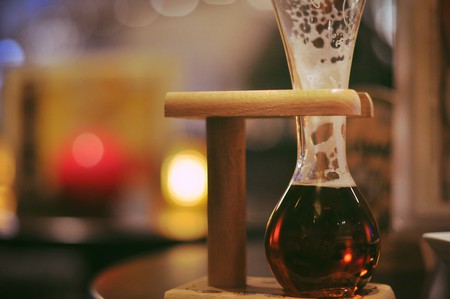 It is said that, when you take your last sip of Kwak, the sound ‘kwak’ will escape if you’re not careful enough, after which you’ll find the contents of your glass in your lap instead of your belly | © Darren Sweeney/Flickr

Shaped like a dragon egg that rests on a rocky underground, the glass accompanying the Gulden Draak beer was inspired by the gilded dragon sculpture balancing atop Ghent’s Belfort. A freedom symbol and source of local pride, the local brewery Van Steenberge chose the imposing icon to represent the equally imposing taste of their heavy beer, resulting in one of Belgium’s most ornate glasses.

The name of this beer and horn-shaped glass originates from a black page in Belgian history. All the way back in the 17th century, about a hundred villagers were hanged in a horn-shaped part of the forest of Anlier during the Thirty Year’s War by Eastern-European soldiers who mistakingly thought they were in France. The legend of Cornélius, put forth by Brasserie d’Elby, says that there was a legendary brewer of an extraordinary beer in the victims’ midst, who buried his recipe underneath an old oak tree right before being captured. Today, La Corne du Bois des Pendus boasts three variants that are poured into a horn-shaped glass with a wooden holder. 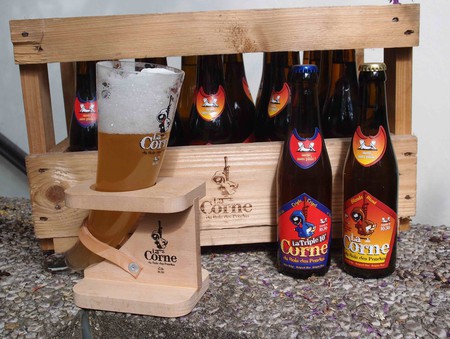 An ensemble of La Corne du Bois des Perdus, with trippel and blonde versions | © Gordito1869/Wikimedia Commons
Give us feedback