A Tour of Brussels' Statues and Sculptures

Its pee-pee trio aren’t the only ones brightening up the streets of Brussels with sculptural beauty and quirk. Cycling cats, cowardly lions and stumbling police officers all add to the urban fun in this tour of the capital’s most fascinating statues.

Kicking off the tour with local eccentricity is the first of five Tom Frantzen creations we’ll come across. As an avid fan of the ‘zwanze’, Frantzen has made it his life’s mission to keep this physical and slightly surreal sense of Brussels humor alive. Approaching Madame Chapeau, you’ll notice she’s casually counting her change in an area known for its pick-pockets. Move even closer and you’ll realize she’s actually a man dressed up in old lady clothes. 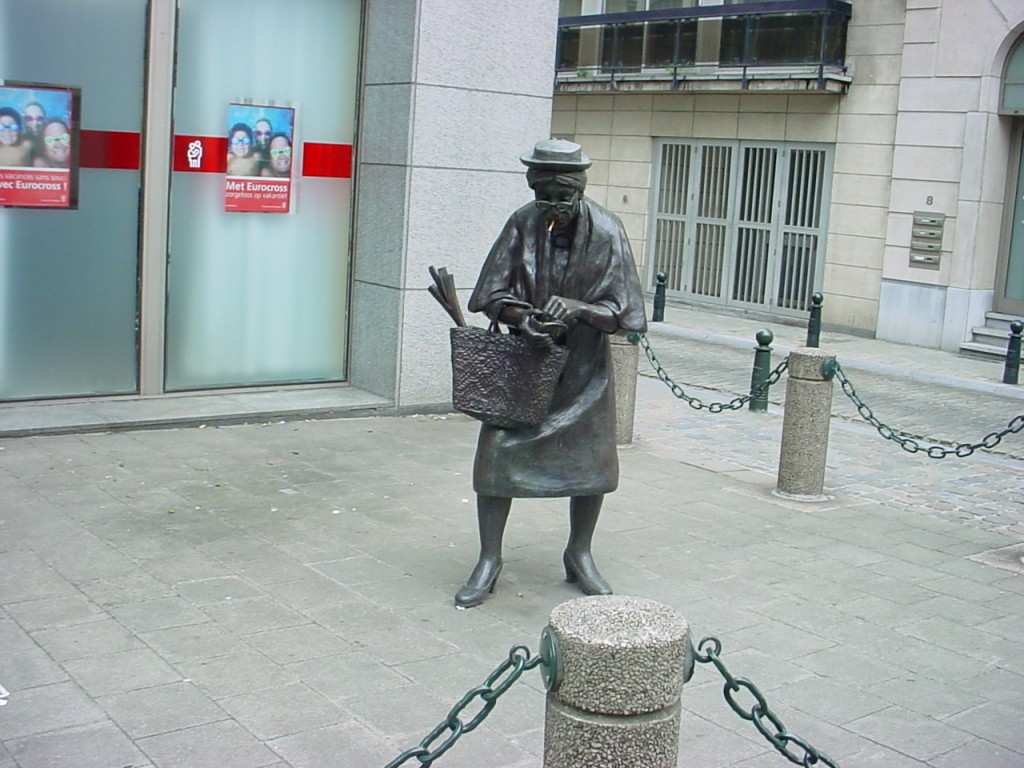 The statue humor continues a few streets down with the oldest and most famous member of Brussels’ peeing family. Never has a curly-haired cherub had such an expansive wardrobe to choose from, so chances are you’ll see him in one of over 900 outfits, ranging from fin-de-siècle dandy to masked Casanova heart-throb. 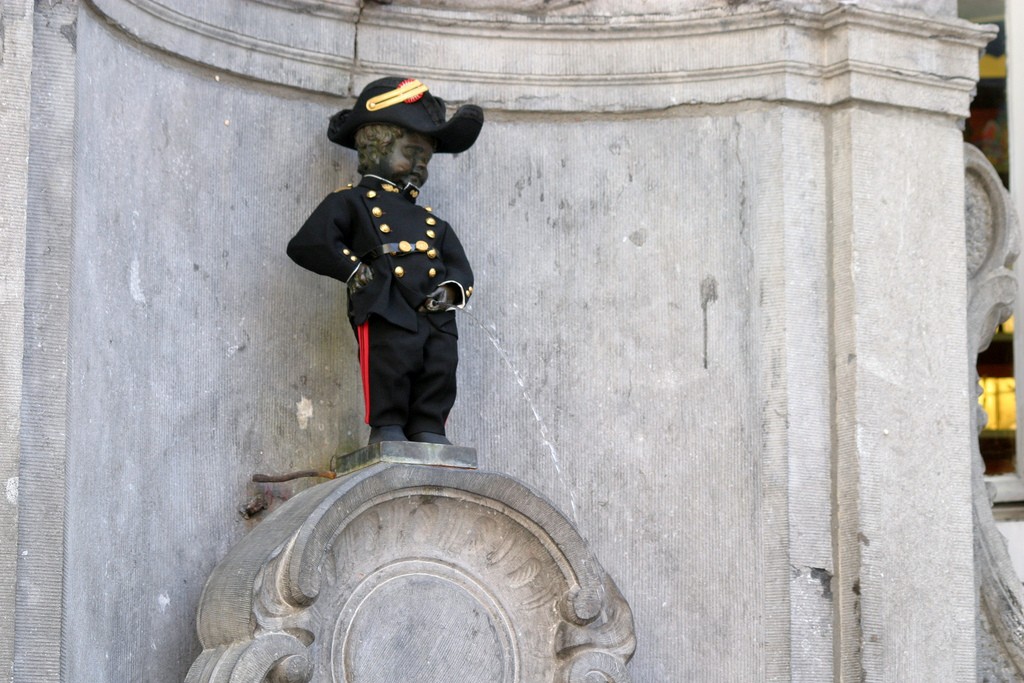 A mere three-minute walk from the Manneken you’ll find yourself at the magnificent Grand Place, where each alcove of the Gothic City Hall has a duke, duchess, or other important national historic figure watching over the UNESCO-labeled square. 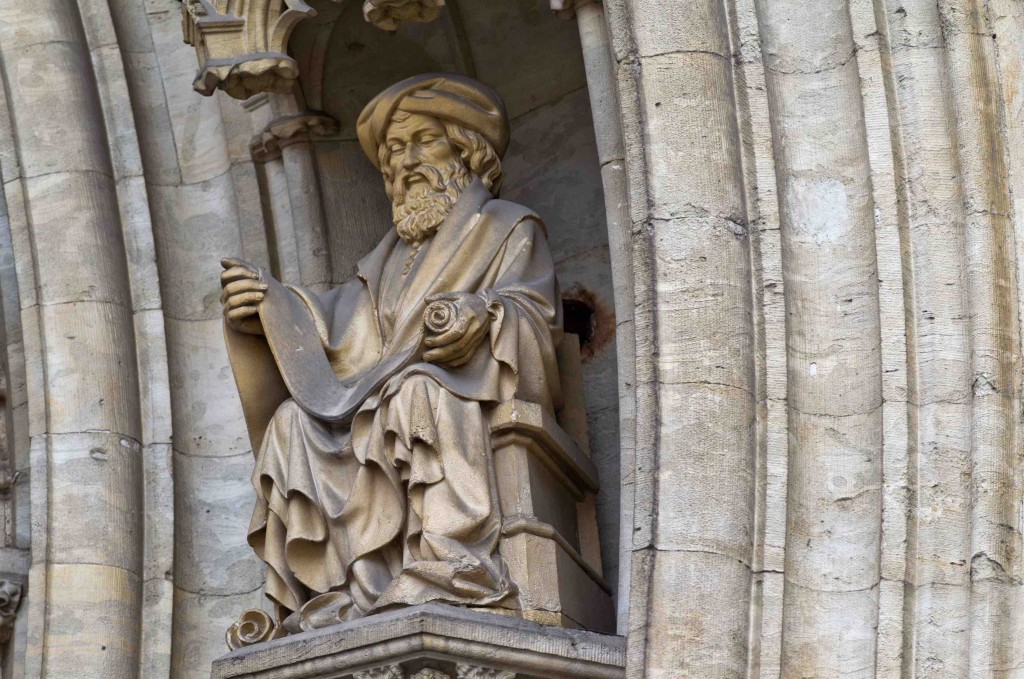 To the opposite side of the Grand Place, at the end of the saunter delight Galeries Royales Saint-Hubert, La Cycliste shows off her stuff. Alain Séchas’ cartoonish feline on a bike is a welcome splash of color connecting the grand arcades and legendary Brussels café A La Mort Subite. 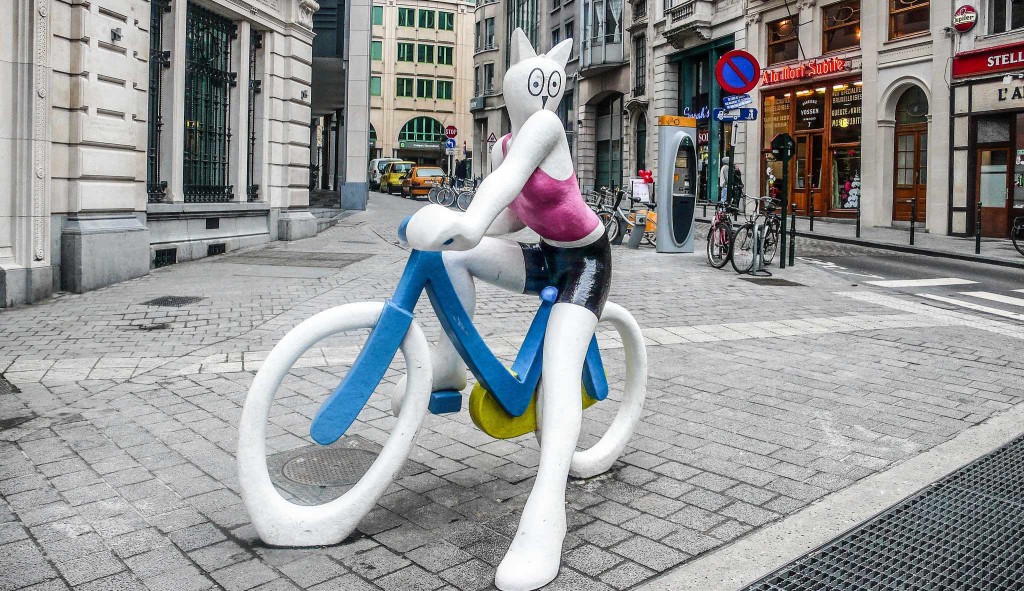 A little further on the same side of the Grand Place Manneken Pis’ sister is doing her business at the end of a blind alley. Squatting behind red bars, she’s harder to spot than her male counterpart, but no more modest. 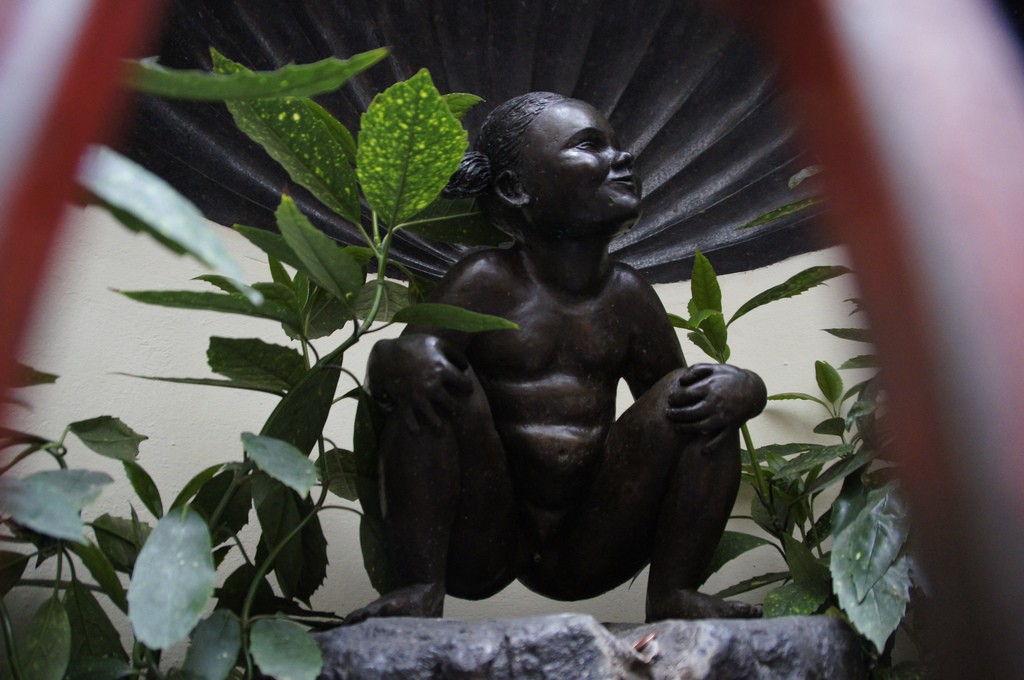 Completing the pee-pee trio is Zinneke. He’s not a fountain like his human family but is more than convincing in his role of urban pooch relieving himself against a pole thanks to Tom Frantzen’s skilled public art ways. 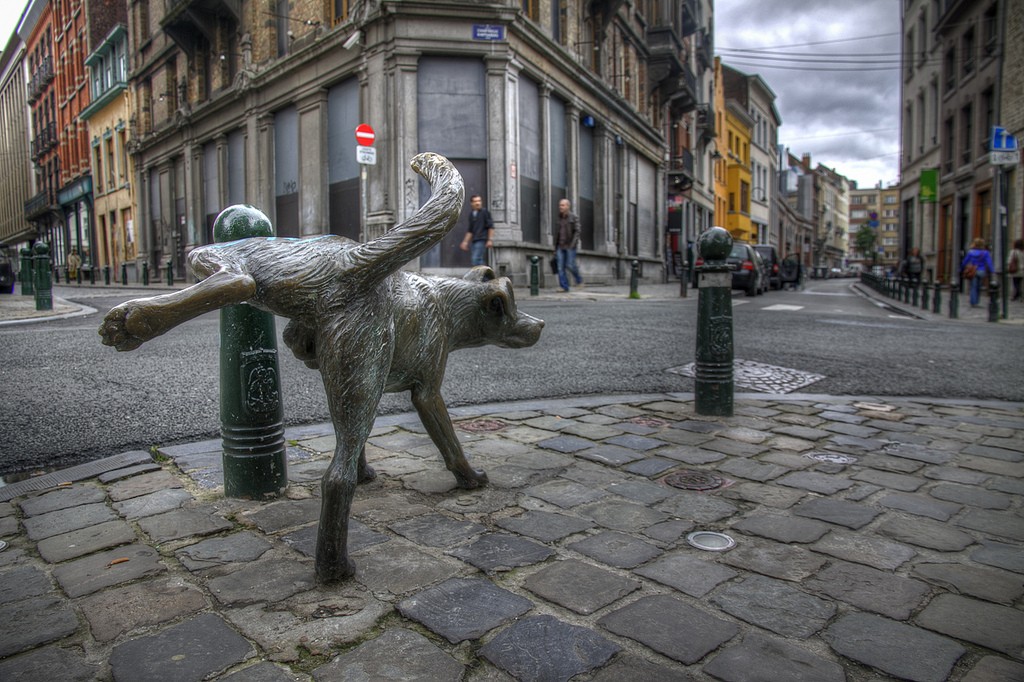 As a tiny nation that’s not unused to being overlooked, Belgium takes care to celebrate the underdog too – no matter how silly it might make them look. Hence: a monument dedicated to the pigeon soldat, the soldier pigeon that played a crucial role in the First World War (together with its fanciers, of course). 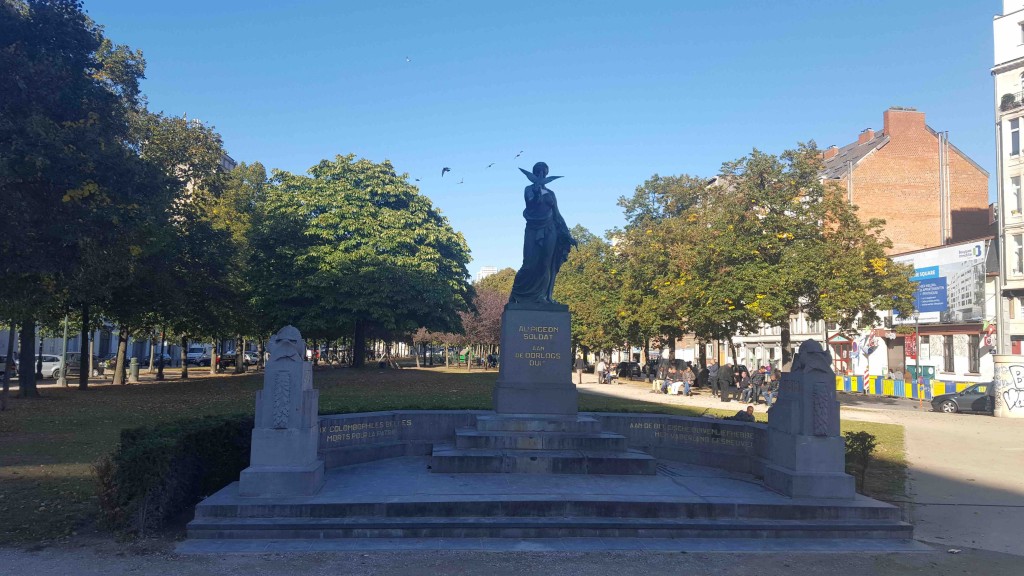 Snatched on the ankle by a so-called vaartkapoen just over the canal, poor Agent 15 goes tumbling down. The perennially down-on-his-luck cop from Hergé’s Quick and Flupke comic books is another great example of Tom Frantzen’s signature combination of slapstick and Brussels culture. 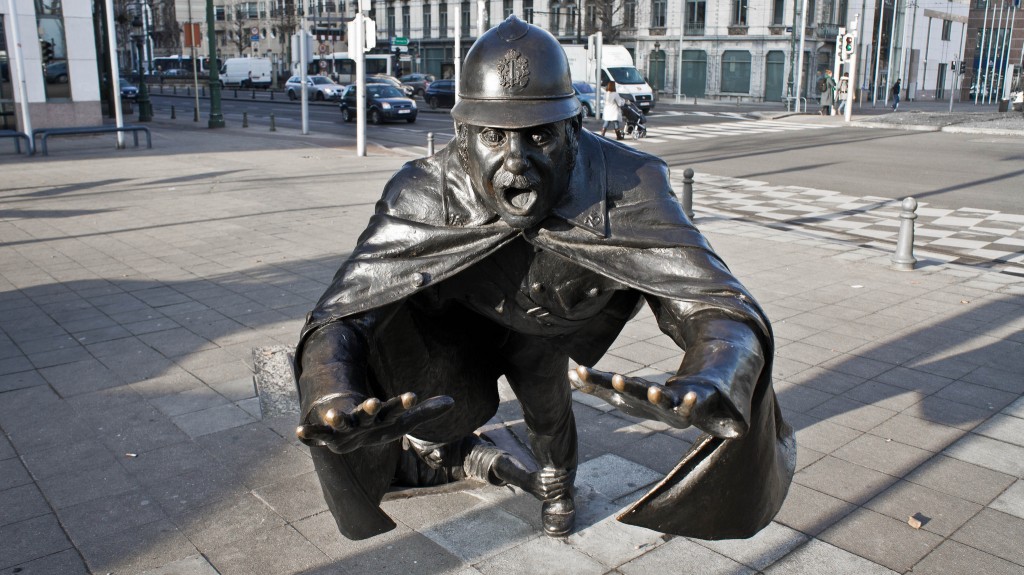 Back on the other side of the canal, an intriguing statue livens up the money district. In front of Brussels’ Finance Tower, two naked women stand embracing, intimate yet with faces turned away from each other. 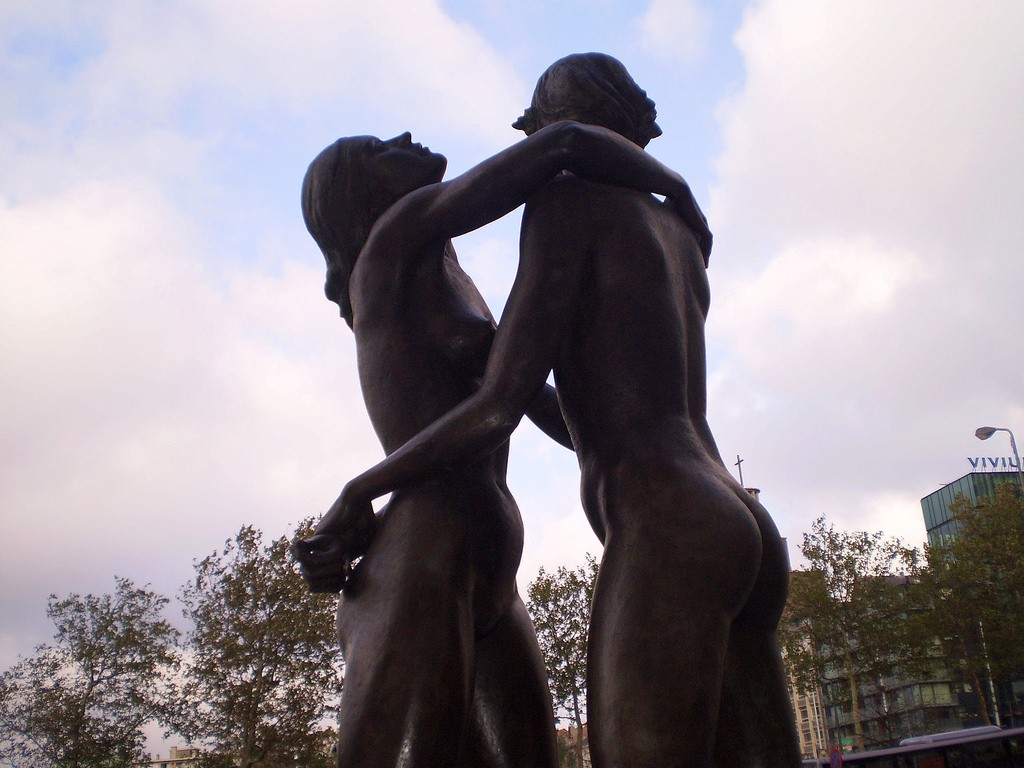 Dipping back down to the area around the Grand Place, Charles Buls and his dog are having a relaxed time in the historic center the former Brussels mayor helped preserve. Buls and his loyal companion are regularly joined by locals and tourists alike for a photo opportunity. 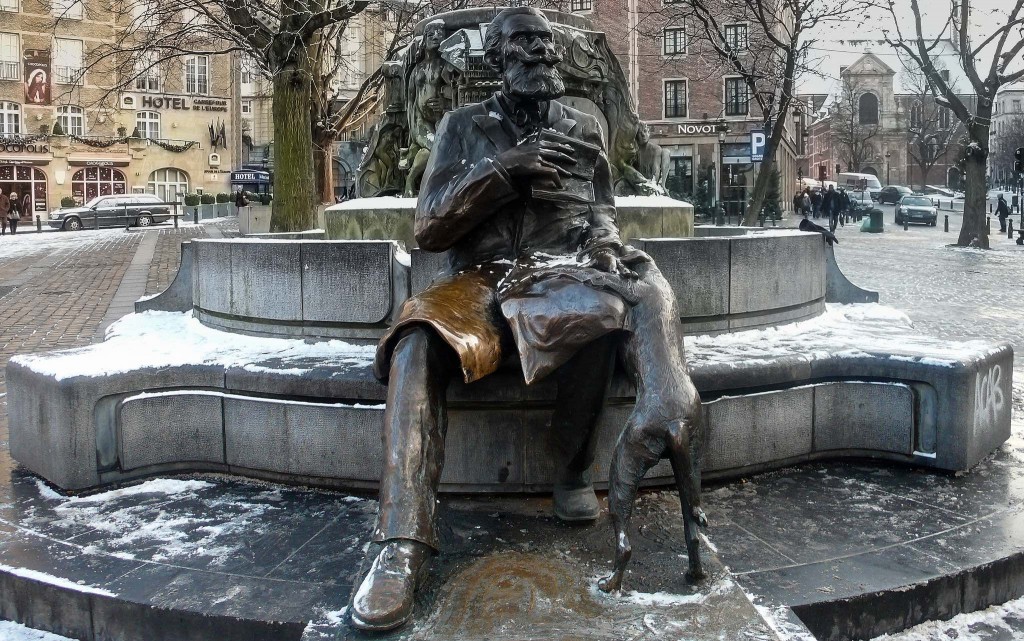 The world-famous little blue dwarves we call Smurfs are a Belgian invention – and this immense one on his mushroom isn’t about to let you forget it.

Grasmarkt, next to Galerie Horta 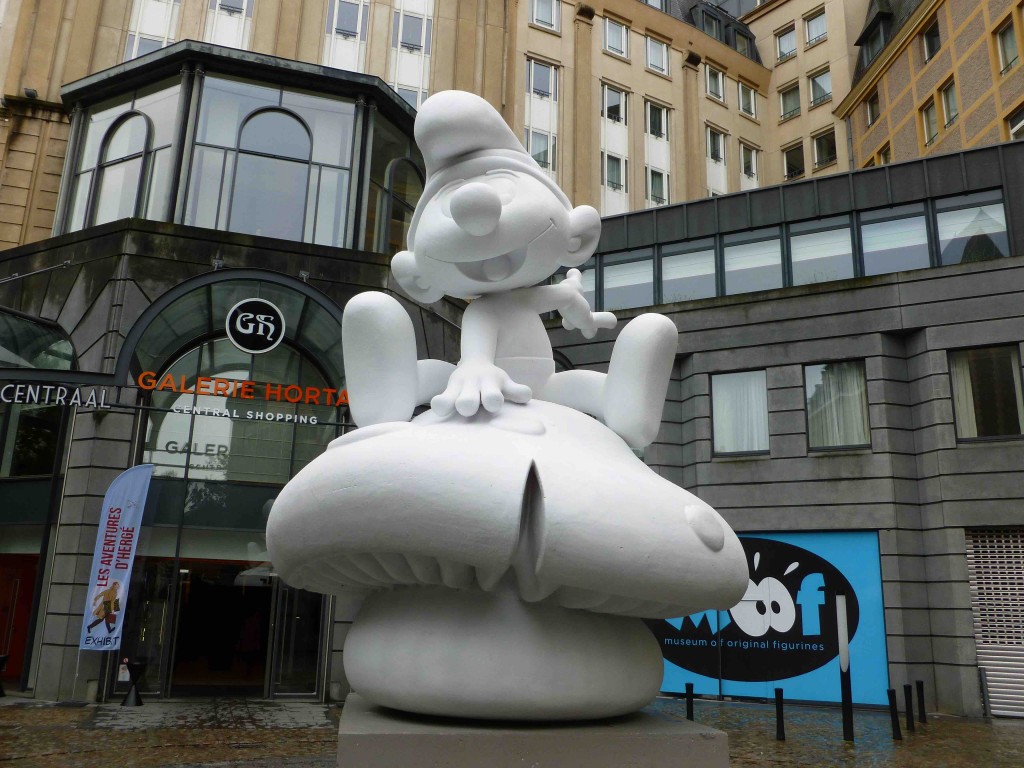 Next we move on to the first green stop on our tour, the tree-lined Brussels Park adjacent to the Royal Palace. The petrified lion that’s supposed to be guarding its entrance doesn’t look equipped to handle any type of wilderness though. 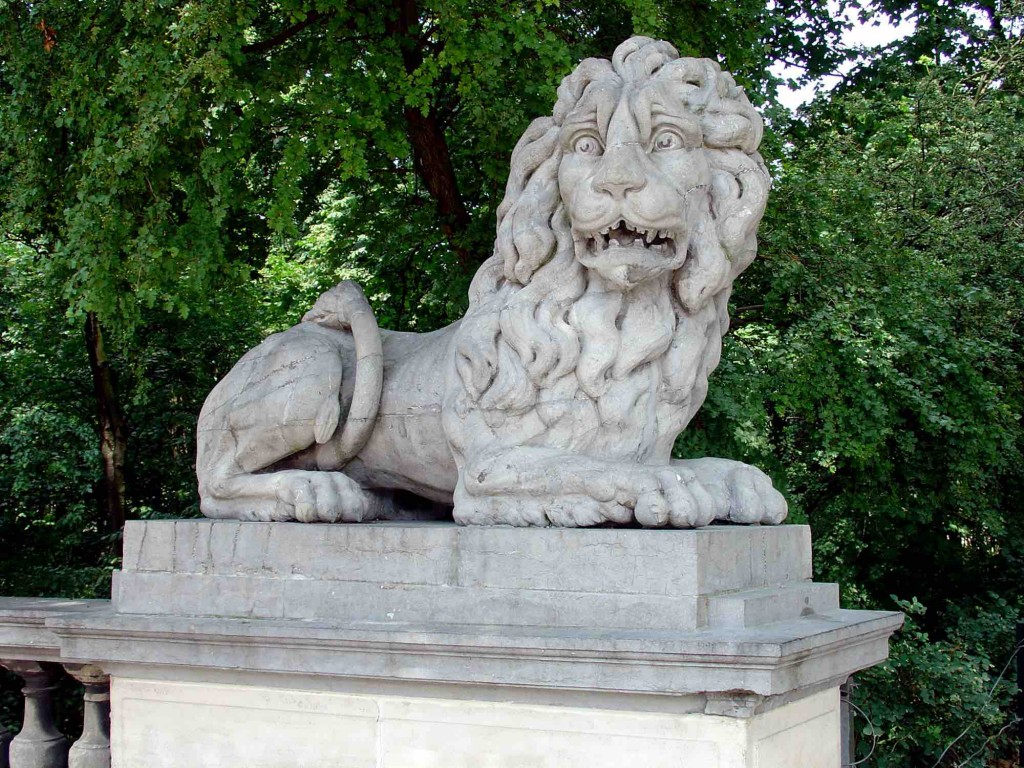 Arriving at the European Parliament, guests are welcomed by a piece of German history in Brussels. Ten pieces of the iconic wall made their way over to the heart of Europe in 2009, and after several wanderings across town this one got a permanent spot at the entrance of the visitor’s center. 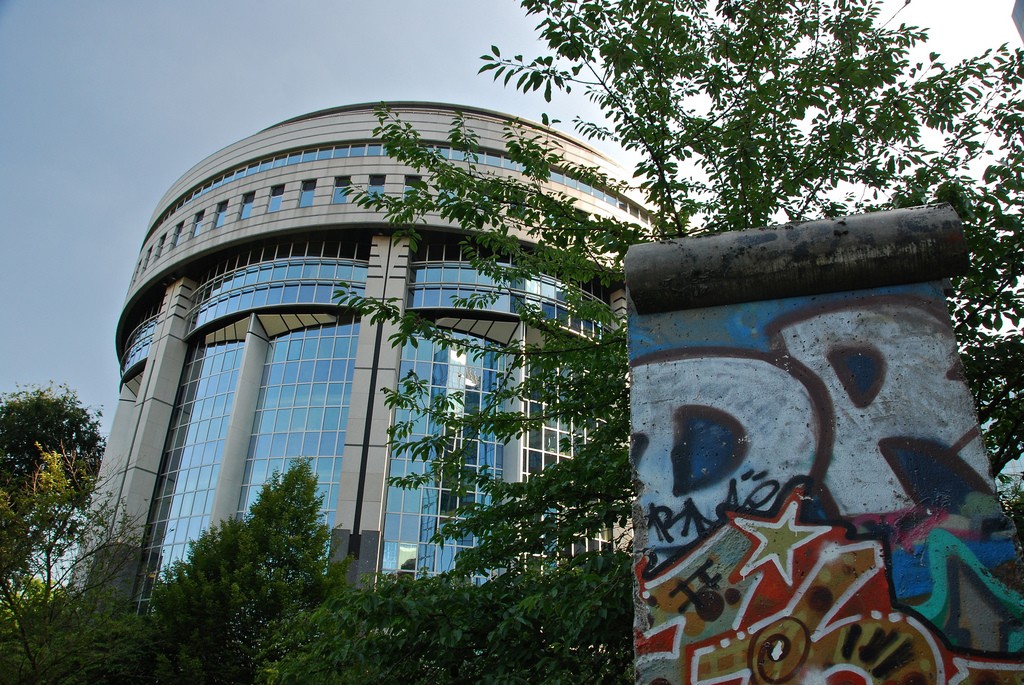 A piece of the Berlin Wall | © Stephane Mignon/Flickr

Now its onwards to the sprawling Cinquantenaire Park and to greet a lucky statue of man’s best friend. The story goes that rubbing the paws of Le Chien will bring good fortune, and the excessive petting this pooch has experienced clearly shows on his smooth bronze legs. 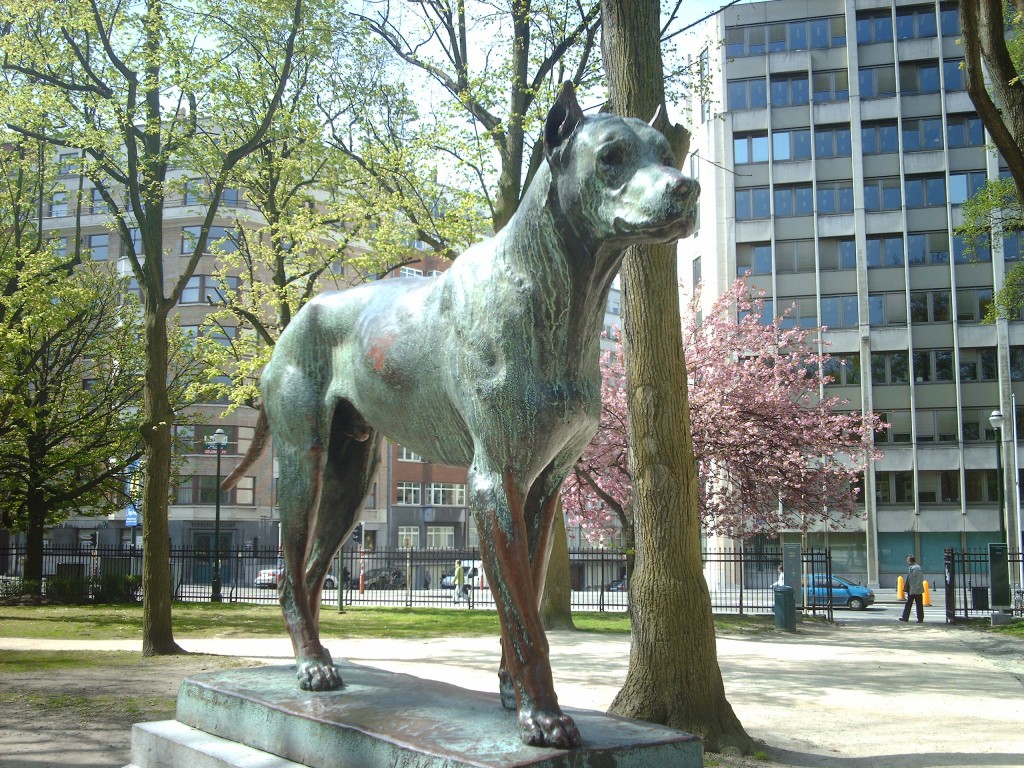 At this point you can lie down on the stretched-out lawns of the Cinquantenaire for a well-deserved rest, or ride on to see the last of Tom Frantzen’s extraordinary sculptures in neighborhood Tervuren. Not one to shy away from a politically tinged message – just think of his gas-masked Angel of Purification in Ghent, raging against mankind’s insidious pollution – The Congo I Presume was the Brusselaar‘s contribution to the Royal Museum for Central Africa (currently closed for renovations) and a reminder of the nation’s colonizing past. Then again, his merry posse of animal musicians (the Banundu Water Jazz Band) brings an unexpected levity to the Palais des Colonies. 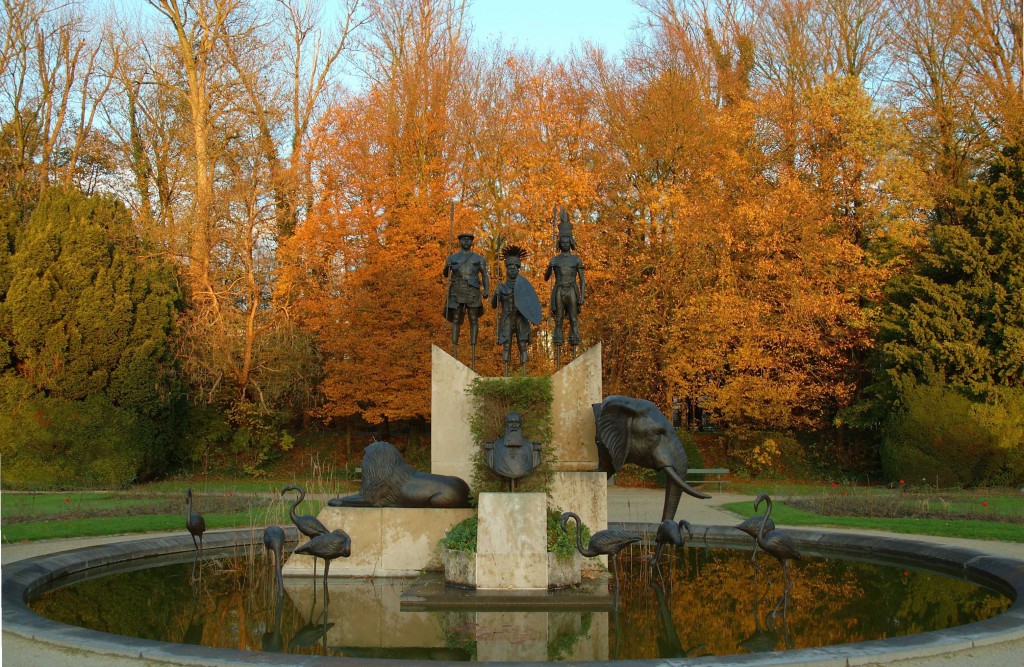