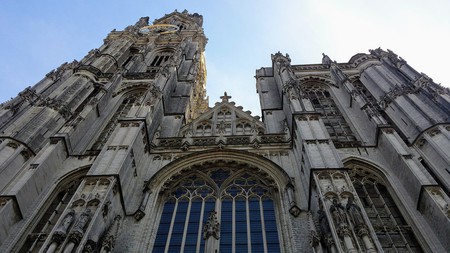 Cathedral of Our Lady of Antwerp | public domain / Pixabay

Being a port city of tremendous wealth, 15th and 16th-century Antwerp was free and keen to be wildly ambitious when building its religious temples and civic buildings. To this day, city palaces and churches in the Brabantine Gothic style typical of the region dot the town, transporting the viewer to medieval heydays with white vaulted ceilings and lace-like spires.

Cathedral of Our Lady

From most places in the old historic core, the north tower of Antwerp’s Cathedral of Our Lady can be seen peeking out. At 123 metres (403 feet) high and with patterns in its spire so detailed it often gets described as stone lacework, this lady is perhaps the most iconic landmark in the port city. As the largest Gothic church in the Low Countries, it took 170 years to complete from 1351 onwards.

Inside, major original works by Rubens and van Dyck lend more flair to the already impressive interior, which awes with monumental white vaults and columns. The early 16th-century stained-glass window by Nicolas Rombouts, Last Supper, is another masterpiece, as well as the 14th-century Madonna with Child by the anonymous sculptor known only by the mysterious eponym ‘Master of the Maasland Marble Madonnas’. 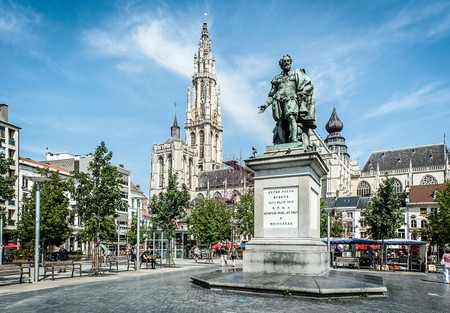 The Groenplaats square, with the Cathedral of Our Lady in the background | © Sigridspinnox.com / courtesy of Visit Antwerp 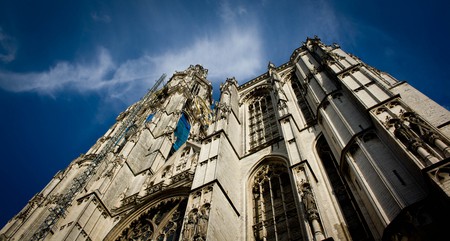 The flamboyant St. James’s Church in the student quarter doubles as the final resting place of Peter Paul Rubens and a stop (or starting point) for pilgrims headed to Santiago de Compostela. The site has held this latter function ever since 1431, when there was still a chapel in its place. Works on the late-Gothic temple we know now started near the end of the 15th century and lasted until the middle of the 17th. By that time the Baroque style was in full swing, explaining the Church’s interior: an opulent sea of marble, wood-carved choir stalls and no less than 23 altars. 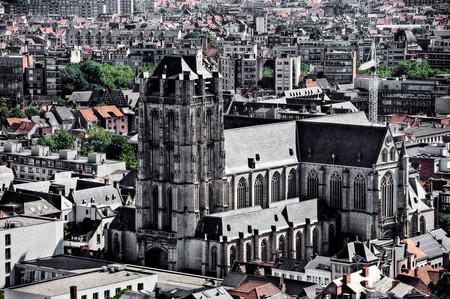 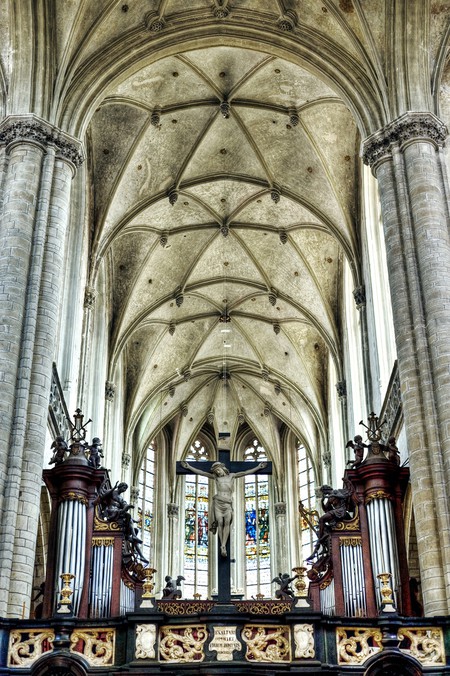 Commissioned and paid for by Antwerp’s wealthy Butchers’ Guild, the Vleeshuis (or ‘Meat House’) known in English as Butchers’ Hall now serves as a museum to give visitors an idea of what daily life was like in Antwerp in the Middle Ages. A stone’s throw from City Hall and its surrounding group of 16th-century guild houses, it’s yet another symbol of the power and wealth Antwerp wielded during its Golden Age.

Given the growing population, the civil building was needed to replace the former covered butchers’ hall. As the merchants’ home doubled in size, it also came to reflect the guild’s status thanks to its grand Gothic façade. Around 60 butchers sold their cuts of meat on the first floor for 300 years here, while the animals were slaughtered in the expansive cellars below and on a nearby hill outside still known as the Bloedberg (‘Bloody Mountain’). 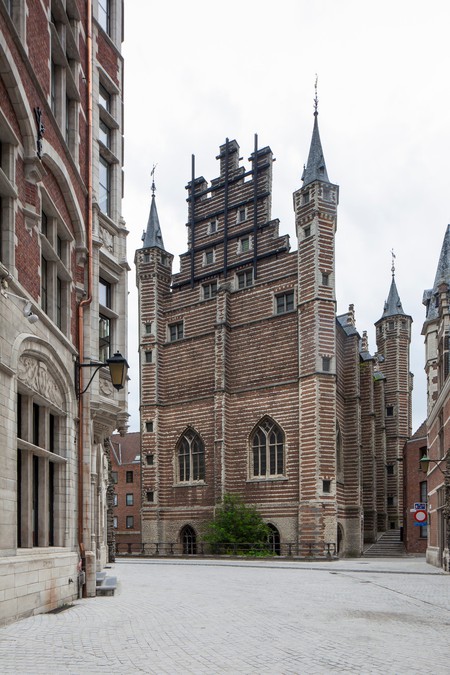 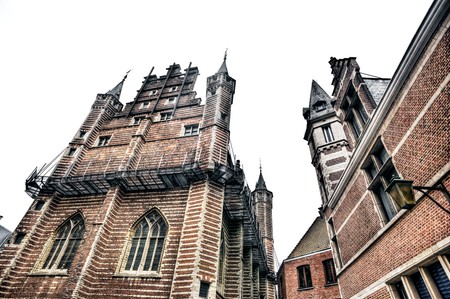 Similar to St. James’s Church, St. Paul’s is Baroque extravagance topped with a remarkably consistent Gothic coating. The former Dominican church by the river Scheldt is an especially elegant example of how a lush décor can pair beautifully with a more sober outer layer, namely the Gothic sandstone exterior. Pieces by Rubens, van Dyck and Jordaens are to be found, as well as an exorbitant number of life-sized religious sculptures. These reign both indoors and out, most notably in a rich calvary depicting Jesus’s final days. The church’s walled-off garden around the corner is one of the most secretive and tranquil spots in the city. 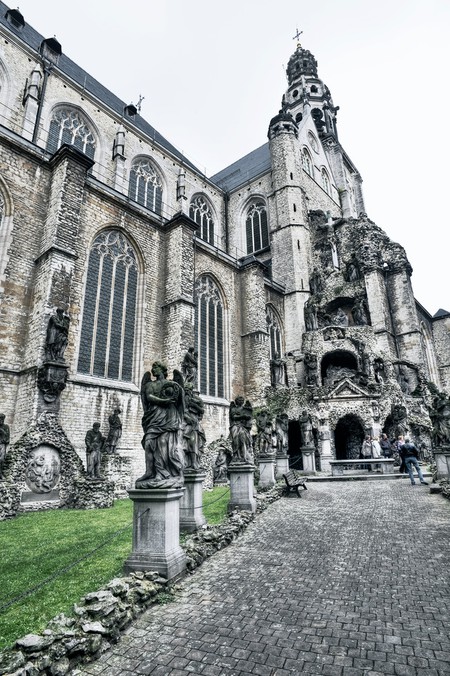 Another Gothic design feature that’s guaranteed to inspire awe, and one which Antwerp has plenty of, is the trefoil. Hof van Liere in the university quarter is a magnificent example of stone trefoils at their most grandiose, commissioned by then-mayor Arnold van Liere himself. Today the city palace’s courtyard and lawns are filled with criss-crossing students making their way to class or the library, or picnicking and enjoying the sunshine on its lawns.

In the heart of one of Antwerp’s hippest neighbourhoods, St. Andrew’s and its octagonal bell-tower rise up. The church was designed by master of Gothic architecture Domien de Waghemakere – the same who thought up the Cathedral of Our Lady’s famed spire – but has known a turbulent history. Founded by Augustine friars in 1512, the original occupiers were soon driven out by Emperor Charles V in a violent act that created the first three Protestant martyrs in history. Side chapels, aisles and towers kept being added until the end of the 17th century, yet meanwhile great damage was being inflicted by the Iconoclasts and later by French Revolutionists. Thankfully, pearls like the 17th-century high altar and the monument erected in honour of Mary, Queen of the Scots, have survived. 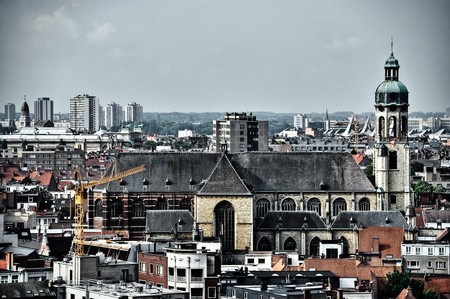 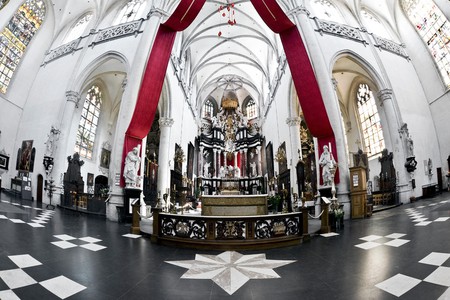