A Solo Traveler's Guide to Belgium 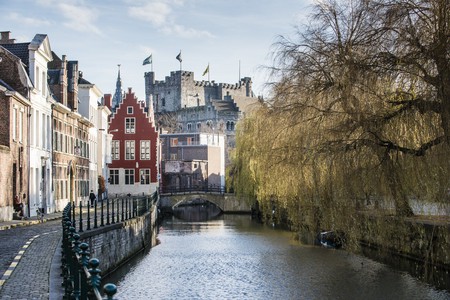 Traveling alone can be exciting, scary, eye-opening, and usually comes down to a mixture of all of the above. Considering your next solo destination, Belgium should get shortlisted not just for its convenient pint-sized stature, but its distinctive and lively cities, surprising in their hipster charm and historic in their roots. Below, we go into detail on the stops a solo explorer shouldn’t miss.

Largely undiscovered by the international traveler, Mechelen is a small city in full bloom. Rehabilitated from what was about the worst reputed historic hub in Flanders to a thriving, multicultural place that young couples and families are flocking to in increasing numbers, it’s currently begging to be rediscovered. Widely praised for the turnaround, mayor Bart Somers recently received 2016’s World Mayor Prize and threw a party for the entire city, at once emphasizing how much Mechelen still feels like a Flemish village, only with a plethora of different cultures thrown in. Easily reachable by train as the premier stop between Antwerp and Brussels, there’s hardly an excuse not to discover Mechelen before the rest of the world does.

Mechelen thoroughly enjoys a good market day. While Saturdays are bombardments of foods and fragrances, lazy Sundays often start with a saunter over the Curiosamarkt, where genuine antique treasure is known to pop up amidst the knick-knacks, lampshades, and dirt-cheap LP’s. It’s really the haggling and general laid-back mood that deliver surefire charm, however. In the idyllic city core, the UNESCO-listed large beguinage, belfry, and St. Rumbold’s Cathedral attest to the town’s medieval past and famed carillon culture. A clamber up the Cathedral’s glass skywalk provides a unique perspective on the city, and so does a Jesus-style stroll over the Dijlepad, a wooden walkway that floats above the river and takes you all through town. 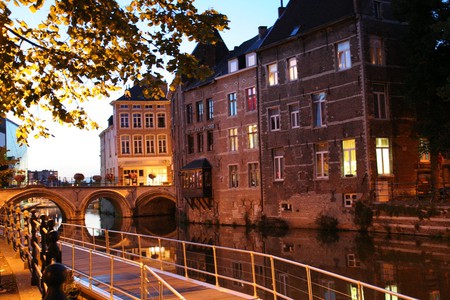 On the Wollemarkt, next to St. Rumbold’s, the burger is worshipped in gourmet form. At Il Cardinale, Virgin Mary statuettes line the walls and burgers receive religiously tinted names (Holy Guacamole, Noah and the Fish, etc.). Around the corner, also in the Cathedral’s shadow, a wonderful brown bar lies in wait for a solo traveler to smack his lips to his first Gouden Carolus, Mechelen’s signature brew. As the smallest café in town, with tables packed cozily together, you’d have a hard time extracting yourself from Borrel Babbel without getting caught up in a chat with the locals. In cute lunch nook Bokes & Co., on the Korenmarkt, students and grandmoms alike unwind with sandwiches, tea, and coffee served on a pleasant mishmash of exclusively second-hand furniture. Tavern Zennegat 13, squished between two waterways, seems to epitomize charming authenticity, and Kaffee Ine is considered a golden oldie when it comes to the black gold we call coffee. 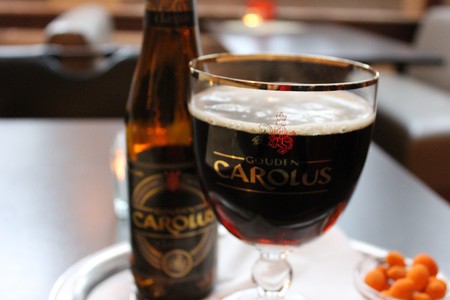 A lush, tranquil stay is guaranteed inside Martin’s Patershof, a converted church with a distinctive stately feel. Then again, solo travelers might want to warm themselves on the open fireplaces inside the rooms of Hotel Vé, a former fish smokehouse/cigar factory, or on the hospitality and kindness of fellow backpackers at hostel De Zandpoort.

As Belgium’s resident capital of cool and a counted-upon fashion harbinger, the hunts for vinyl and clothing treasure are just a couple of Antwerp’s favorite pastimes. Neighborhoods worth scouting out include Het Eilandje, dominated by the sea-loving MAS Museum, and the townhouse and boulevard-rich Het Zuid, where art galleries and a lively bar and restaurant life go hand in hand. Speaking of impressive boulevards, a peek at the eclectic Cogels-Osylei usually leaves architecture aficionados stunned in their boots. In summertime Park Spoor Noord is sunbathe, barbecue, and picnic central, with shade and refreshment to be found in the fountains and at Bar Cargo inside an old railway hangar. Rubens’s old house-cum-atelier and the site of one of Europe’s oldest book printing businesses are both huge sources of pride and joy for the city. 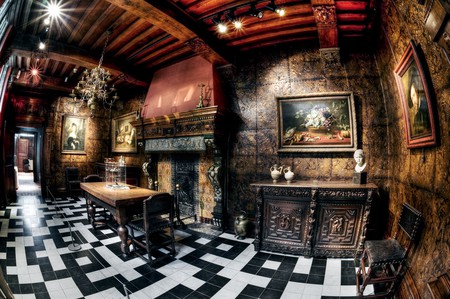 A little ways from the historic core on the southwest edge of the city center, the Zurenborg district boasts two squares ideal for low-key dinner or drinks. At the end of the aforementioned Cogels-Osylei, the circular Draakplaats is split up by a bridge and tram tracks, yet cozy places such as gastropub Wattman, gay-friendly institution Den Draak, and Cuichine (Kantonese and South-Chinese specialties) have made it a summer evening hangout. The bridge has even added to local charm, with concerts and tango nights regularly taking place underneath. A three-minute walk further, the Dageraadplaats forms a second hospitable nest on warm days and nights. Dotted around its basketball field are pubs and eateries galore, and from their terraces the view of the LED-light grid that starts to shine in the evening serves as an alternative starry night’s sky. 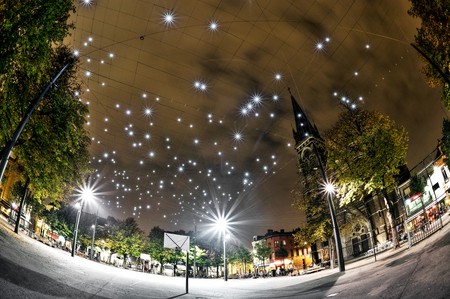 Budget-conscious travelers are sure to find a warm and familial atmosphere at Bridget and Greg’s Antwerp Backpackers Hostel, where the coffee and local tips flow free. Fantasizing about owning your own residential townhouse bursting with character and vintage knick-knacks is easy at bed and breakfast Boulevard Leopold (moderate), and busy, pattern-loving design doesn’t come much more tasteful than at boutique hotel De Witte Lelie (luxury). 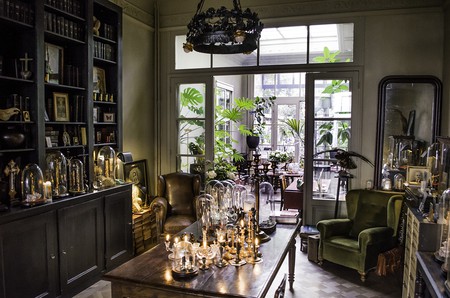 First off, pop into Ghent’s Saint-Bavo’s Cathedral to lay your eyes on the most coveted artwork of all time—a massive altarpiece by the Van Eyck brothers known as The Adoration of the Mystic Lamb. A drop by the revered S.M.A.K. Museum, housing the largest collection of contemporary art in the nation, is another must, along with exploring strolls down the canalsides, the medieval Patershol quarter, and the historic town core. Some hostels offer daily walking tours in English free of charge. 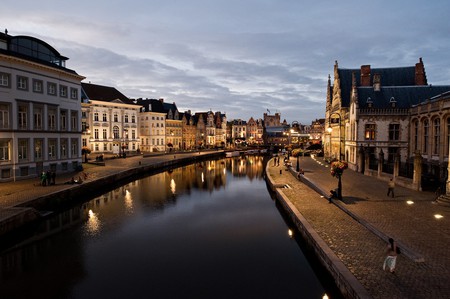 The Graslei, a core relaxation spot in the ancient city core | courtesy of Visit Ghent

If a nice meatless dish is your thing, Ghent basically holds the keys to the veggie kingdom in Belgium. The city is positively full of vegan and vegetarian buffets, take-outs, eateries, and biological markets. More into meat (one stall is literally called “carnivore”) but equally divine, the new Holy Food Market inside a converted 16th-century chapel has 17 booths switching between Flemish classics and international flavors, and is perfectly suited for solo travelers looking for a quick and quality bite. 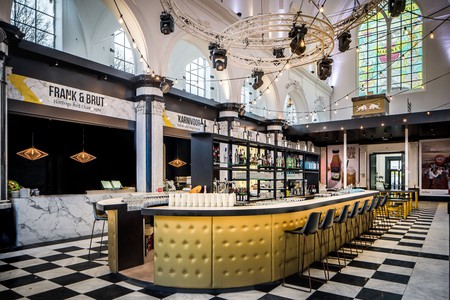 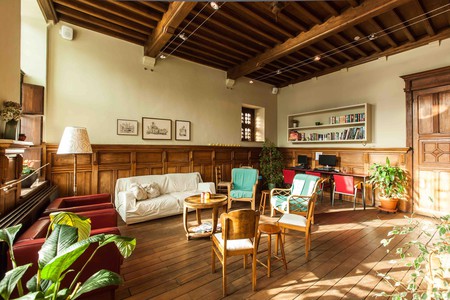