A History Of Antwerp’s Plantin-Moretus Museum

Along the river Scheldt near the Westerschelde estuary lies Antwerp, Belgium’s second largest city and one of the busiest ports in Europe. The city of Antwerp is recognized as the industrial and cultural center of northern Belgium, while more recently emerging as a significant member in the world of fashion design. Antwerp’s long history has filled the city with a long list of noteworthy attractions and a veritable gem amongst them is the stately Plantin-Moretus Museum. 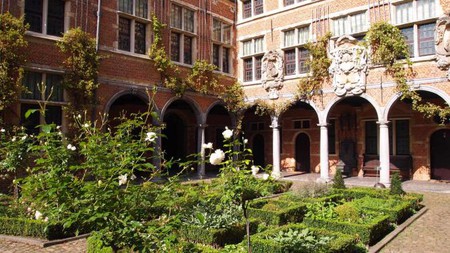 The Plantin-Moretus is a unique museum that celebrates the history of European printing through the former workshop and home of the city’s most celebrated printer, Christophe Plantin. A book binder by trade Chistophe Plantin relocated to Antwerp from France with his family around the year 1550. Initially, he established himself as a book-binder, but one evening in 1555 he was grievously injured by a group of thugs. Though Christophe recovered, he could no longer work as a book binder and decided to become a printer. As with his earlier business he prospered and firmly established himself and his workshop, named The Golden Compasses, as one of the best printing houses in Antwerp. His business grew and he decided to relocate into a larger building on the Vrijdagmarkt in the year 1576. By this time there were between 16 and 22 presses in operation and over 80 employees. His workshop was the most industrial of its kind until the beginning of the 19th century. 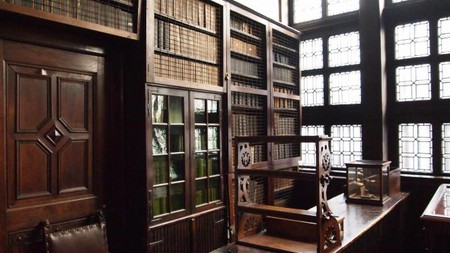 Christophe Plantin had settled in Antwerp because it was then the center of northern European trade and consequently the largest city north of the Alps. The city had many printers and to set himself apart from them, Christophe endeavored to make superior quality prints. The Geography Room exhibits many of Christophe’s detailed maps made at the shop. Antwerp in his day was the center of cartography and many great cartographers like Abraham Ortelius preferred Christophe’s craftsmanship. 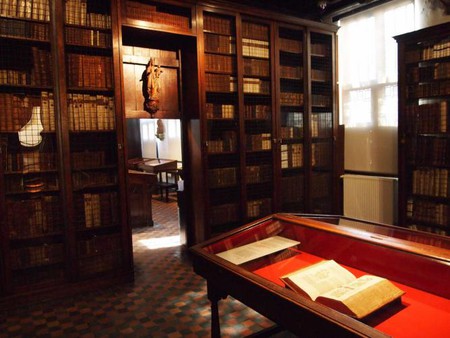 Throughout the museum books are presented thematically, as in the Moretus Room with selections of the family’s printed works throughout the centuries, the Foreign Printers Room with works from printers across Europe, and the Gutenberg Room with a complete 36 line Guttenberg Bible. The Humanist Library beautifully illustrates a 17th-century private library, while also showcasing a small portion of the books held in the Moretus Museum Collection. Christophe first started the library for the practical purpose of owning the text of works he would print or the types of a manuscript he wished to copy (early printers purposely modelled their types on medieval manuscripts). Over time more books and manuscripts were added to the library and later museum curators purchased 90 percent of the works printed at the printing house which makes it the most complete collection of Plantin-Moretus books in the world. 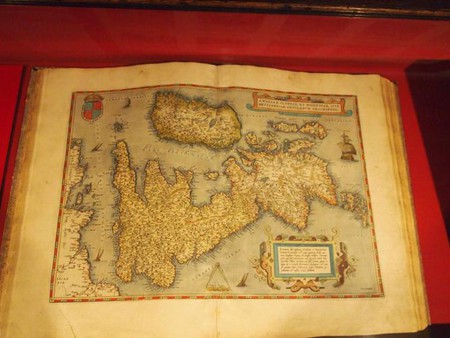 The long term success of Christophe Plantin and The Golden Compasses was secured by two tenets of their family. First their family motto of Labore et Constantia (Work and Constancy) was imparted to each successive manager of the company by the example of its founder. Christophe Plantin strived for quality and reliability throughout this life and continued his work even after an investigation from the inquisition, during which time he temporarily relocated to Holland. Once safely away he founded a new printing house in the university town of Leiden. Later Christophe persevered during the Spanish Fury and the devastation of Antwerp during the 80 Years War which marked the end of the city’s prosperity. He became one of the foremost printers of the Counter Reformation in Northern Europe and had laid a sturdy foundation for his descendants to build upon. 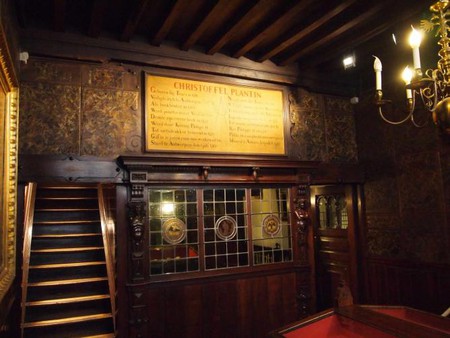 The second important principle was the proviso that the eldest child was not necessarily guaranteed mastery of his father’s workshop, but instead the most capable son would be named heir. This practical measure sheltered The Golden Compasses from mismanagement and was a rule from the beginning since Christophe Plantin’s only son died young and he had five daughters. Later he decided to will his printing house to his apprentice Jan Moretus. Jan had married Christophe’s daughter Martina Plantin in 1570. Christophe’s workshop in Leiden was managed by his second apprentice and son-in-law Franciscus Raphelengius. Ten generations of the Plantin-Moretus family would manage The Golden Compasses until finally in 1876 Jonkheer Edward Moretus sold the workshop in its entirety to the Belgian state for its preservation and transformation into a museum, granting access to the public. 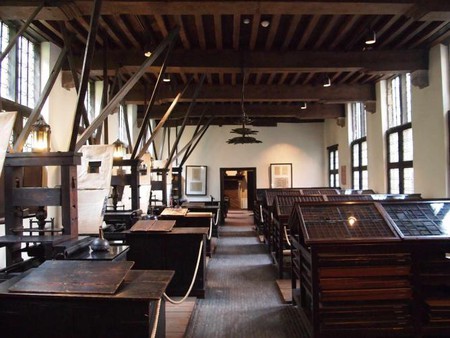 Today the charm of the Plantin-Moretus Museum is almost intoxicating when visiting the numerous rooms of the estate. The Corrector’s Room, the Office and the Justus Lipisus Room animate the pages of history and illustrate a world filled with stories of New Spain, the East Indies and the religious wars between Protestants and Catholics. The printing room and typesetting room are so pristinely preserved it would not seem strange for an apprentice to appear with sheets of paper or ink. The bookstore – built in the beginning of the 18th century – opens to the street, and is so picturesque that it is easy to imagine passers-by wearing wigs and feathered hats. This museum is a rare example of living history smoothly rendered into a tourist attraction that exposes the past so tangibly that the smell of drying ink, pipe tobacco and rabbit stew will drift through the windows. 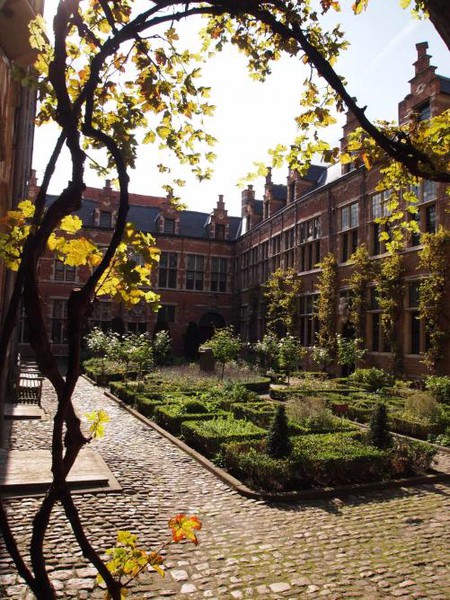 View of the Inner Court from Under the Arcade / | © James Radke

The history enthusiast, or curious traveller looking for a unique day in Antwerp, must visit the Cathedral Onze-Lieve-Vrouwe, Rubenshuis and the Pelgrom Taverne (located in a 15th century cellar lit by candlelight) for a hearty meal accompanied by a Trappist beer. To complete the day, spend a few hours exploring the Plantin-Moretus Museum. Don’t miss out on the list of prohibited books (Index Librorum Prohibitorum) which is hanging in the 18th-century bookshop.