A History Of The Belfry Of Bruges In 1 Minute 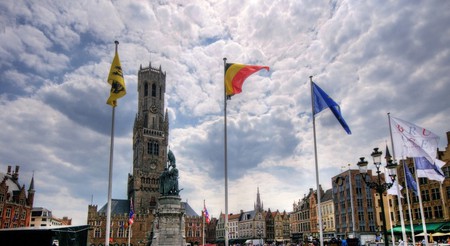 The most famous landmark in a medieval city that is filled with them, Bruges’ Belfry has been watching over the main market square for eight centuries. Its 366 exhausting steps, sweeping top view and appearance in the cult film In Bruges have earned the tower a international renown.

As Ken reprimands Ray in the 2008 film In Bruges, only ‘about the worst tourist in the world’ isn’t into the glory and panoramic sights that climb of the Belfry yields. An ascent of the hundreds of steps will not only foster a good night’s sleep and a stunning view of Bruges’ lush green countryside, it also provides a look at the city’s historic and still-operating carillon. During the summer, the chimes of its 47 melodious bells can be heard throughout the city in many a concert. 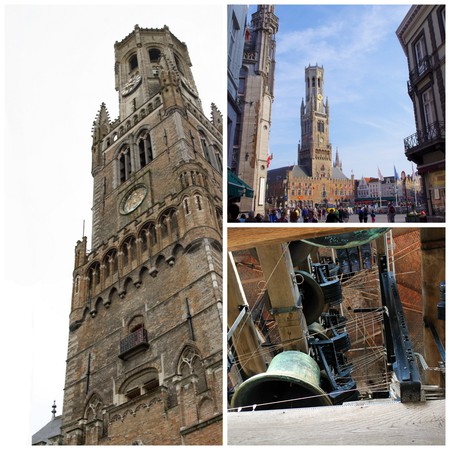 Of course those bells weren’t always used for such harmonious and frivolous purposes. During the Middle Ages the sounds coming from the Belfry governed the lives of Bruges’ men and women from sunrise to sunset. The 83-meter high tower alternately functioned as a clock, a soundtrack to holidays and market Sundays, and even as a fire alarm. Irony has it then that great parts of it have been taken out by flames no less than three times.

The first tower in fact had only been standing a mere forty years before a devastating fire destroyed it – and the precious city archives housed in it – in 1280. The Belfry and its market hall were largely rebuilt and the octagonal top we see today was completed by 1486. The ill-considered wooden spire with Saint Michael icon that accompanied the top didn’t live to see a decade however, as it was turned to ashes by a lightning bolt in 1493 and took the tower’s bells down with it. When the second spire too fell prey to flames in 1741, the Bruggenaars admitted defeat and opted for a Gothic-style parapet to crown the Belfry’s top instead.

Though patching the tower up was a hassle every time, looking back we know that the Belfry’s fiery past has actually served to shape the tower into the unique structure we see today. Gothic on top and 12th century medieval at the bottom, Bruges’ most famous monument speaks to many a creative mind, as proven by its appearances in David Mitchell’s acclaimed novel Cloud Atlas and – oft-referred to in this article – Martin McDonagh’s beloved cult classic In Bruges.