A History Of Belgium’s Groeningemuseum In 1 Minute

Widely famed for its Flemish Primitives, the Groeningemuseum also has some nice Neoclassical and Expressionist pieces up its sleeve | Courtesy of tourisme Brugge, ©Jan D'Hondt

World-renowned for its impressive collection of Flemish Primitives, the Groeningemuseum in Bruges has a lot to thank to its city’s prosperous past. Located in an area rich in both artists and funds, the museum was able to develop a superb, expertise collection of painters from the Low Countries, Jan Van Eyck and Hans Memling included.

The Fine Arts Museum of Bruges, better known as the Groeningemuseum, has become somewhat of a mecca for fans of the better (early) Netherlandish paintwork. Names such as Jan Van Eyck, Hans Memling and Gerard David ring like bells in the ears of both novices and connoisseurs. Given that works from the Flemish School were widely dispersed after the French Revolution and French occupation of the Low Countries, their collective presence in the museum is striking. 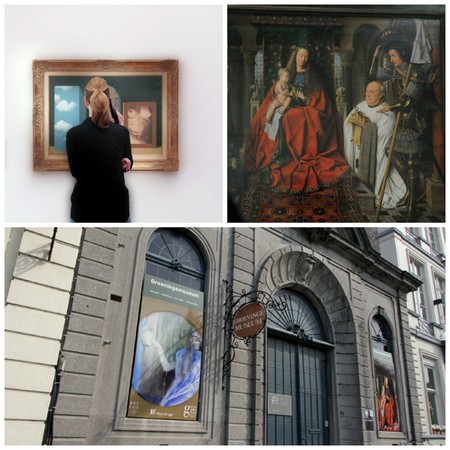 Yet it is no sheer coincidence that so many of the masterpieces have found their way back to their area of origin. And neither is it luck that had painter gods such as Van Eyck, Memling and David all settling down in Bruges for significant stretches of time. As a medieval port hub of immense wealth and a bona fide aristocrat magnet, it was only logical for the city to care about painters who could depict and enhance this glamorous Golden Age. The mutual fondness between the city and its artist population has lasted up until this day, and is the main reason why the Groeningemuseum came to be.

The origins of the Groeningemuseum can be traced back all the way to the beginning of the 18th century, when the local Academy of Arts was gifted a collection of paintings that were previously housed in City Hall. Among them: The Last Judgement by Jan Provoost, and Hugo Van der Goes’ Death of the Virgin. Soon it became customary for artists and benefactors to donate paintings to the Academy, and by the early 19th century Hieronymus Bosch’ Triptych of the Last Judgement made it into the collection. This was around the same time that Van Eyck’s and Memling’s masterpieces – Virgin and Child with Canon Joris van der Paele and Moreel Triptych respectively – made their way back home.

With some of the Old Masters’ most prized works in its possession, the Academy gave back the entire collection to the Bruges government in 1892. Thus the Fine Arts Museum of Bruges was born and built on the grounds of the medieval Eeckhout Abbey – fine news for the rising number of travelers who have started flocking to the city after hearing about the medieval quaintness it has managed to hold onto.