A Brief History of Brussels’ Train World and Schaerbeek Station 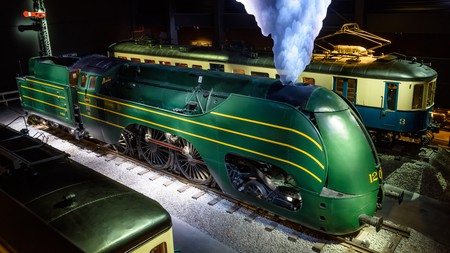 Train World is one of the newer museums in Brussels, opening its doors in 2015. This haven for train lovers can be found in the beautifully renovated Schaerbeek station, housing the oldest locomotive in Europe, along with 21 others.

Nineteenth-century steam locomotives, trains built to transport royalty, a postal wagon, a restaurant wagon, a hospital train and even a wagon decorated by Belgian surrealist Paul Delvaux are all treasures that can be found at Train World. These relics of Belgian railways used to be spread out over five different locations, but since September 2015, this precious collection has finally been reunited in Schaerbeek station. A protected building dating back to the late 19th century.

An 8,000-square-metre space exhibits steam-powered beasts such as ‘The Atlantic”, a high-speed locomotive that broke the speed record in 1939 by reaching 120km an hour – the only one of its kind left. For its ultimate showpiece, the museum has Le Pays de Waes, the oldest preserved European locomotive that was built in 1844. There are also full-size replicas of Le Belge and L’Éléphant, two of the first trains to ever glide over Belgian tracks. Luxurious carriages show how Belgian monarchs Leopold II and Albert I traveled in the utmost comfort, while the opposite is true of the wagon on display that was used to deport Jews during the Second World War.

As well as trains, there is a collection of authentic objects, models, films, posters, books and even an original bridge that was used in the 19th century in Namur. To keep in touch with the human aspect of the industry, the museum has preserved at its heart an existing railway cabin that used to house a watchman. Walking through the museum, it becomes clear how Belgium – the first country on the European continent to open a public railway in May of 1835 – embraced the vibrant heyday of trains.