A Brief History of Belgium’s Doudou, and Why You Should Attend 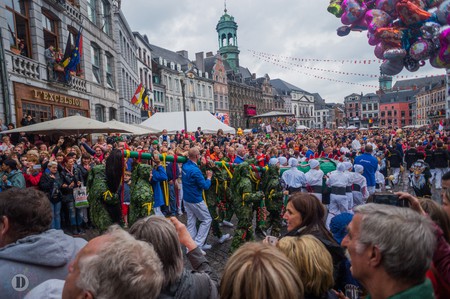 Thousands of bystanders stand with necks craned, cheering on Saint George as he goes into battle with the ferocious dragon in a small circle in the middle of Mons’ Grand-Place. The curious scene is a highlight of the Belgian city’s Doudou festival, an ancient feast of lush parades, fights with wicker monsters, and buckets of crowd participation.

Up in the forested Belgian Ardennes, slightly bizarre folkloric celebrations have long been a part of the annual diet – just think of Binche’s carnival with its white-masked, orange-pelting figures, or Andenne with its bear-filled streets. Local identity and pride in one’s cultural heritage play a major part in these festivities, and they are, in fact, the reason they still exist today, and this is no less true in Mons’ case. The 800-year-old Ducasse de Mons on Trinity Sunday, lovingly dubbed ‘le Doudou’ by locals, is perhaps the most raucous of them all. As Saint George on horseback and a giant wicker dragon make their way to the middle of the main square for their epic brawl, members of the crowd jump forward to try and grab a handful of straw from the mythical beast’s tail. A handful of its hairs, legend has it, will bring brave audience members luck. 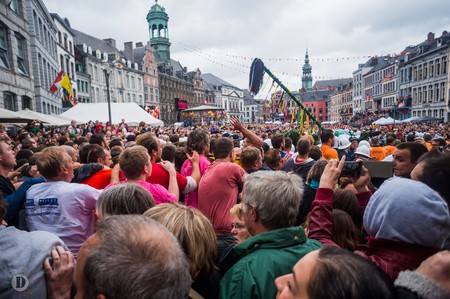 Before the meticulously choreographed “Battle of the Lumeçon” begins, however, visitors are reminded that the dragon isn’t the only adversity Mons has had to reckon with in its history. Indeed, true fans have started the day’s celebrations off much earlier in the Sainte-Waudru Collegiate Church. Here, the shrine of Sainte Waudru, foundress of the city and miracle worker, is taken out in the morning to meet a temple overflowing with worshippers. Believed to have saved Mons from a sweeping plague in the 14th century, the holy woman’s relics are loaded onto an elaborately decorated wagon called the Car d’Or (“the Golden Cart”). 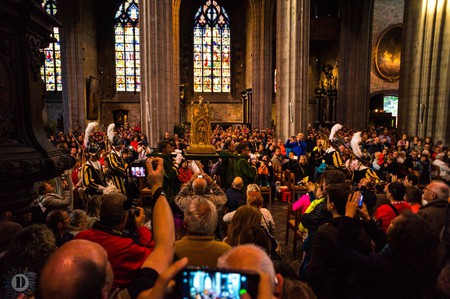 A whole parade of local organizations dressed up in medieval garb join the procession, and when the draft horses pulling the ornate wagon invariably struggle on one particularly steep alley, the watchful masses never fail to reunite forces and help them up the slope. Locals especially have a stake in this: superstition has it that if the cart doesn’t get up in one try, bad things await the city. Meanwhile, the daredevils who plan on doing some tail-grabbing later have had the opportunity to gain a little liquid courage at the food and drink stalls lining the parade’s route. With each victory – getting the cart up the hill, the slaughter of the wicker dragon – the audience yells out joyously: “Et les Montois ne périront pas!” (“And the people of Mons will not perish!”). Folklore fans who are longing to join in know where and when to plan their next trip.